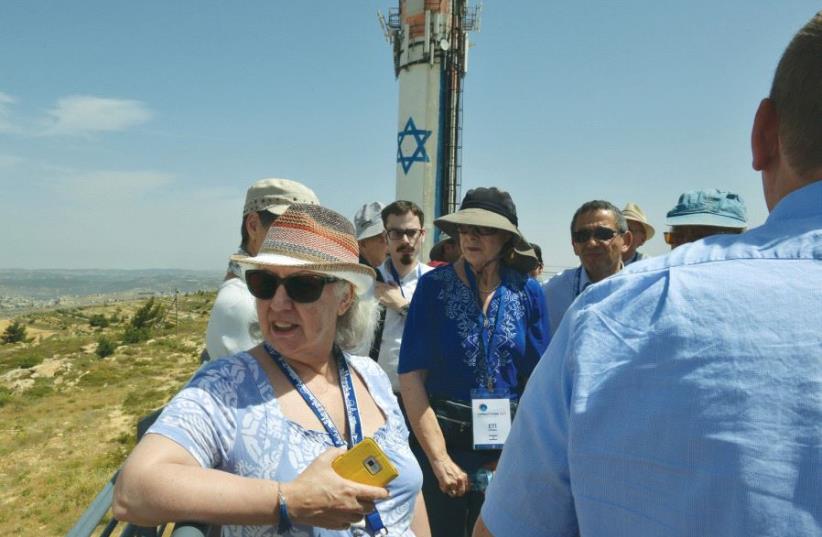 THE GROUP takes in the view from Neveh Daniel, a settlement in western Gush Etzion, on Thursday.
(photo credit: YEHUDIT HOFMAN)
Advertisement
The World Zionist Organization led a unique tour of progressive Jewish leaders from around the world to Gush Etzion on Thursday, in a bid to present participants with an alternative viewpoint and quash preconceptions about the settlements and their residents.The initiative was a collaboration between WZO and the World Union for Progressive Judaism, many of whose members were in Israel for its 38th annual CONNECTIONS conference.The packed bus, carrying some 50 participants, was one of five heading to different areas of the country to tackle a variety of hot-button issues.The group was accompanied by Gael Grunewald, head of the WZO’s Settlement Division, and Gusti Yehoshua Braverman, chairwoman of the WZO’s Department for Diaspora Activities.Noting that the dominant voice emanating from the movement is critical of the settlements, the tour sought to provide participants with a first-hand experience of communities located over the Green Line.As the bus headed to Gush Etzion, Braverman urged the passengers to come with an open mind. “I see great importance in the fact that members of the World Union for Progressive Judaism can learn about Judea and Samaria detached from the context in which they are accustomed, and will receive a true picture of what is happening, neither ignoring politics but also not providing political bias,” Braverman said.Naturally, residents of the settlement bloc do hold their own political opinions, and former deputy mayor of Gush Etzion Moshe Saville, with whom the group met first, expressed opinions reminiscent of those touted by Education Minister Naftali Bennett (Bayit Yehudi).“The Palestinians have a state in Jordan and in Gaza and they ruined it all,” he said, explaining why he does not support the two-state solution.He said that in Gush Etzion, the people have a “down up” approach to peace, having daily exchanges with their Palestinian neighbors in the supermarket, for example, or through the work of paramedics in the settlements who treat Israelis and Palestinians.Occasionally, he said, they even invite one another to weddings.Saville and Grunewald both emphasized that Jews inhabited the area well before the establishment of the State of Israel in 1948.After hearing from Saville, the group visited the Pina Chama (“Cozy Corner”) for soldiers, established by two widowed residents of settlements in Gush Etzion after they lost their husbands in terrorist attacks. Ruti Gillis spoke to the group of her desire to create something positive out of her grief, resulting in this coffee pit stop where soldiers can rest, eat, drink and interact with residents from the area.The group also heard from Shani Abrams Simkowitz, executive director of the Gush Etzion Foundation, about why she decided to leave the US to live in a settlement.From there, the group went to the Gush Etzion Visitor Center at Kibbutz Kfar Etzion, a memorial to the men and women who lost their lives defending the communities of Gush Etzion – strategically located between Jerusalem and Hebron – in 1947, before the outbreak of the War of Independence. The film relates how some of their children, who were evacuated during the war, returned in 1967 to reestablish their homes there.During lunch, Grunewald told the participants about the Settlement Division’s activities to strengthen existing Jewish communities and to create new ones across Israel and the West Bank. But several participants questioned the support of Diaspora Jews for the WZO in light of their opposition to the settlements.One member of the group remarked that WZO’s lack of differentiation between communities inside and outside of the Green Line is problematic for many Diaspora Jews – a sentiment backed by a French participant who said that the majority of French Jewry would share this view.Rabbi Danny Rich, senior rabbi and chief executive of Liberal Judaism in the United Kingdom, questioned why the Settlement Division is part of the WZO rather than a government department if its purpose is to carry out state policy.But Dalya Levy, executive director of Arzenu – The International Federation of Reform and Progressive Religious Zionists – stressed to the group that the WZO is the “parliament of the Jewish people” and said, “If the world Reform Movement chooses to turn its back on it, then we lose and the State of Israel loses. When you go home, you should sign up and vote for your Reform Zionist slate and express your opinion in that way.”Speaking to The Jerusalem Post toward the end of the tour, participants reflected that while their opinions on the Israeli-Palestinian conflict had not drastically changed, they had gained a deeper understanding of the psyche of settlers.“The overarching feeling I have is the same,” said Josh Dubell, a member of the Progressive Movement in the UK.“However, what it did show me is that we sometimes forget that these are real people, with real feelings, and sometimes the justifications for people living where they live are down to a myriad of factors.Ideology, taking care of family, managing a bank balance or religion. It is important that we came here and understand the nuance of Gush Etzion so that we can educate our young people about the realities.After all, we can all agree that Middle East is a lot of thing, but simple is not one of them.”Rich said that while he had taken part in many tours of this kind, “it’s easy to forget that some of the areas were populated by Jews before the State of Israel was founded, and one has to reflect on that...it just makes the whole issue as we know it even more complicated than it already is.”“You need to be open to have your viewpoints challenged,” added Dubell. “That either strengthens what you believe or has the capability to shift that opinion, and I am proud to be a member of a stream of Judaism that does that.”