Homeless in the Holy City

Those who have fallen through the cracks in Jerusalem are finding a helping hand at the municipality’s emergency services center. 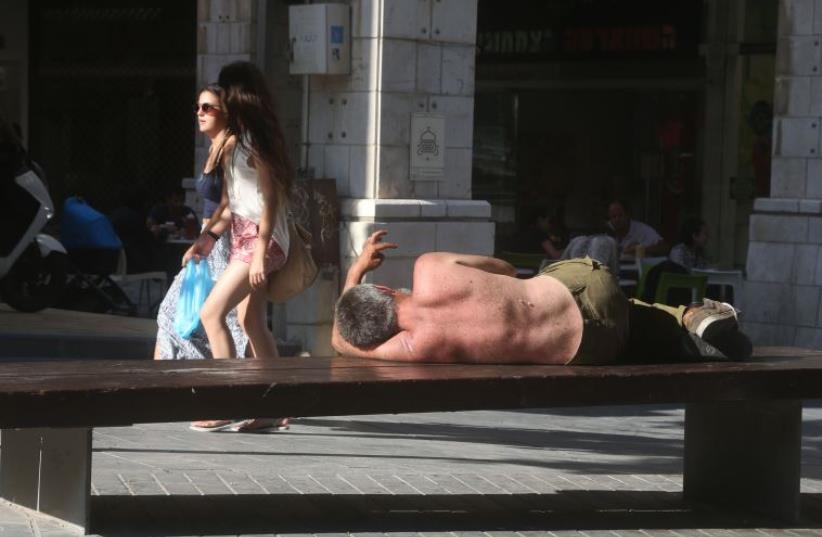 Beggar in Jerusalem
(photo credit: MARC ISRAEL SELLEM/THE JERUSALEM POST)
Advertisement
It’s a Thursday night in Jerusalem – the time for parties, public drunkenness and revelry among the capital’s Jewish youth.The downtown area is flooded with teenagers, but here and there among the gaiety is another side to the Holy City: homeless men and women, and sometimes beggars.On Ben-Yehuda Street, a man with a messy beard and stained tan jacket roots through the trash. Nearby on a bench on Shamai Street, not far from the fun-filled Waffle Bar, another man sips from a plastic cup that holds vodka. A friend sleeps nearby on the sidewalk.
Read More...
Homelessness is a problem in every city in the world. A 2013 survey found 136,826 homeless people in California, but statistics for many places outside the US – where the problem is well-studied – can be hard to come by. On some continents, like Europe, the rise in the number of migrants creates an influx of temporarily homeless people who occupy public areas and parks.Like all cities in the world, Jerusalem faces challenges – such as being a religious pilgrimage center for people who suffer from mental problems – and it has learned to address them with approaches that work elsewhere, such as providing shelters, soup kitchens and halfway houses for those in need.One of those who fell through Jerusalem’s cracks is 34-year-old Binyamin Stern. With his youthful face and broad smile, he looks far younger than his years. The Moscow-born Stern now lives in a shared apartment in a plush neighborhood near the city center, maintained by the municipality’s Crisis Intervention Center.“I came here to study in yeshiva and because I was a Zionist,” says Stern, sitting at his desk in the small apartment, next to his modest single bed. “I was studying in Petah Tikva and working various jobs. Eventually I found myself living on the streets in Jerusalem, and began to work with a social worker here named Efrat; they [the city] really helped me.”He has been living in the apartment for eight months, studying to be a sort of insurance investigator. He’s on a break today, studying hard.“I feel like a man here, with dignity,” he says. “It is a big change from living in the shelter; I feel hope and have an organized life.”He meets with social workers who encourage him to continue his education and find work that will enable him to move out on his own. He hopes to save enough money for that, and to marry.THE CONCEPT guiding municipal emergency services is to set the city’s homeless on a track toward getting off the streets, becoming sober if they have addictions, and escaping the pressures of not having money or a roof over their heads.The emergency services center on Koresh Street, not far from city hall, has several social workers and can receive those in need 24 hours a day. Located beneath a canopy of green vines, it is concealed enough to provide the privacy that the homeless may feel they require to approach social workers for help.When I arrive there on a hot Tuesday, a few men are shuffling in and out, their gazes averted; this is likely not the life they imagined, and the anonymity of not having to wait on line in public seems to help them.Inside the center, Tamar Siboni presides over a small staff. She has worked for the municipality for 22 years, dealing with social welfare, and 11 years of that has been helping those on the streets.Siboni describes two groups of those we might consider homeless: people who have become homeless temporarily, and those who have serious addiction or psychiatric issues and live on the streets.Some of the temporarily homeless may have been evicted from their homes and may hold part-time jobs; in their cases, living on the streets has been forced on them through outside circumstances.Siboni has deep empathy for those with whom she works.“They have broken all connections with their families, friends or people from their past. They don’t have someone who can come and say, ‘I will help you.’ Think about us, how we have [a dozen] people we can call and get help. But these people have no one,” she says.The city’s welfare services see themselves as a key factor in intervening and providing relief. 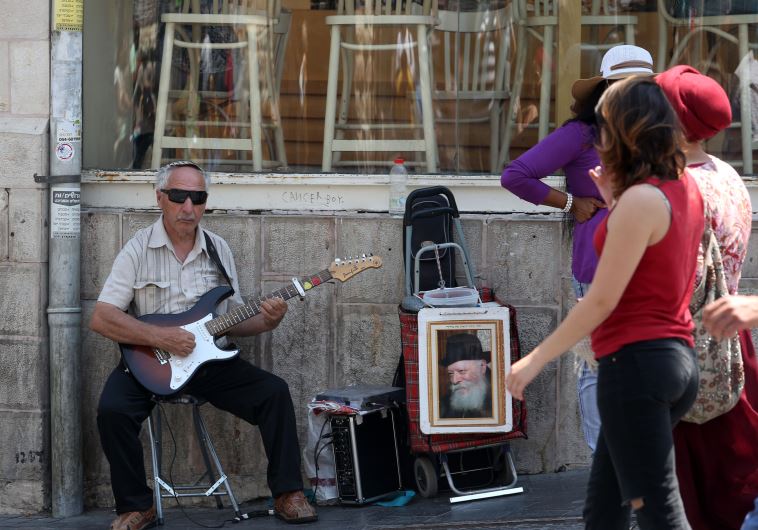 “From the moment we learn about them [homeless individuals], the country provides them with services,” says Siboni. “We build a way they can get on their feet – so they can receive support from the government such as national insurance and basic welfare, as well as clothes, food and a place to sleep. We have a shelter, and they receive breakfast and someone to advise them; they receive protection at night and security.”However, the homeless person must take the first step.“We can’t force them to come in from the streets,” she explains. “If they want to stay there, there is no law that forces them to get help.”Nevertheless, emergency service workers do go out on tours of the city to check on those who may need help.“These tours are crucial,” asserts Siboni.“We look in parks and on the streets and all the places that you and I wouldn’t sleep, but they have found to sleep. For instance, we have building sites; or in the winter they may go into buildings and sleep in stairwells or in abandoned buildings... even in synagogues or on roofs and in yeshivot. It is important to us that no one sleeps on the streets who doesn’t want to be there.”It is a complex process, and the three or four social workers on staff – as well as the five assistants, who usually serve as life coaches – have to deal with a multiplicity of problems. For example, those who are homeless may have physical disabilities, psychiatric problems, drug and alcohol addictions or debilitating health problems, such as heart conditions and diabetes that have gone untreated. A hospital might treat one or two of these problems if an ambulance found such individuals, but the hospital would then return them to the streets. The social workers try to encourage those in distress to receive as much help as they need, but since they can’t force them to receive, for instance, rehab if they don’t want it, the social workers may end up being able to assist with only one of several problems.“We often work hand in hand with them,” explains Siboni. The social workers help guide them through the complex government bureaucracy to get the aid they need. For instance, they can receive rental assistance of up to NIS 1,200 a month for four years, and the social workers may help them reestablish connections with their families.The first step is often to get them into the local homeless shelter, which is in a hotel in the city center.“There are many people for whom the shelter is the first service – from the first day to a year, which is the maximum they can be there,” she says.The shelter has 16 beds, but during the winter months it expands to 30 beds to aid those who may be in danger from the cold.Recidivism is a major problem, with some homeless making use of the services and returning to the streets. Siboni notes that it can take some people four to seven years to return to a normal, productive life after being driven to a life on the streets.For many, that success story may not even be on the horizon.Currently the Jerusalem Municipality works with 200 homeless or formerly homeless people. Of these, 80 percent are men, and 60% have addiction problems.In recent years, there has been an increase in homeless women seeking assistance. This is not because there are more homeless women, Siboni believes; rather, it shows that women are choosing to make use of the city’s services rather than allowing themselves to fall into other paths – something she views as a positive development.“We see that women usually have a way to deal with [homelessness]; they work as prostitutes, but [now] they see they can receive help without selling their bodies in exchange,” she says. “And I’m actually happy to see more women – it is better that they are in the shelter.”One striking feature of the capital’s homeless is the number of new immigrants among them, accounting for half of those on the streets. Around 10% of these immigrants are from the US, and a quarter are from the former Soviet Union.Ethiopian immigrants comprise 5%, or around 10 of those using the services.As in other countries, the average age is between 45 and 55. The number of non- Jews receiving aid from the emergency services – including Arabs, who make up one-third of the city’s population – is negligible.Another face of the homeless here is those suffering from “Jerusalem Syndrome,” continues Siboni. “It is the Holy City, and we have people from all over the world, and we have weird people who come here and want to bring the Messiah, or they [think they] are Jesus’s messenger or Moses.”Some of these stories have a kind of comic element to them. Siboni recalls one Belgian tourist in his 30s who set himself up in a tent in Talbiyeh, one of the city’s wealthiest neighborhoods. Emergency services went to ask him why he was sleeping there, and the man claimed he had come to help the IDF defend Israel.Eventually, with the help of the embassy and the man’s father, he returned to Belgium, his mission to aid the army apparently undertaken in vain. 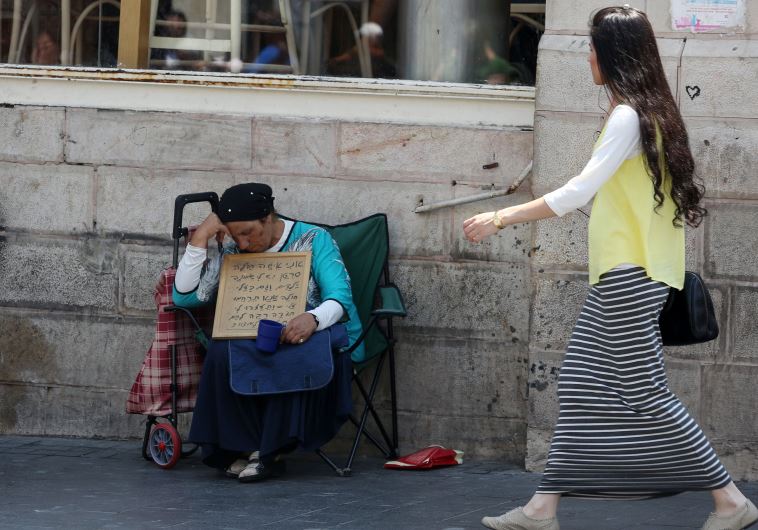