White House says Teheran has made statements based on politics, not physics.

By JPOST.COM STAFF, AP
FEBRUARY 11, 2010 08:49
Robert Gibbs
(photo credit: Associated Press)
Advertisement
The United States doesn't believe Iran is capable of enriching uranium to the degree the Islamic Republic claims, the White House said on Thursdya night.Iranian President Mahmoud Ahmadinejad said Thursday that Iran had produced its first batch of uranium enriched to a higher level than before, raising fears it may be moving closer to the ability to produce material for a nuclear weapon. White House spokesman Robert Gibbs dismissed Iran's claims, saying that country's leadership had made a series of statements based on politics, not physics.The claim of new progress in Iran's nuclear program came a day after the US Treasury Department imposed new sanctions, freezing the assets in US jurisdiction of a Revolutionary Guard general and four subsidiaries of a construction firm he runs.Related articles:
Analysis: Is Iran pre-revolutionary?
An Iranian Voice: We’re ready to pay the price
Protest at Sweden's Iranian embassy turns violent

Earlier Thursday, British Prime Minister Gordon Brown warned that Iran would face harsher sanctions if it moves forward with a nuclear weapons program.Brown's comments came as hundreds of thousands of Iranians gathered in a central Teheran square to mark the 31st anniversary of the revolution that created the Islamic republic.Speaking to reporters in Belgium, the UK prime minister said that while he would like to see dialogue with Iran, “the patience of [Western] countries is not inexhaustible”.“I think the choices could not be clearer. Iran can either pursue a civilian nuclear program, respect human rights and earn the trust and respect of the international community, or it can move ahead with its nuclear weapons program, trample on human rights and be isolated and ostracized on the wrong side of history, outside the international community," he said. 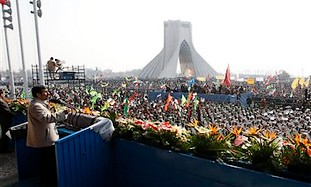 He also noted that the UK was stepping up talks with other countries about tougher sanctions on Iran. Earlier Thursday, Ahmadinejad  claimed that his country had "the capability to enrich uranium more than 20 percent or 80 percent, but we don't enrich [to this level] because we don't need it." During a speech broadcast live on state television, he said, "I want to announce with a loud voice here that the first package of 20 percent fuel was produced and provided to the scientists," referring to the recently begun process of enriching Iran's uranium stockpile to higher levels.Uranium enriched to 80 percent is considered to be on the verge of Highly Enriched Uranium (HEU) needed to produce a high quality nuclear device. Iran announced Tuesday it was beginning the process of enriching its uranium stockpile to a higher level. The international community reacted by starting the process to impose new sanctions on Iran. Ahmadinejad reiterated Iran's position that it was not seeking to build nuclear weapons."When we say we do not manufacture the bomb, we mean it, and we do not believe in manufacturing a bomb," he told the crowd. "If we wanted to manufacture a bomb, we would announce it ... our nation has the courage to explicitly say it and build it and not fear you."Throughout the day, as security forces dispersed anti-government protests in the Iranian capital, Teheran residents reported Internet speeds dropping dramatically and e-mail services such as Gmail being blocked in a common government tactic to foil opposition attempts to organize.State television showed images of thousands upon thousands carrying often identical banners marching along the city's broad avenues toward the central Azadi, or freedom square, to attend a speech by Ahmadinejad.In Azadi Square itself, massive crowds waved Iranian flags and carried pictures of Ayatollah Ruhollah Khomeini, the founder of the Islamic state, and his successor as supreme leader, Ayatollah Ali Khamenei.The opposition has vowed to stage counter demonstrations, but eyewitnesses say police have deployed hundreds of forces in central Teheran to confront them.Witnesses said that riot police fired the paint-filled balls after protesters began to chant opposition slogans in Sadeqieh Square, which is about one kilometer from the huge pro-government gathering.Witnesses say there were no apparent injuries among the several hundred protesters.Iranian authorities again tried to squeeze off text messaging and Web links in attempts to cripple protest organizers. Internet service was sharply slowed, mobile phone service widely cut and there were repeated disruptions in popular instant messaging services such as Google chat.But several Iranians reached by The Associated Press said some messenger services, including Yahoo!, and mobile phone texting were still sporadically accessible. Many Internet users said they could not log into their Gmail account, Google's e-mail service, since last week. 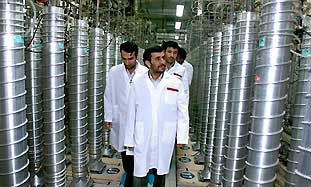 "We have heard from users in Iran that they are having trouble accessing Gmail," said Google in a statement. "We can confirm a sharp drop in traffic and we have looked at our own networks and found that they are working properly."Opposition Web sites reported that protesters have gathered in several places in Teheran to display green banners.Foreign media were only allowed to cover the ceremonies in the square and the speech by Ahmadinejad, with photographers bussed to the site and then away. There is an explicit ban on covering opposition protests.Opposition members went on roof tops late Wednesday and shouted Allah-u-Akbar ("God is greatest") in protest — echoing similar cries after the disputed June election as well as anti-shah protests more than three decades ago.Since the election that brought Ahmadinejad to power, opposition protesters have repeatedly taken to the streets.Iranian authorities are desperate to show the upper hand on the most important day of the nation's political calendar. But the high-profile events — including a huge gathering in Teheran's Azadi Square and other places across Iran — offers a chance for opposition groups to make another powerful statement of their resolve.Anti-government Web sites and blogs have called for a major turnout and urged marches to display green emblems or clothes — the color adopted by the anti-government movement since June's disputed presidential election.The opposition leaders have promised to join street rallies, including the Green movement founder and former presidential candidate Mir Hossein Mousavi.
Iranian officials, however, have warned that any protests will be immediately crushed by security forces. At least eight people were killed in clashes during the last major opposition marches in late December.In recent months, the opposition has built its street proteststrategy around days of important political or religious significancein attempts to embarrass authorities. The tone of the rallies, however,has shifted from outrage over alleged fraud in Ahmadinejad'sre-election to wider calls against the entire Islamic system, includingSupreme Leader Ayatollah Ali Khamenei.The last large-scalemarches — held to coincide with a Shi'ite holy day in late December —brought the most violent battles with security riots since shortlyafter the June 12 election.
Advertisement
Subscribe for our daily newsletter