Final count: Likud boosted to 30 seats, Meretz up to 5

Likud and Meretz gain another seat as the Joint List and UTJ regress.

By JPOST.COM STAFF
MARCH 19, 2015 10:47
Celebrations at the Likud headquarters in Tel Aviv, March 17, 2015
(photo credit: MARC ISRAEL SELLEM/THE JERUSALEM POST)
After some 200,000 additional ballots were counted from IDF soldiers, absentees, prisoners and the hospitalized between  Wednesday and Thursday night, the final count of votes in Tuesday's election shows that the Likud has risen from 29 to 30 seats and Meretz has gained another seat, totaling five mandates.United Torah Judaism dropped to six seats along with the Joint (Arab) List dropping to 13 mandates. 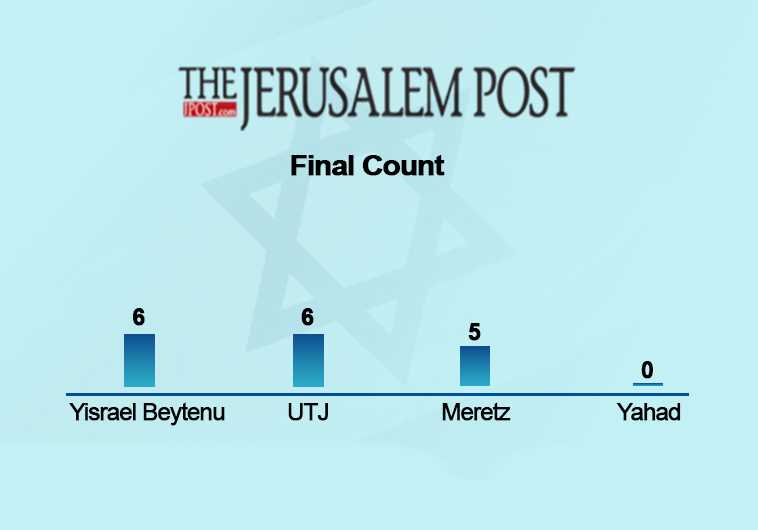 In addition, according to Israel's Central Election Committee, out of a total of 5,878,362 eligible voters 4,253,336 participated in Tuesday's election or 72.3 percent of the electorate. Furthermore, the electoral threshold for any party to participate in the next Knesset was 136,808 votes with 33,482 votes to equal one mandate.   Exit pollsters who presented a woefully inaccurate map of Tuesday’s election outcome are searching for clues as to why their results differed so vastly from the final figures.Usually exit polls – which debut precisely when the polls close at 10 p.m., and offer the first insight into what went down on Election Day – are generally far more accurate. This year, the first exit polls presaged a rough tie between the Likud and the Zionist Union, with around 27 Knesset mandates each.Steven Miller, an American Israeli pollster at 202strategies, said that the pollsters should release their methodologies, though the polling companies say it is proprietary information.“There are a lot of questions around the exit polls,” he said on Wednesday.

Niv Elis contributed to this report