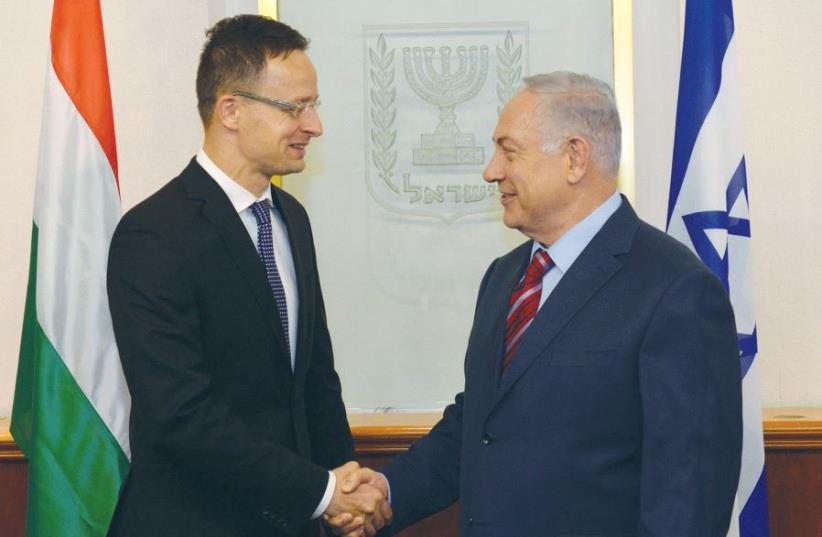 PRIME MINISTER Benjamin Netanyahu meets with Hungary’s Foreign Minister Peter Szijjarto in Jerusalem on Thursday.
(photo credit: HAIM ZACH/GPO)
Advertisement
Netanyahu is scheduled to travel to Budapest next month for a meeting with the heads of the four central European countries that make up the Visegrad group, as Israel continues to try to build relationships with various regional subgroupings around the world.Netanyahu is expected to meet with the heads of Hungary, Poland, the Czech Republic and Slovakia at the summit on July 18-19. This visit will come less than a month after Netanyahu met with the heads of Cyprus and Greece in Thessaloniki, with Israel having developed a close alliance with those EU countries. And in early May, Netanyahu went to Liberia to take part in a summit there of 15 West African states.With Jerusalem’s relationship with the European Union often strained because of the Palestinian issue and the desire of some key voices in Brussels to link development of ties to that issue, Israel has adopted a policy of forging close ties with specific countries or groupings of countries inside the EU who are more sympathetic to Israel’s position and are also interested in having close bilateral relations.
Energy ministers from Israel , Cyprus , Greece and Italy sign natural gas agreement in Tel Aviv on April 3, 2017 (REUTERS)
For instance, the energy issue has bound Israel much closer to Cyprus and Greece, and the Visegrad countries find themselves interested in forging closer ties because of economic, security and energy issues as well. These countries forums, as well as inside discussions in EU institutions in Brussels.The same dynamic is at work in Africa. With Israel having been boxed out of any formal status in the African Union, largely because of the opposition of South Africa and the Arab North African countries, it has made inroads instead with African organizations such as the Economic Community of West African States, or even ad hoc groupings, as Netanyahu did last July when he met the leaders of seven East African countries.Netanyahu’s visit to Budapest will be the first visit there of an Israeli prime minister since the country emerged from Communist rule in 1989. He is expected to hold both bilateral talks with the leaders of each of the Visegrad countries, as well as a joint meeting as well.Hungarian Foreign Minister Peter Szijjarto was in Israel in May. The V4, as the Visegrad group is known, is a political and cultural alliance aimed at facilitating the integration of the four countries in European and Euro-Atlantic structures.Szijjarto told the Hungarian news agency MTI when he was in Israel that the three most important aspects of economic cooperation with Israel were in the areas of automobile navigation, water management and energy.“The automobile industry provides the backbone of the Hungarian economy, and the future development of this sector of industry fundamentally determines the growth of the Hungarian economy,” Szijjarto highlighted.Close cooperation with Israel could make Hungary the European center for the testing and development of self-driven vehicles, he said.“Based on the buying up of certain companies, it has become clear that Israel will be one of the global centers for the development of [autonomous vehicles]. Israeli company NavNGo is one of the Hungarian government’s strategic partners, employs hundreds of GPS software engineers in Hungary and is one of the world leaders within the field of developing such software, and plays an extremely important role in making self-driven cars a reality,” he said.Audi, Opel and Suzuki exports make up a huge percentage of the country’s overall exports, and Europe’s largest engine manufacturing plant is located in the country.With regard to energy, the foreign minister – referring to Israel’s offshore operations – said: “Israel’s natural gas deposits could play a significant role in the energy security of Europe and Hungary. If extraction begins according to schedule in 2019-20, Hungary will have an interest in purchasing gas [either via a pipeline or in the form of liquefied natural gas] in view of the fact that we would like to purchase natural gas form as many sources as possible.”