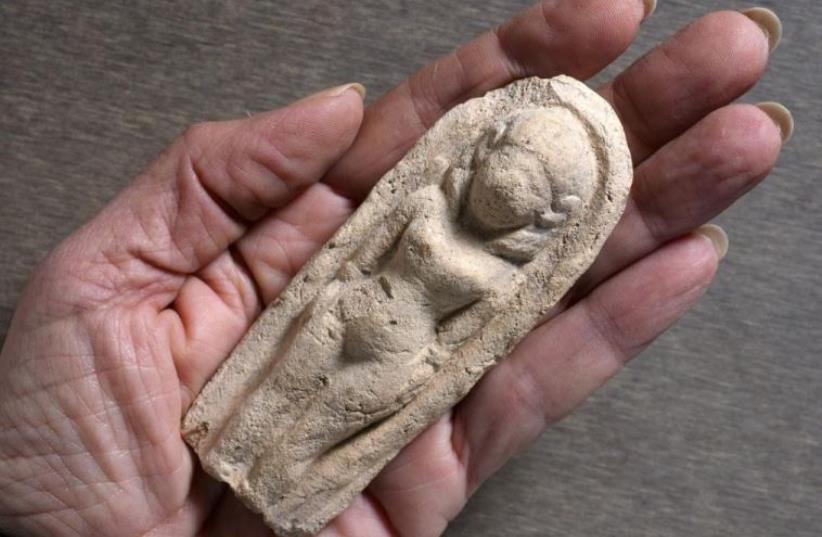 The ancient statuette found by Ori Greenhut in Tel Rehov.
(photo credit: MIKI PELEG/IAA)
Advertisement
During a trip to the Tel Rehov archeological site in northern Israel this week, seven-yearold Ori Greenhut, from Tel Te’omin in the Beit She’an Valley, suddenly came upon a small figure covered with soil while climbing the site’s tel, or archeological mound.When he rubbed the dirt off the object, an unusual clay statuette was revealed.His mother, Moriya Greenhut, said Ori was excited when he came home to present her with the mysterious ceramic figurine of a woman standing naked.“We explained to him that it was an antique, and that the Antiquities Authority preserves its findings for the general public,” she said on Thursday.In short order, the family reported the finding to the authority, and Amihai Mazar, professor emeritus at the Hebrew University and director of the archeological excavations at Tel Rehov, inspected the statuette.ORI GREENHUT holds the ancient statuette he found in Tel Rehov earlier this week. (Miki Peleg, courtesy of Israel Antiquities Authority)“It is typical of the Canaanite culture of the 15th–13th centuries BCE,” said Mazar. “Some researchers think the figure depicted here is that of a real flesh and blood woman, and others view her as the fertility goddess Astarte, known from Canaanite sources and from the Bible.“It is highly likely that the term trafim, mentioned in the Bible, indeed refers to figurines of this kind,” Mazar added. “Evidently, the figurine belonged to one of the residents of the city of Rehov, which was then ruled by the central government of the Egyptian pharaohs.”For his good deed, representatives from the IAA went to Greenhut’s Shaked Elementary School at Kibbutz Sde Eliyahu, to present him with a certificate of appreciation for good citizenship.Meanwhile, his teacher, Esther Ledell, noted that the archeologists came to the school while she was teaching her students about idol worship.“It was an amazing occasion!” she said. “The archeologists entered the class during a Torah lesson, just when we were learning about Rahel stealing her father’s household gods (trafim; Genesis 31).”Ledell continued: “I explained that the household gods were statues that were used in idol worship, and all of a sudden I realize that these very same idols are here in the classroom!”