McFerrin, as a vocalist and conductor, is renowned for his extraordinary vocal control and unique technique. 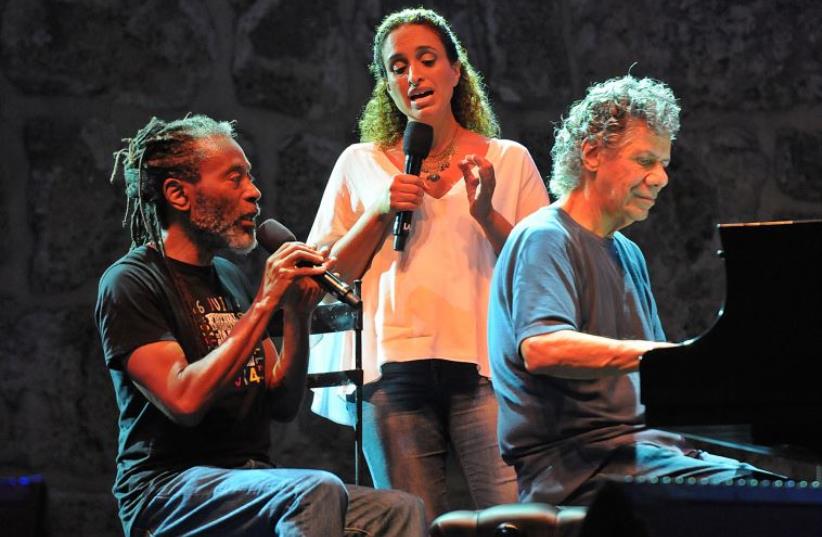 DYNAMIC JAZZ duo Bobby McFerrin (left) and Chick Corea perform with Israeli singer Achinoam Nini (center) at Zappa Shuni Amphitheater
(photo credit: YOAV ETIEL)
Advertisement
Bobby McFerrin and Chick Corea are each masters musicians in their own right. McFerrin, as a vocalist and conductor, is renowned for his extraordinary vocal control and unique technique. He is perhaps best known for his 1988 hit song “Don’t Worry, Be Happy”. Pianist Chick Corea (Armando Anthony “Chick” Corea) is one of the forefathers of the electric jazz fusion movement, and many of his compositions are considered jazz standards.However, when this American duo partners up, the sum is actually greater than the parts, and the end result can only be described as sensational. On Wednesday night at the Zappa Shuni Amphitheater, each musician shared his own expertise and talent in an incredible performance that included hits from their joint 1992 album Play and improvised scat jams.It took the packed audience two songs to warm up to the unconventional pairing and style of the two musicians, but as soon as they started playing “Autumn Leaves” the crowd became electric. During the song, Corea played the “traditional” piano portion, while McFerrin used his voice as well as the piano itself as percussion. The chemistry between the two musicians was lighthearted yet dynamic, and at points throughout the show McFerrin took a seat to watch Corea play, while at other times Corea stopped and watched McFerrin in action. Their mutual admiration made the crowd go wild, and the nearly 1,000 people in the audience were instantaneously hypnotized.After the musicians adequately showcased their individual and joint talents, they brought the audience in to the mix. By dividing the crowd by sections and into men and women, they squeezed improvised harmony out that was nothing short of magic.Just when it felt like the energy couldn’t get any more electric, the duo introduced Achinoam Nini, to perform one of Corea’s most prominent pieces “Spain.” In an evening of many highlights, this performance of three musicians at the top of their game proved to be the pinnacle.