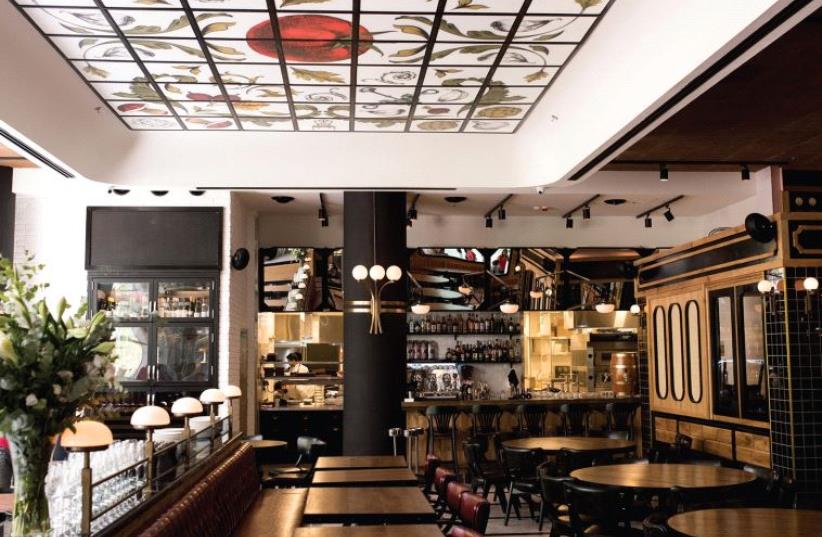 Tito restaurant
(photo credit: PR)
Advertisement
The Benedict Group, whose restaurants launched the concept of breakfast served 24/7, is breaking new ground again with its opening of Tito, an Italian restaurant inspired by the familystyle restaurants made popular by Italian immigrants to the US. The idea is that tables of diners order large dishes meant to be shared by two to eight people, much like families do in their homes.Even the cocktails at Tito are meant to be shared – by three persons – although they may be ordered individually as well (NIS 48/ NIS 120). There are only a couple of specialty cocktails. The Collins – gin, tonic, lemon and anise – was shaken and poured tableside into tumblers containing, surprisingly, gummy candies (some glasses got more anise than others); the Ketel Passion, meanwhile, was a blend of Campari, citrus vodka, lemon, orange and passion fruit, garnished with mint.The latter packed a bit more of a punch, but both were refreshing.The categories on the English/ Hebrew menu are starters, salads, pizzas and – primarily – pasta, with one meat and one chicken main course, as well as three fish/seafood dishes. The pasta is made fresh daily from Italian flour and egg yolks, although egg-free and gluten-free pastas are available upon request.The starter recommended by our waitress was the testa Parmigiana (NIS 62), a head of cauliflower coated in breadcrumbs and Parmesan cheese, served with a truffle-bechamel sauce. What arrived at our table was the largest head of cauliflower I’ve ever seen outside a shuk, in the most beautiful shade of crisp golden brown, topped with a light sprinkling of white cheese. The vegetable itself was soft and tender, with just the right amount of crunch provided by the crust, all enhanced nicely by the rich sauce.Our second appetizer was the Caprese salad (NIS 60) – tomato slices in olive oil and Atlantic sea salt, with basil leaves and balls of fresh mozzarella, all drizzled lightly with reduced balsamic vinegar. The creamy mozzarella was superb, and the Caprese salad as good as any I have had in recent memory.There are three pizzette (NIS 74) on the menu, only one of which (the mushroom) is vegetarian, although it is possible to order the artichoke without the smoked goose breast. It was supposed to come with tomato sauce but instead was a pizza bianca (white), with a Parmesan-bechamel sauce. Still, there was nothing to complain about. The excellent crust – a flatbread focaccia – was thin and chewy, while the toppings of artichokes, olives and cherry tomatoes were a harmonious combination.For our pasta course we chose the pappardelle con funghi (NIS 112), a huge platter of broad, flat ribbons of pasta, generously studded with large morsels of portobello and champignon mushrooms, topped with large dollops of crême fraîche that melted into the sauce of porcini stock seasoned with thyme.Unfortunately, the advertised pine nuts were nowhere in evidence, and the cream did little to thicken the sauce. Nevertheless, the dish was hearty and filling; and even though we were a party of four, there was plenty left over.The shrimp main course (NIS 107) featured small peeled shrimps baked with breadcrumbs and Parmesan cheese, served in a cream and garlic sauce. The shrimps themselves were unremarkable, but the sauce was extraordinary.The wine list begins and ends with two house wines, one white and one red, both imported from Italy. The good news is that they are both quite pleasant, at the reasonable price of NIS 25 per glass.No matter how many people are at the table, it is unlikely they will order more than one dessert, since they come only as whole cakes, pies or trays that would serve six to eight people. The desserts (NIS 120), like the theme of the restaurant itself, have origins that are as much American as Italian, so we took the opportunity to order one that is rarely found on menus in Israel: red velvet cake. The version here – with as much icing and cream filling as red cake – was consequently very sweet but still a nice novelty.Tito is obviously used to packing up lots of leftovers. At the end of the meal, we were brought a shopping bag larger than you would see in most department stores. Except there was only one take-away container at the bottom of it. This came as a surprise, as we had asked for the remains of four dishes to be wrapped up. It pays to be very specific when explaining exactly what you want to take home.By its nature and location Tito is not the kind of restaurant conducive to offering business lunches. If you do go before dinner, however (weekdays, noon to 5 p.m.), your bill is subject to a 15% discount.The writer was a guest of the restaurant.Tito
Not kosher
Azrieli Mall
53 Derech Yitzhak Rabin, Givatayim
Tel: (03) 631-7080