Elegance abounds at Aubergine, where health is on the menu. 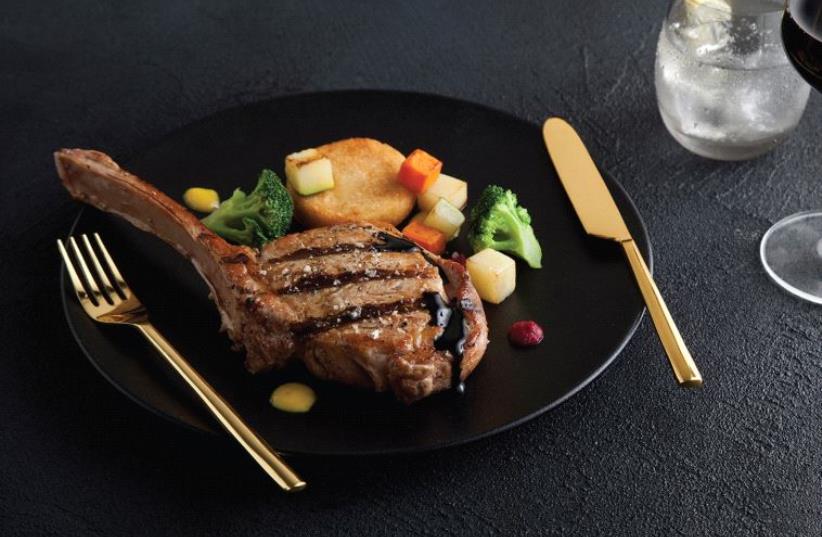 Aubergine
(photo credit: PR)
Advertisement
Walking into the thickly carpeted and uncannily quiet Aubergine restaurant in the David InterContinental Hotel in Tel Aviv, I had the feeling I was entering an elegant English lounge of the 1920s – something straight out of the TV series The Forsyte Saga (remember that?).The genteel ambience was enhanced by soft-spoken waiters in tuxedos, flowers on every table and polished wooden furnishings.The china was white and goldedged and made by the Churchill company, although the speckled finish did look as though a few days’ dust had settled on the porcelain surface. Fortunately, this turned out to be an optical illusion.We sat down at a window table, and almost instantly a basket of wonderfully crispy fresh bread appeared with two dips – garlic and dill and a creamy concoction which turned out to be mashed potato, a commendably original idea.We were visited by the souschef, who welcomed us, as the chef, Alon Hirschenstein, was busy elsewhere and assured him that we would eat anything he wanted to bring to the table.The menu has a name – Health and Harmony – and the aim of the restaurant is to serve the freshest food with basic organic ingredients. There were seven starters and seven main courses to choose from, with a separate dessert menu.We told our waiter we would leave the choices to the sous-chef, as we eat anything, and several different dishes were set down in front of us. The first consisted of pieces of fresh raw salmon marinated in soy and pickled ginger with avocado, radish and cucumber cream (NIS 35). The flavor was a little bland, although the avocado was sufficiently lemony to add a kick to the dish.The second hors d’oeuvre, Belgian endive, had more body. The leaves, which were not as bitter as they can be, came with arugula (my favorite leaf), dates, roasted walnuts and something called salted almond cheese, which purported to be a kind of parve feta and was delicious (NIS 42).The almond “cheese” appeared again in the baby beets dish – tiny cooked beetroots with scrumptious polenta croutons.This dish paired well with the quinoa salad which featured cranberries and chopped herbs.Next to appear was cured amberjack with garden salad. This fish was new to me, but I would definitely have it again. It came in small slivers, highly seasoned, as part of a julienned salad of cucumbers, kohlrabi, carrots and peppers (NIS 67).Moving on to main courses, we tasted the sea bass (levrak), ovenbaked in a herb marinade and served with steamed fresh broccoli; and corvina, another sea fish with a firmer flesh, which came with homemade tehina mixed with pickled lemon (NIS 130). For fish lovers, they are both impeccable choices.The main course consisted of a massive veal chop in a reduced wine marinade (NIS 185). This was superb, crispy yet tender, succulent and full of flavor. The potato pancake on the side was made with mashed potatoes. The dish also had sautéed vegetables – broccoli, sweet potatoes and mushrooms. Highly recommended.The dessert choices were three kinds of sorbet (NIS 35); chocolate cream with “drunken” cherries (NIS 35); and tarte Tatin made from almond pastry and pears (NIS 35). We tried the last two and can pronounce them perfect. The chocolate was rich and dark, the raspberry sauce piquant, and the almond pastry light and crunchy.With our meal we drank a halfbottle of 2012 Gamla Cabernet Sauvignon from Yekev Ramat Hagolan. As befits a four-year-old wine, it was rich, full-bodied and fruity (NIS 150).The bathrooms in the hotel are a little far from the restaurant, but upon reflection it’s probably a good thing – at least one can walk off some of the calories of a rich and satisfying meal.The writer was a guest of the restaurant.Aubergine
Kosher
David InterContinental Hotel
12 Kaufmann Street, Tel Aviv
Tel: (03) 795-1255
Sunday to Thursday, 6 p.m. to 10:30 p.m.