Dining: New Buffalo on the block

Dishes such as tacos, burritos and chili con carne, spiced with tangy sauces such as salsa, pico de gallo and fajita vegetables, come hot out of the kitchen, presented street style. 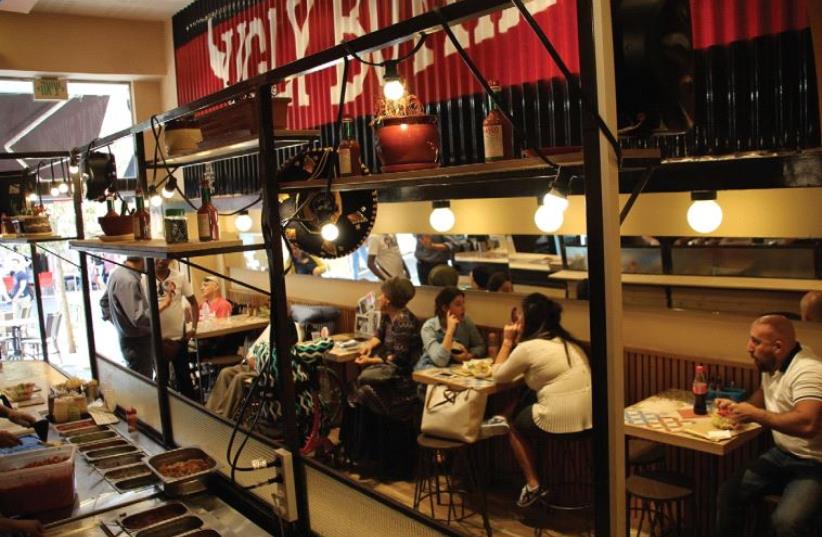 Ugly Buffalo restaurant
(photo credit: PR)
Advertisement
Amid the myriad of diverse restaurants and cafes that line Jerusalem’s major downtown thoroughfare, the Mexican eatery Ugly Buffalo recently opened on Jaffa Road. Serving up a heaping helping of flavorful fare, the kosher meat restaurant offers patrons a taste of authentic Mexican street food.Dishes such as tacos, burritos and chili con carne, spiced with tangy sauces such as salsa, pico de gallo and fajita vegetables, come hot out of the kitchen, presented street style on paper plates and plastic bowls. If those terms sound totally foreign, all the ingredients are clearly described on Ugly Buffalo’s comprehensive English/ Hebrew menu.After ordering their selections at the counter, customers can have their meal at a table inside the restaurant or sit at a table right outside and enjoy their street food…on the street.And so, amid the intermittent gentle clanging of the light rail and the general din of neighboring diners and passers-by, my dining companion and I sat down to lunch at Ugly Buffalo. We started with a plate of crisp[y nachos (corn chips), which came with small containers of guacamole and tomato salsa (NIS 15). I also ordered a side dish of chili con carne (chopped beef with kidney beans in a spicy sauce). A great start.Next up, I ordered the hearty chili con carne burrito. A soft whole wheat tortilla wrap filled with chili con carne, it included (as the menu explains) rice, beans, fajita vegetables (caramelized onions and sweet peppers), pico de gallo (tomatoes, onions and cilantro), guacamole and tomato salsa. It was delicious – spicy (not too), flavorful (very) and so satisfying.The burritos are offered in a choice of main fillings. Besides the chili con carne, there’s grilled ground beef, braised beef, chicken nuggets, marinated chicken breast or Portobello mushrooms, each of which is stuffed with the other ingredients listed above. Depending on one’s appetite, one can order a regular size burrito (NIS 25), a large (NIS 35) or a grande (NIS 45).A note of caution: As the burritos are filled to capacity with these luscious ingredients, one is well advised to take a handful of napkins to the table before sinking one’s teeth in.My dining companion had a crispy combo of a chicken and a mushroom taco (NIS 35), which she enjoyed immensely.For dessert, I was eager to try the churros (NIS 20). I was familiar with the deep-fried delights from the time I had sent in Spain many years ago, where we would dunk the elongated crullers into a cup of hot chocolate. At Ugly Buffalo they looked a little different but were just as delicious.The order of churros comprised five light, crescent-shaped doughnuts dusted with sugar and cinnamon, accompanied by chocolate sauce and maple syrup in which to dip them.Yum! Other items on the menu include rice dishes (NIS 35) and fresh garden salads (NIS 35), each mixed with a choice of beef, chicken or mushrooms.The Mexican dishes are very flavorful but not overly picante for the average palate. For those who like their food hot, hot, hot, there is an array of sauces available with which to up the ante, such as Tabasco, mango habanero, salsa roja, sweet chili and Israeli capsicum (shata).There is also a children’s meal (NIS 30), as well as more familiar fare such as chicken wings (NIS 25), shnitzel (NIS 20) and fries (NIS 15).At Ugly Buffalo, while the focus is on authentic Mexican flavors, the accent is on good health. The salads and vegetable sauces are made daily with the freshest ingredients, and the rice, tacos and burritos come in a choice of white or whole grain, and there are vegan and gluten-free options as well.“I want to serve the kind of food that I would give to my children,” says owner Mati Wagner, the father of eight.Born in San Diego, California, Wagner had a lot of exposure to Mexican food. He went to elementary school in Santa Monica, where many of his classmates were Mexican, so he had an early introduction to the Latino culture and cuisine.“I love Mexican food. It’s simple, fresh, healthful food, and I want to share with Israelis my wonderful experience of growing up in southern California. I want to show that fast food can be healthy. It’s my gift to Israel,” he says.Muchas gracias, Mati! The writer was a guest of the restaurant.Ugly Buffalo Kosher
34 Jaffa Road, Jerusalem
Tel: (02) 628-2260
Sunday to Thursday, 11 a.m. to 11 p.m.
Friday, 11 a.m. to 1 p.m.