Dining: Straight out of a movie 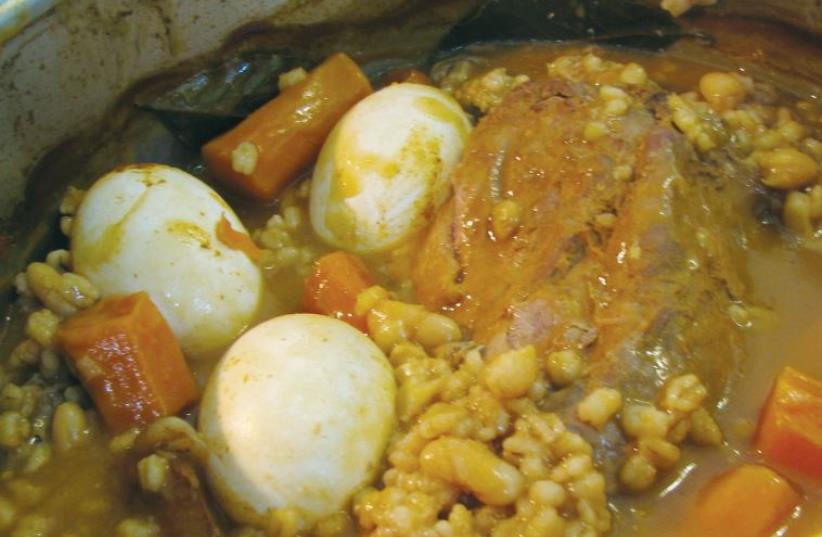 The German-Jewish poet Heinrich Heine (1797-1856) called the cholent dish ‘a ray of light immortal'
(photo credit: Wikimedia Commons)
Advertisement
Looking at the photographs of Shteisel that I have snapped surreptitiously, I am reminded of scenes from Yiddish theater, from movies and from television. The photographs could just as easily have been taken on the sets of Tuvya the Dairyman or the extraordinarily popular Israeli TV series Shteisel.In fact, it was from the Shteisel restaurant in Jerusalem’s Geula neighborhood that the series got its name.This is not a fancy shmancy eatery, though it does have black tablecloths on the rectangular and square tables, which collectively can seat 24 people. It’s actually a delicum- restaurant, kosher mehadrin, with a clientele that goes with the territory.It’s also a what you see is what you get restaurant, where everything that’s available on any given day is displayed behind a glass counter: meat dishes on one side, fish and vegetarian dishes on the other. There is no menu and everything is very reasonably priced. Customers simply look at the display behind the glass window and make their choices.Sometimes they will ask if something is spicy or whether the gefilte fish is sweet, but more often than not they choose several items which they either eat in the restaurant or take home.Whoever has grown up on homecooked Eastern European cuisine will love Shteisel. There’s klops and cabbage rolls and blintzes, several chicken dishes, a couple of beef dishes, three or four choices of fish plus a variety of hot and cold salads, kugels and latkes. It’s all there for customers to feast their eyes on before they feed their faces. There are also soups that are kept in covered cauldrons. On Thursday nights, cholent and kishke are also available. Although conventional wisdom has it that cholent does not taste the same on a weekday as it does on Shabbat, Shteisel’s cholent must taste heavenly on Shabbat if the Thursday sample is anything to go by.The clientele are straight out of the television series: bewigged and bescarfed women, and men in black suits with long black coats and corkscrew peyot bobbing past their shoulders – only theirs are real.I’ve taken a corner table from where I can see everything that’s going on and can pick up snippets of conversation. Two men are discussing job options. A thin hassid with a healthy appetite is studying Talmud as he eats. A father cuts up the meat on the plate of his young son. The two older children are capable of fending for themselves.One has a plate of salmon plus side dishes. The bill for all four comes to NIS 154, including a large bottle of soft drink.I’m a salmon addict, and on this night they have two kinds. I order both with potato puree and coleslaw. One helping of salmon comes in a slightly spicy sauce, the other is succulent and just a tiny bit sweet, suggesting that the culinary roots of the cook are in Poland or Hungary. There’s enough puree on my plate for three people. The coleslaw helping is also quite generous, sweet, the way I like it, and not drowning in mayonnaise as is the case in most Israeli restaurants, although it still could have done with a little less mayonnaise. The bill comes to NIS 61, which is more than another waiter had charged me for an identical meal plus a piece of fried sole on a previous visit, but it is still a lot less than what a similar meal would have cost elsewhere. As I am paying, I catch sight of the very large vegetarian blintzes. I order two to take home, which add NIS 20 to my bill – money that is definitely well spent.Shteisel has branches in Jerusalem, Bnei Brak and Ashdod and also runs a catering service.Shteisel
Kosher Mehadrin
7 Nahum Street, Jerusalem
Tel: (02) 538-4447; 053-310-0001