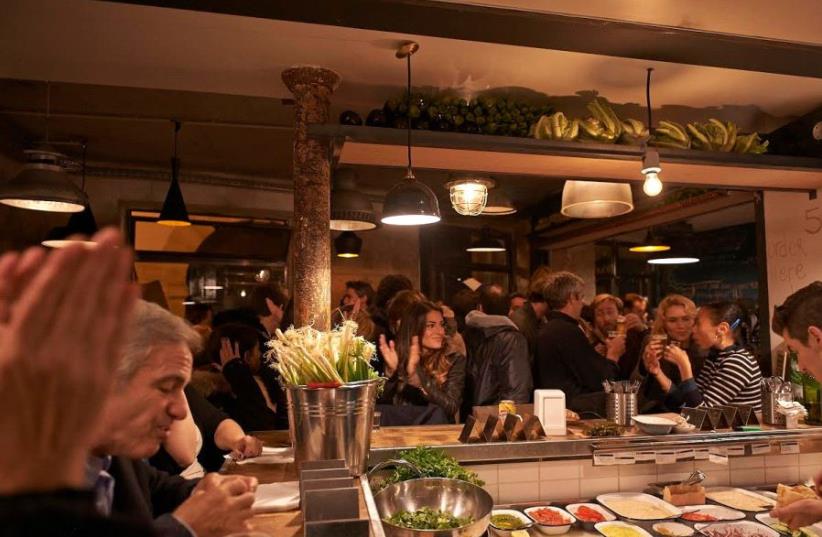 The Paris branch of Hamiznon restaurant
(photo credit: Courtesy)
Advertisement
Israeli chef Eyal Shani will be expanding his ever-growing restaurant empire to two new continents by the end of the year.Shani, who is best known in Israel for being a long-time judge on the hit show Master- Chef, is set to open branches of his popular chain Hamiznon in New York City and Melbourne.“New York has been the aspiration for a long time,” Moshe Pines, the director of the Miznon group, told The Jerusalem Post on Tuesday. “To arrive there, to Manhattan, to New York, to America... it’s where things happen and it’s where we want to go with our unique concept – it’s a very natural choice.”The Manhattan location, which is slated to open sometime in October or November, will be located in the bustling downtown food court of Chelsea Market.The original branch of Hamiznon opened in Tel Aviv in 2011, and was followed by two more, also in Tel Aviv. Then Shani opened a kosher version in Paris, followed by another location in Vienna last year.And next up is Melbourne, where the sixth branch is set to open in mid-August, said Pines.“We’re jumping across the ocean this year for the first time,” he said. “One of our partners in New York lives in Melbourne and he suggested we go there... food like Eyal Shani’s that has a lot of vegetables and is vegetarian – and vegan-friendly is something that is very connected to the agenda of Melbourne cuisine over the past few years.”Unlike the Paris branch, Pines said, neither of the new locations will be kosher.But he said Shani is strongly considering the possibility of opening a kosher branch in New York.Regardless, the new outposts will stick to the roots of the original concept. The critically acclaimed eateries are known for serving up a variety of dishes – both vegetarian and meat – all stuffed inside of a pita. The chains also offer Shani’s signature dish, a whole-roasted cauliflower.“The concept of Hamiznon will remain the same,” said Pines. “Every time Eyal Shani opens in a new place he looks for some adaptation to connect to the place, the community, the colors and the city,” he added. “But the basis of Hamiznon, the atmosphere and the magic-making and of course the food – the Israeli cuisine – will remain the same.”