Rafael-produced system will enable troop transporter to move across battlefields rife with anti-tank and RPG threats. 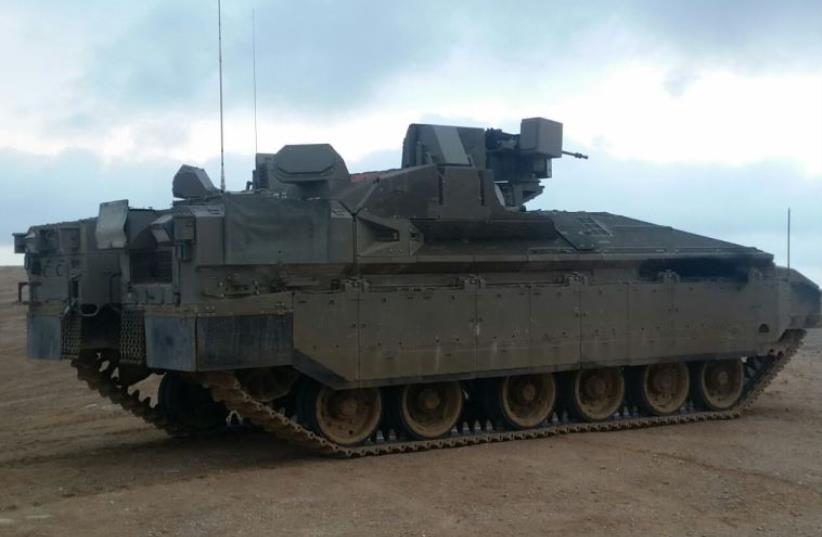 Rafael-produced Namer armored personnel carrier with Trophy anti-missile system
(photo credit: DEFENSE MINISTRY/MERKAVA TANK ADMINISTRATION)
Advertisement
The Defense Ministry unveiled on Thursday the first Namer armored personnel carrier equipped with the Trophy HV active protection system.Trophy – made by Rafael Advanced Defense Systems – has already been installed on Merkava MK 4 tanks, protecting them from antitank and rocket- propelled grenade attacks during the 2014 Gaza conflict.Now the system will be installed on every new Namer, the Defense Ministry’s Merkava Tank Administration announced, following the completion of the first operational drill involving IDF personnel at the Armored Corps School in southern Israel. The trial was held by Defense Ministry engineers and IDF ground forces, and came following a series of live-fire tests in which missiles were fired at the Namer and destroyed by Trophy.The Trophy-equipped Namers will be able to enter battlegrounds rife with antitank and RPG threats and safely transport infantry, even in the face of multiple, simultaneous threats.The Trophy system uses radar panels to detect and follow threats before destroying them in mid-air with interceptors.“We will implement the Defense Ministry’s policy of equipping every Namer coming off the production line with the only active protection system in the world,” said Brig.-Gen. Baruch Matzliah, the head of the Merkava Tank Administration.“The Namer with the Trophy system will form the highest level of protection for IDF soldiers and provide them with defense and a significant advantage on the battlefield.”During Operation Protective Edge, the Namer APC was used to save the lives of many soldiers who were protected by its reinforced armored structure.Last year, the Defense Ministry doubled its orders for parts for both Namer and Merkava MK 4 tanks ahead of an expected rise in orders for them. Some 200 factories produce parts for the Merkava and Namer across Israel, most of them located in peripheral areas, employing around 10,000 people.