Haredi protesters riot for third night in a row, 31 arrested 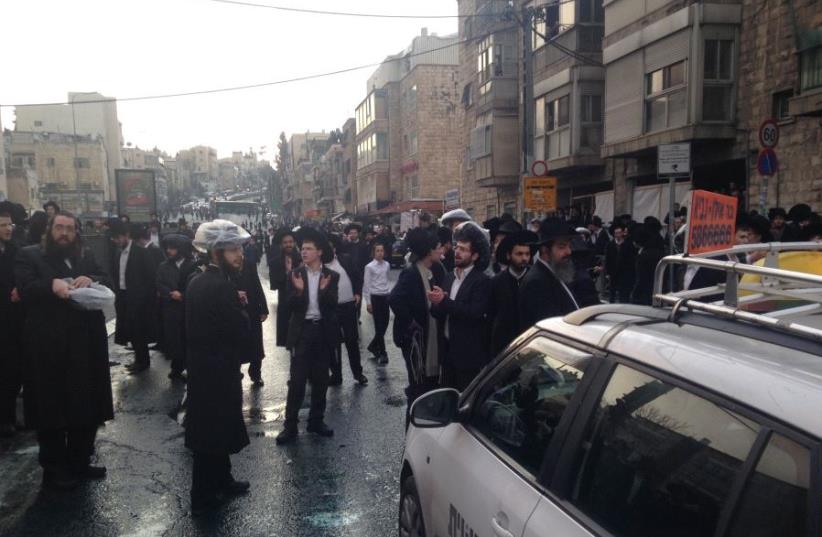 Haredi protest in Jerusalem
(photo credit: JEREMY SHARON)
Advertisement
For a third night in a row, hundreds of extremist haredi men took to major roads, thoroughfares and highways around the country on Thursday afternoon, blocking traffic to protest the arrest of a yeshiva student by the Military Police for failing to appear at IDF draft offices to begin his service.Protests took place beginning at 3:30 p.m. in Jerusalem, Bnei Brak, the Shilat junction near Modi’in, Elad, Kanut junction near Gedera, Beit Shemesh and other locales, during which 31 protesters were arrested by police for disturbing the peace.In Jerusalem, hundreds of protesters blocked the Bar-Ilan and Shmuel Hanavi in intersection, a major traffic artery, causing significant traffic jams.Police used a water cannon and mounted officers to disperse the protesters, but shortly after each attempt to clear the junction, the protesters would return and resume blocking traffic.

Police intermittently approached the crowds of protesters to drag one of the men away, and their actions were met with shouts of “Nazis” to men and “shiksas,” meaningnon-Jews, to women.At other times, protesters danced in the middle of the road, even while being blasted by the water cannons, and sang songs about their devotion to God and the Torah.According to the police, some 200 protesters arrived at Shilat junction by bus, where they attempted to stop traffic, and Route 1 was temporarily blocked due to the protests as well.The protesters were directed by organizers to the various sites by an automated telephone line and messaging services, and instructions were updated throughout the course of the protests.

Haredi protesters blocking Bar Ilan street, getting soaked by water cannon, dispersed by mounted police, then coming back 4 another round pic.twitter.com/x71Ta6m6DT

The protests are being organized and led by a group known as the Jerusalem Faction, a breakaway from the mainstream haredi (ultra-Orthodox) political grouping that has taken a more radical stance on the issue of military service.According to researchers at the Israel Democracy Institute, the Jerusalem Faction constitutes approximately 10% of the Ashkenazi haredi community and 6.5% of the overall haredi community, including the Sephardi haredim.The Jerusalem Faction tells its yeshiva students to not even report for preliminary processing at IDF draft offices when instructed to do so, resulting in the occasional arrest by the Military Police for desertion.Yeshiva students associated with the mainstream haredi community do present themselves to the IDF draft office for preliminary processing, after which they are given an exemption, unless they volunteer to serve in the army.Many of the protesters at the Jerusalem demonstration repeated similar messages when asked about the reasons they do not even report to the office.One protester, who declined to give his name, said that once a yeshiva student reports to the IDF enlistment office he is already in the system and risks being drafted against his will. He also said that efforts are made at draft offices to convince yeshiva students to sign up, and that for these reasons it is best not to even present oneself.He added that the current law for haredi service in the IDF includes quotas for how many men must enlist, and that should the quotas not be met, all haredi men of military age would be drafted.Presenting oneself at the draft office makes it easier for the IDF to recruit you, he continued. “The army, according to Ben-Gurion, was meant to be the Israel’s melting pot. The purpose was to make everyone Israeli, to [make them] lose their own identity,” he said.“We have our own specific identity, and we only want to be haredi and not anything else.”While it is true that such quotas exist, they are a relic from the 2014 conscription law that was gutted by the current government and will not be enforced. As part of its coalition agreement with the Likud party, United Torah Judaism demanded that the 2014 law be reformed so as to annul the clauses requiring compulsory haredi enlistment.The solution reached was to allow the defense minister to exempt any haredi yeshiva student from military service if the quotas are not met.