Haredi paratrooper company to be launched

Maximum of 80 soldiers to join Paratroopers Brigade’s company in November. 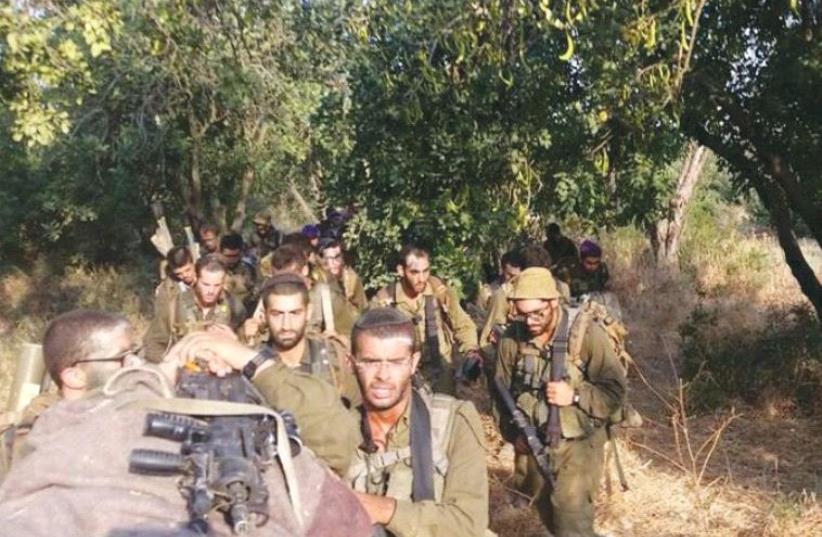 FIGHTERS FROM THE Tomer Company in the Givati Brigade perform training exercises last week.
(photo credit: TOMER – HAREDI FIGHTERS OF GIVATI FACEBOOK PAGE)
Advertisement
A company of haredi soldiers is currently being established within the Paratroop Brigade, and will soon join the Tomer Company in the Givati Brigade and the Netzah Yehuda Battalion in the Kfir Brigade as the latest combat unit of haredi soldiers.The recruitment drive is being conducted now. A maximum of 80 soldiers will be recruited to the company by the enlistment date this November, although since this is the first recruitment, the total will likely be slightly less than this figure.There are currently some 250 haredi soldiers in various stages of service with the Tomer company, including at least 100 soldiers on operational duty in the Samaria region.The IDF and the haredi Shahar organization behind the initiative seek to attract recruits from the haredi mainstream with a high level of religious observance who wish “to strengthen their haredi identity.”One of the key concerns with haredi recruitment to the various IDF tracks for haredi soldiers has been that a greater number of such recruits have come from the margins of the haredi community, and not from families and institutions that are accepted as being in the mainstream.Proponents of haredi enlistment have voiced concerns that if recruitment draws only from the margins of haredi society, haredi enlistment to the IDF will not become a widely accepted option with the majority of the haredi community.Deputy Defense Minister and Bayit Yehudi MK Eli Ben-Dahan visiting the Givati Brigade's Tomer Company in the ShomronThe Tomer company and the new paratroop company are designed specifically to address this concern and attract men from the haredi mainstream.Toward this end, a preliminary sign-up form available on a Facebook page for the new paratroop company tells potential recruits that “if you’ve left yeshiva, and you are haredi and a quality individual with a high spiritual level,” then the new combat unit might be the right next step.Potential recruits are assured that during their service their company will be accompanied by rabbis to provide the necessary religious services and support, that they will be able to eat mehadrin kosher food, will be able to pray with a quorum, and will be given time for religious study as well.The total length of service is 32 months – two years of military service and another eight months afterward for undertaking various study courses, including high-school matriculation courses, vocational training and similar options.The recruitment drive is being carried out through several methods, including coordinators actively seeking haredi men who have left yeshiva but are unsure what to do next in life.Coordination and help with recruitment is also sought through the youth departments of various municipal authorities, including in haredi-majority towns and cities, to identify potential recruits, as well as with municipal departments for truancy.Advertising via social media and haredi websites is also being conducted to increase awareness about the program.A Facebook page called Haredi Fighters of the Paratroopers has also been established to draw attention to the new company and to attract possible recruits.Acceptance to the unit is dependent on passing a physical aptitude test, although Shahar and the IDF will be instituting workshops to develop physical fitness for potential recruits before the actual test.Deputy Defense Minister Eli Ben-Dahan, who has been involved in efforts to enlist haredi soldiers as well as measures to prevent incitement against them, strongly welcomed the establishment of the company.“There is no doubt that this is another positive step upward for military service by members of the haredi community,” said Ben-Dahan.“Their entry to the Paratroop Brigade, one of the most prestigious divisions in the IDF, is another milestone for haredi integration into the army.”