"Italy is Israel’s most important European partner in the field of science." 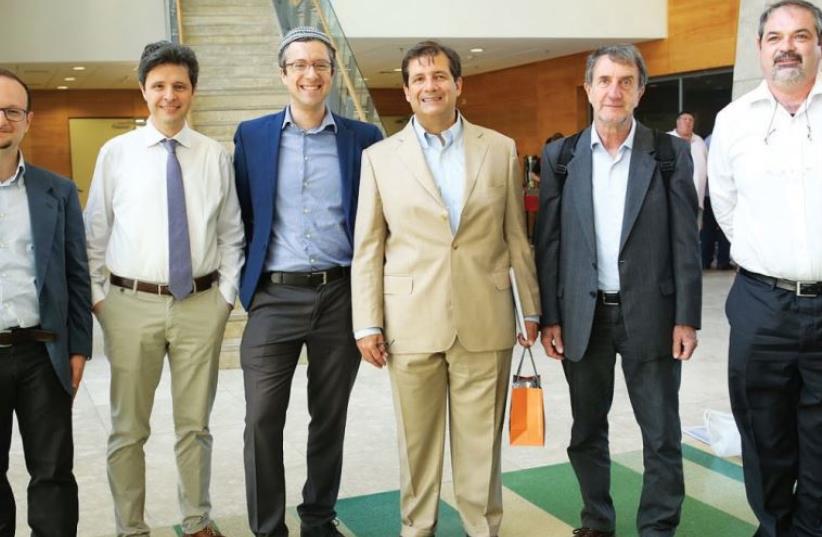 THE ITALIAN delegation poses for a photo with Italian Ambassador to Israel Francesco M. Talo (third from right) at the conference in Bar-Ilan University this week.
(photo credit: YONI REIF)
Advertisement
Italian Ambassador to Israel Francesco M. Talò expressed opposition to academic boycotts against Israel and called for the strengthening of scientific cooperation between the two countries, in an address to a conference of senior Italian and Israeli physicists at Bar-Ilan University this week.“Our prime minister said in the Knesset that whoever boycotts Israel boycotts himself,” said Ambassador Talò.“It is important for our people and for science to create opportunities for collaboration.There are good opportunities here and I want to pursue them.This is the nature of universities and research centers all over the world which should be interdisciplinary and international.In Israel and in Italy there is a strong basis for theoretical physics and we can make a difference together,” he said.The ambassador also reiterated his country’s steadfast support for Israel when it became a full member of CERN, the European Organization for Nuclear Research in Switzerland.Prior to addressing the opening of the conference the Italian ambassador met with Bar- Ilan University rector Prof. Miriam Faust and vice president for research Prof. Arie Zaban.They discussed the strengthening of ties between the university and the Italian Embassy.His remarks followed a call by some 168 Italian academics from seven Italian universities who signed a petition calling for an academic boycott of Israeli research institutions.Prof. Alessandro Silva, who delivered the opening lecture of the conference, told The Jerusalem Post that he believes academic boycotts serve as a “meaningless action.”“These calls to boycott Israel academically come out every once in a while and they end up amounting to nothing, because it is pretty clear that science is international,” he said.Silva, who is currently a professor of physics at the International School for Advanced Studies in Trieste, previously spent nearly five years in Israel completing his PhD at the Weizmann Institute of Science in Rehovot.“I spent five years in this country and two of my kids were born here, so for me this enterprise of establishing good collaborations between Israel and Italy is very important,” he said.“Most of the colleagues that I know are happy to collaborate with Israeli universities and this is good because our two countries have similar strengths in science and technology and can lead to mutual cooperation for both,” he added.Silva said that the director of his institution had already visited Israel with a delegation, and that there are plans for another visit in the coming months.“Avenues for collaboration are open, active and will continue to be so,” he said.Dr. Emanuele Dalla Torre of Bar-Ilan University, who organized the conference, said the collaboration with his Italian colleagues is also personally important for him.“I was born and raised in Italy. My family has lived there for hundreds of years. They benefited from, and contributed to, the cultural and economic wealth of the country. Now that I am in Israel, I am happy to continue to cooperate with Italy.” he said.The physicists convened for the Italy-Israel meeting on non-equilibrium physics, a three-day event co-sponsored by Bar-Ilan University and the Italian Embassy in Israel, that will explore new discoveries in quantum physics.The Italian physicists hail from leading research institutions, such as Scuola Normale Superiore of Pisa, the International Center for Theoretical Physics of Trieste, and the National Research Council of Rome.“The Israel boycott initiative does not represent the official position of the Italian government or the Italian scientific community,” said Prof. Stefano Boccaletti, scientific attaché at the Italian Embassy of Israel – a professor of physics and an honorary professor of Bar-Ilan University – prior to the conference.“This is a private initiative of a professor who seeks to sabotage fruitful cooperation between Italy and Israel. Not even one engineer is among the signatories of the petition! The opposite is true. The Italian Embassy organizes 12 conferences in Israel every year, and brings 150 researchers to Israel annually who are interested in strengthening cooperation with their Israeli colleagues,” he added.He noted that in advance of Italy Republic Day, on June 2, a member of the Italian National Rectors Council will visit Israel with the Italian Minister of Science Education to sign cooperation agreements with every university in Israel.“In fact, Italy is Israel’s most important European partner in the field of science,” the professor concluded.