Despite claims, police say no connection to Islamic State. 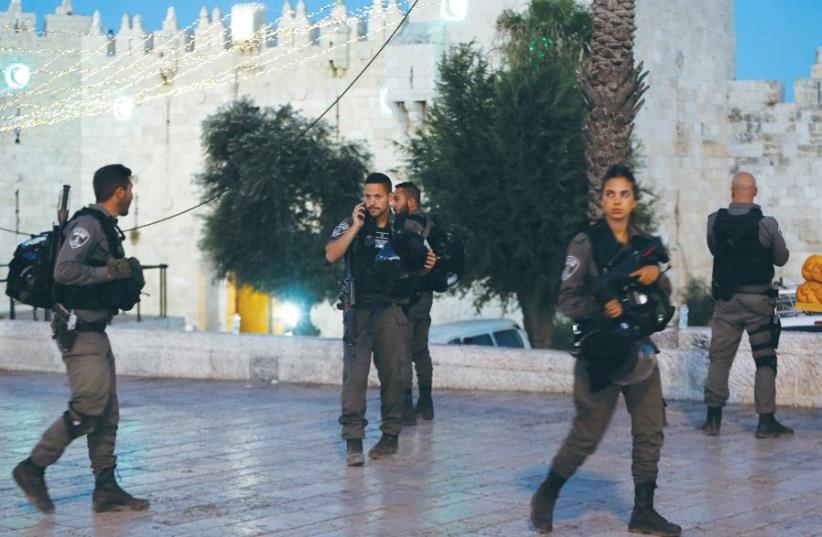 Boder Police officers secure the area around Jerusalem’s Damascus Gate after the terrorist attack on Friday evening, which killed St.-Sgt.-Maj. Hadas Malka
(photo credit: AMMAR AWAD / REUTERS)
Advertisement
St.-Sgt.-Maj. Hadas Malka, 23, was stabbed to death Friday evening, and two other officers were moderately and lightly wounded, during coordinated attacks near Jerusalem’s Damascus Gate carried out by three Palestinian terrorists armed with an improvised automatic weapon and knives.All three assailants, from the West Bank, were shot dead by responding officers.Islamic State claimed responsibility for the attack, adding that “it will not be the last” in a statement posted by Amaq, the terrorist organization’s news agency. The SITE intelligence monitoring group said it was the first time Islamic State had claimed responsibility for an attack inside Israeli-controlled territory.However, police spokesman Micky Rosenfeld said ISIS’s claims of responsibility are false, noting that no conclusive connection has been found between the three Palestinians who carried out the fatal attack and any terrorist organization.While Gaza-based Hamas praised the bloodshed, it nonetheless refuted ISIS claims of responsibility, asserting the assailants were affiliated with it and the Popular Front for the Liberation of Palestine.According to Rosenfeld, the first attack took place shortly after 7 p.m., as Shabbat began, by Zedekiah’s Cave, some 100 meters from Damascus Gate, the volatile east Jerusalem entrance to the Old City.“Three terrorists coordinated an attack, armed with one Carl Gustav automatic weapon and knives,” Rosenfeld said on Saturday.“Shots were first fired outside Zedekiah’s Cave, and nearby Border Police officers immediately responded and opened fire, killing two of the terrorists at the scene who were armed. One officer and one civilian were moderately and lightly wounded.”Seconds later, as police stationed at Damascus Gate responded and began to search for other assailants, Rosenfeld said a second attack took place when a third terrorist repeatedly stabbed Malka with a knife, critically wounding her before being shot dead.“The female officer was stabbed multiple times and in critical condition before being rushed to the hospital, where unfortunately, she died of her wounds a short while afterwards,” said Rosenfeld.“Police immediately cordoned off the area by Damascus Gate and searched for the possibility of a fourth terrorist.”Rosenfeld said Friday’s rampage was the most serious attack there since Border Police Cpl. Hadar Cohen, 19, was killed and another female officer critically wounded last February by three Arab terrorists wielding machine guns, pipe bombs and knives.The Shin Bet (Israel Security Agency) identified Friday’s assailants as Bara Ibrahim Muhammad Saleh, 19, Adel Hassan Ahmad Anakush, 18, and Osama Ahmad Mustafa Atta, 19.All three had “a background in terrorist activities,” or were arrested by Israeli authorities before Friday’s assault, the Shin Bet said.“We saw two wounded people near Damascus Gate – a man of about 40, and a young man of about 22,” said an MDA spokesman.“They were fully conscious and suffered from penetrating injuries,” the spokesman continued. “We provided them with emergency medical treatment and evacuated them to the hospital.”After identifying the terrorists, the IDF Spokesperson’s Unit said soldiers surrounded the West Bank village of Deir Abu Mash’al, near Ramallah, where the suspects were believed to have resided.“The three hero martyrs who executed the Jerusalem operation have no connection to Daesh [ISIS], they are affiliated with the PFLP and Hamas,” Hamas’ Izzat El-Reshiq wrote on Twitter.In a Facebook post, Hamas spokesman Hazim Qassim added: “The sacrificial operation in Jerusalem that was carried out by three martyrs in Jerusalem confirms that the PA’s attempt to make the relationship with the occupier ‘a normal relationship’ is a failure.”He added: “The Palestinian youth will continue to characterize the occupation as its single enemy.”In another statement, the PFLP identified two of the three attackers as its members.“The media office of the PFLP armed wing mourns two of its hero comrades, [both] freed prisoners,” it said.Meanwhile, Palestinian Authority President Mahmoud Abbas deemed the deaths of the three terrorists a “war crime by the Israeli occupation forces” in a statement published by Fatah spokesman Osama al-Qawasmi.Rosenfeld said the ongoing investigation suggests the three suspects acted alone, similar to the dozens of other attacks that have plagued the capital since the so-called stabbing intifada began in September 2015.“[The terrorists] appear to have worked independently, and at this point no connection has been made to any terrorist organization,” he said. “Police and security agencies are carrying out investigations to determine how the terrorists arrived in the area.”Noting the continuation of Ramadan, Rosenfeld said heightened security will continue by Damascus Gate and throughout the Muslim Quarter to prevent more attacks, while permitting thousands of Muslims to pray at al-Aksa Mosque.“Police are continuing security assessments and measures for the remaining Ramadan period, which is highly sensitive,” he said.“Unfortunately, the officers stationed in the area were there to allow thousands of people to arrive at the Temple Mount for Friday prayers, and on the same evening police had to respond to one of the most serious terrorist attacks that have taken place.”The funeral for Malka will take place shortly after midnight on Saturday at the military cemetery in the port city of Ashdod, Rosenfeld said, adding that her family requested that the funeral not be open to press coverage.Jerusalem Mayor Nir Barkat commended Malka for her bravery and service, and sent his condolences to her family.“A harsh Shabbat passed over Jerusalem,” he said. “On behalf of the residents of Jerusalem, I send condolences to the family of Border Police St.-Sgt.-Maj. Hadas Malka, a strong patriot and living story that fills us all with pride and great sadness.”Barkat continued: “The security forces will continue their work to protect the residents of Jerusalem.”Also, on Friday, the IDF foiled an attempted stabbing attack outside the Alon Shvut settlement in Gush Etzion. A Palestinian attacked an Israeli man who attempted to fight him off. He was lightly wounded from the physical violence between the two, but was not stabbed. The IDF, which protects that area, saw the attack, arrived immediately and arrested the Palestinian, according to the IDF.Tovah Lazaroff and Adam Rasgon contributed to this report.