The deal with US defense contractor Raytheon, which would see Poland buy eight Patriot missile defense systems, is expected to be finalized in November of this year. 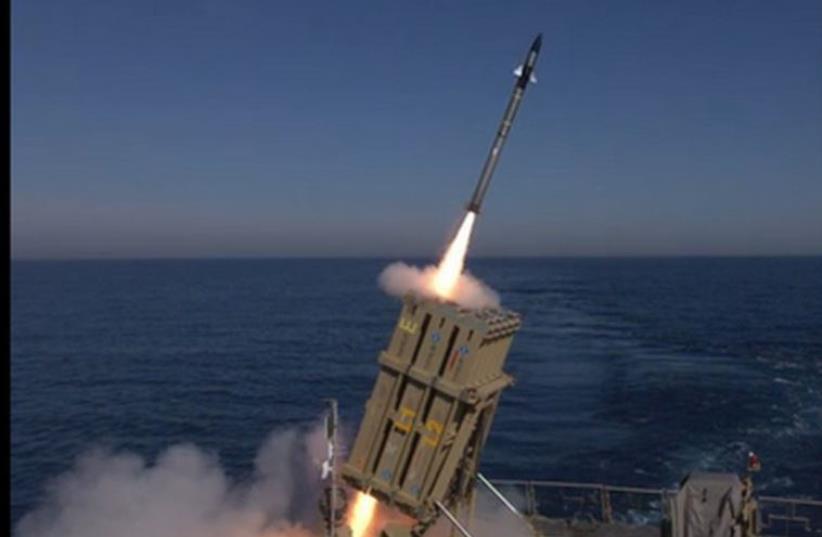 Rafael Advanced Defense Systems’ C-Dome system, a sea-based version of the Iron Dome anti-rocket battery, fires from an Israeli Navy missile ship
(photo credit: screenshot)
Advertisement
Poland has signed a memorandum of intent with the United States to buy the Patriot missile system along with interceptor missiles from Israel’s David Sling missile defense system in a deal worth close to $8 billion.“A memorandum was signed tonight that the US government has agreed to sell Poland Patriot missiles in the most modern configuration,” Polish Defense Minister Antoni Macierewicz said on Thursday.In light of ongoing tensions in eastern Europe following Russia’s occupation of Crimea, and ongoing fighting in the Ukraine, Poland has been modernizing its military, spending over $14.5b. on acquiring new weapons and military equipment, including new aerial defense systems.
David"s Sling successfully test [File]
The deal with US defense contractor Raytheon, which would see Poland buy eight Patriot missile defense systems, is expected to be finalized in November of this year.While a spokesman for Israel’s Rafael Advanced Defense Systems stated that no deal has yet been signed, according to reports, the company would make an estimated $1b. from the deal, making it one of the largest deals ever signed by Rafael. Once the deal is signed, Poland will become the first export client of David Sling’s interceptor missile.According to Ynet news, Warsaw insisted that the Patriot system be configured to use the Israeli missile due to its superior performance at only 10% of the cost of the American Patriot missile, which is designed to intercept tactical ballistic missiles, low-flying cruise missiles as well as aircraft.While a Patriot missile costs $4.5 million, a David’s Sling missile costs $450,000.Marketed abroad under the name “Skyceptor,” David’s Sling is a joint Israeli-US project, with Rafael collaborating with Raytheon, which also produces the Patriot missile system.Other components of the system were developed by Elta – a subdivision of Israel Aerospace Industries – which developed the system’s radar, and the Elisra subdivision of Elbit Systems, which developed the command and control mechanisms.Israel’s air defenses currently include the Iron Dome, designed to shoot down short-range rockets, and the Arrow system, which intercepts ballistic missiles outside of the Earth’s atmosphere. The David’s Sling missile defense system is designed to intercept tactical ballistic missiles, medium- to long-range rockets, as well as cruise missiles fired at ranges between 40 km. and 300 km.