"Separating from the Palestinians is existential for Israel's future, and if I am in a position to do it, I will because I am a patriot," Lapid said. 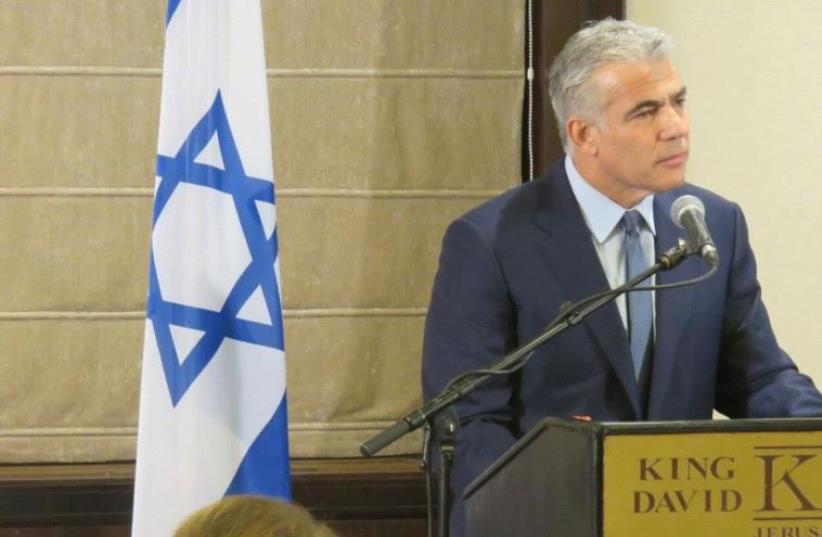 Yair Lapid at a meeting with the Foreign Press Association at Jerusalem’s King David Hotel.
(photo credit: YAIR ZIVAN)
Advertisement
International media outlets like The Guardian are responsible for discouraging the PA leadership from making concessions necessary to end their conflict with Israel, Yesh Atid leader Yair Lapid said Monday in a meeting with the Foreign Press Association at Jerusalem’s King David Hotel.Lapid responded to a question that he regarded as hostile from Antony Loewenstein, a Jerusalem- based freelance reporter who writes for the Guardian and other publications.“You talked before about the idea that since Oslo, Israel has done little or nothing wrong, but the truth is that 2017 is the 50th anniversary of the occupation.There are now 600,000- 800,000 settlers, all of whom are regarded by international law as illegal, including your good friends in Amona apparently,” Loewenstein’s question began.“Is there not a deluded idea here that many Israeli politicians, including yourself, continue to believe that one can talk to the world about democracy, freedom and human rights while denying that to millions of Palestinians, and will there not come a time soon, in a year, five years, 10 years, where you and other politicians will be treated like South African politicians during Apartheid?” he asked.Lapid responded by saying that the question was full of errors and calling it the perfect example of how this is an era that is “post-truth and postfacts.”“It’s a declared policy of Israel that we need to go to a two-state solution and the ones who refused it were the Palestinians,” Lapid said. “The ones who call Jews pigs and monkeys in their school books are the Palestinians. The problem is that the Palestinians are encouraged by the Guardian and others saying we don’t need to do anything in order to work for our future because the international community will call Israel an apartheid country.”Lapid said Israel is not an apartheid country but rather a law-abiding democracy, and that unlike the Palestinian leadership, Israel was making sure the Palestinians’ human rights are protected.“Why don’t you go to the Palestinian Authority or to Gaza and ask them about women’s rights, gay rights, Christian rights,” Lapid told the reporter.Loewenstein told The Jerusalem Post that he found Lapid’s answer “deeply disappointing and dishonest.” He said Lapid “showed little difference between himself and [Prime Minister Benjamin] Netanyahu and was unwilling to say anything of substance about the current Israeli leadership.”Responding to another question about his defense of the people of Amona, Lapid said there was a difference between supporting them and showing them empathy.“Their life’s dream is falling apart, and they’re not the enemy,” he said.But Lapid told the crowd he was still planning on voting against the settlements regulation bill, which he said would hurt Israel in the international community and harm the stature of the Supreme Court.“We can’t allow this in a democratic country,” he said. “It would have a hard time passing, and if it did pass, it would be disqualified by the Supreme Court and rightly so.”According to a source present at the event, reporters shouted at Lapid for repeatedly refusing to criticize the prime minister, as is his policy when speaking to English-language media. But Reuters Jerusalem bureau chief Luke Baker denied that anyone shouted at him. When asked how he was different from Netanyahu, he said that when it comes to separating from the Palestinians, he “means business.”“Separating from the Palestinians is essential for Israel’s future, and if I am in a position to do it, I will, because I am a patriot,” he said.Later, at a meeting of the Yesh Atid faction, Lapid strongly criticized Netanyahu in Hebrew for his initiative to make political appointments easier. He said Netanyahu was not making an effort to help the poor but was instead trying to help his political cronies.“What should a young person in Kiryat Shmona or Kiryat Gat who studied for a degree think when they find out that what matters to get work is political connections?” Lapid asked. “[Netanyahu] forgot the citizens of the state, because all that matters to our politicians is politics and political patronage positions.”Opposition leader Isaac Herzog also criticized Netanyahu in his Zionist Union faction meeting.Referring to an interview the prime minister gave on the American show 60 Minutes, he said he was glad Netanyahu still supports a two-state solution when he is speaking in English.Herzog’s Zionist Union rival, MK Erel Margalit, slammed him in an Army Radio interview Monday, calling him “not relevant at all” and saying that he is “not the opposition to Netanyahu but his coalition in-waiting.”