Police interrogate Ghattas on suspicion of smuggling phones to prisoners

MK denies seeking to harm state security but does not deny charges against him. 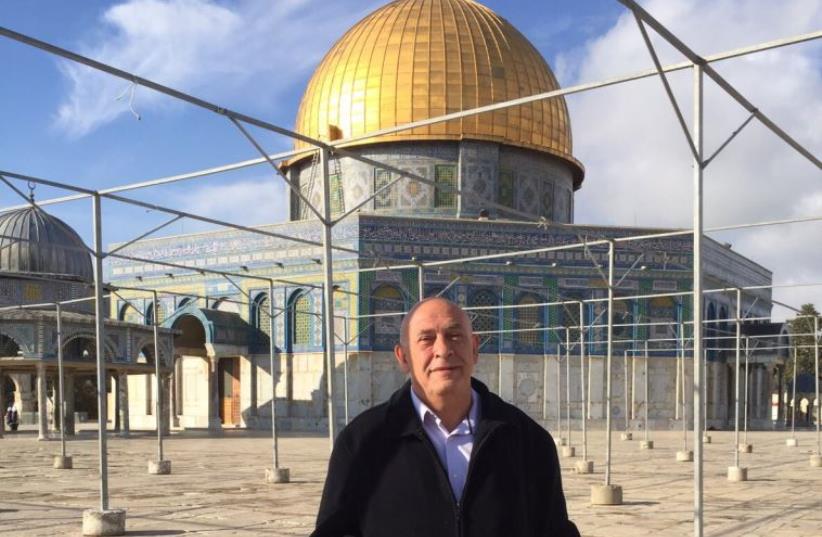 MK Basel Ghattas at Temple Mount
(photo credit: BALAD SPOKESPERSON)
Police questioned Arab-Israeli MK Basel Ghattas (Joint List) on Tuesday on suspicion of smuggling cell phones to Palestinian prisoners convicted of terrorist and security-related crimes.According to an Israel Prison Service spokeswoman, the IPS found 15 cellphones and SIM cards on two Palestinian security prisoners in the Ketziot Prison in the Negev after Ghattas concluded a visit to the prisoners. Both of the prisoners are members of Fatah. One the prisoners, Walid Daka, whom Ghattas allegedly met, is serving a 37-year prison sentence for the kidnapping and murder of IDF soldier Moshe Tamam.As a Knesset member, Ghattas has immunity and is not searched when he visits prisoners. The IPS believes he took advantage of his immunity to smuggle in the phones. On Monday, authorities opened the investigation, with the approval of Attorney-General Avichai Mandelblit.Police said they are investigating Ghattas for suspected fraud, breach of trust, conspiracy and inserting prohibited and dangerous objects into the Israeli Prison Service.“This is all political persecution. Everything’s okay, we are used to this kind of investigation. Everything is in order to harm our struggle,” Ghattas said to a group of journalists on Tuesday before entering police questioning at the Lahav 433 office in Lod.In a statement, Ghattas denied accusations that he was seeking to harm state security, but did not deny that he smuggled banned materials into the prison. Instead he contended he was acting out of “humanitarian” considerations. “I am committed for moral reasons to the humanitarian rights, the prisoner issues is a painful and unbearable, the prisoners suffer from harsh conditions,” Ghattas said.Also Tuesday, the Knesset House Committee voted to ban lawmakers from visiting Palestinians convicted of terrorism or security-related crimes in prison, in a move inspired by the allegations against Ghattas.The House Committee adopted Public Security Minister Gilad Erdan’s recommendation, which was based on Shin Bet chief Nadav Argaman’s proposal, and decided that visits to security prisoners, as defined by the IPS, no longer fall under MKs’ parliamentary immunity.Exceptions can be made for a few committee chairmen from the coalition and opposition, who can visit security prisoners to allow parliamentary oversight of the conditions of their incarceration.
The ban will mostly impact Joint List MKs, many of whom regularly visit Palestinian security prisoners, but some other lawmakers will also be affected, such as MK Amir Peretz (Zionist Union) who sporadically visits Fatah leader Marwan Barghouti.Erdan said that MK visits to Palestinians convicted of terrorism “strengthen their status, which they use to harm national security. The allegations against MK Ghattas show the potential of harm to our security that these visits allow.”House Committee chairman Yoav Kisch (Likud) called the prison visits “outrageous,” and said “the party is over.”MK Oren Hazan (Likud) was the only coalition member in the committee not to vote for the ban and abstained, because it would also apply to Jewish security prisoners. “If the decision was only about Arab security prisoners, who are traitors and enemies, I would be the first to support it and vote in favor,” Hazan said.Meanwhile, in the Knesset, Environmental Protection Minister Ze’ev Elkin continued his signature-gathering operation to start the process of impeaching Ghattas. He needs 70 signatures, including 10 from the opposition, to call a hearing in the Knesset House Committee. However, the leaders of all the opposition’s factions came out against the effort, saying they would rather let the police and judiciary deal with Ghattas.Elkin said he is in favor of letting the criminal justice process move forward, but that doing so does not contradict impeaching Ghattas.“The criminal process should happen as fast as possible, but… it’ll take a year or two,” Elkin explained on Army Radio. “Once [Ghattas] is no longer an MK the process will go more quickly, because the police will not have to beg him to show up for questioning.”Ghattas cannot be arrested as long as he has parliamentary immunity. His immunity can be removed if the attorney-general decides to do so, though Ghattas can appeal the decision. But first, the police must make recommendations to the State Attorney’s Office, which studies the recommendations and gives them to the attorney-general, who would then draft an indictment. Ghattas would get a hearing before the actual indictment could be submitted and his immunity gets removed.Elkin waved off the argument that impeaching Ghattas would be considering him guilty before he had his day in court.“Notice that in the last two days no one heard Ghattas say, ‘I didn’t do it,’” the minister said. “The facts are very clear here, and he doesn’t deny them.”MK Oded Forrer (Bayit Yehudi) submitted a bill inspired by Ghattas, that is meant to deter MKs from committing security offenses in the future.The legislation would double the penalty for such crimes if committed by an elected official.
“Elected officials must understand the great responsibility they have,” Forrer said. “We are exposed to confidential materials and are allowed to enter places to which not all citizens have access, and together with authority comes responsibility.”Therefore, according to Forrer, when an elected official harms national security it is worse than others, and because he or she was sent to represent Israeli citizens.“I hope this bill will be legislated quickly and will lead MK Ghattas to be punished as severely as possible,” he added.