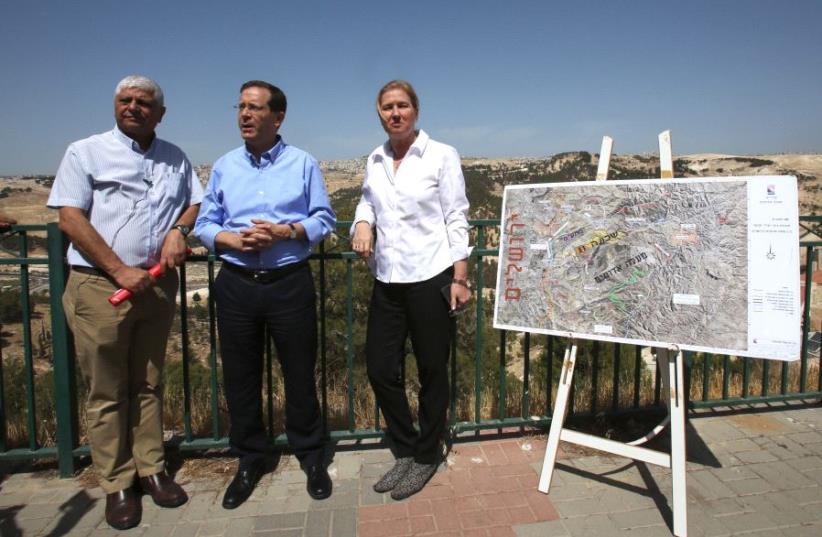 Isaac Herzog, Tzipi Livni with Ma'ale Adumim Mayor Benny Kashriel, May 18 2017.
(photo credit: MARC ISRAEL SELLEM/THE JERUSALEM POST)
Advertisement
Zionist Union leaders and MKs visited settlement blocs Thursday in a message to US president Donald Trump four days ahead of his visit to Israel.Party head Isaac Herzog said he hoped Trump's visit would be successful. He said Trump's presidency was a great opportunity to reach an agreement with the Palestinians in which Israel would keep settlement blocs like Ma'ale Adumim."Ma'ale Adumim was built by Yitzhak Rabin in his first term as prime minister," Herzog said, looking out at the Jerusalem hills. "A month before Rabin's assassination, he promised at the Knesset that Ma'ale Adumim will be part of Israel in any agreement. We are here because we believe in a diplomatic agreement, keeping the settlement blocs, and separating from Palestinians."Livni told The Jerusalem Post at the event that the timing of the visit was coincidental and her party's message was consistent: The blocs like Ma'ale Adumim should not be "held hostage" by outposts like Amona. The visit, which was part of a series of tours of cities around the country was attended by MKs Eitan Broshi, Yoel Hasson, Ayelet Nahmias-Verbin, Yael Cohen-Paran, and Revital Swid. Other Zionist Union MKs who are more dovish, including Merav Michaeli, Erel Margalit, and Stav Shaffir, declined to participate.Following the visit to Ma'ale Adumim, the MKs were set to tour Gush Etzion Thursday afternoon