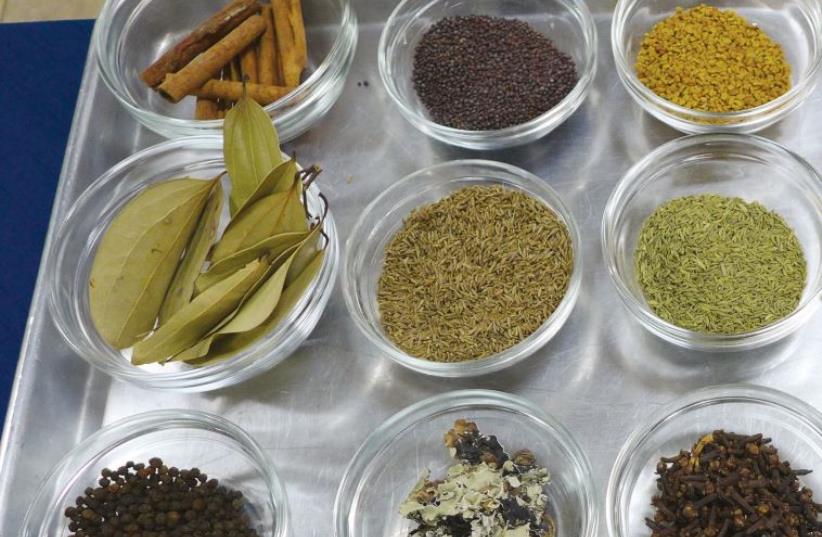 Minty Peas Pulao This rice dish, says Godbole, has a Mogul influence and is extremely easy to make. It is “ever so delicately fragrant.... It pairs beautifully with rich meaty dishes, with a side of a simple daal (a legume dish) or savored on its own.”Godbole notes that the rice “must be coated in the spices before the liquids are added or else one will end up creating a rice mush versus a pulao.”

Makes 4 servings Tier One:
■ 2 Tbsp. ghee
■ ¾ tsp. cumin seeds or black cumin seeds
■ ½ cup white onion, sliced
■ 1 tsp. fresh ginger, crushed to a paste
■ 1 tsp. fresh garlic, crushed to a paste
■ 1 tsp. whole black peppercorns Tier Two:
■ 1 bay leaf (optional) Tier Five:
■ 1 cup uncooked basmati rice
■ ½ cup blanched peas
■1¼ cups boiling water Tier Six:
■ 1 tsp. salt (or to taste)
■ ¼ cup fresh mint leaves, chopped
■ ¼ cup unsalted cashews, see Prep Prep: Before beginning the recipe, heat the ghee in a heavy bottomed saucepan (the one in which you will cook the rice) and fry the cashews until they are golden. Remove them and set them aside. Rinse the basmati rice in a cup of cold water and set aside.Cooking: Begin by using the same ghee and utensil in which the cashews were fried.Heat the ghee, add the cumin seeds and allow them to sizzle but not burn. When the ghee is fragrant with the aroma of the cumin seeds, add the sliced onions and sauté until they are soft and golden in color. Add the ginger paste, garlic paste and the whole black peppercorns, sautéing for 1 minute. Add the bay leaf and continue to cook for about 30 seconds more on medium low heat.Slowly add the rinsed rice and blanched peas to the pot and stir into the spiced ghee using a spatula. Take care that the grains do not break but are evenly coated with the flavors and are glossy. Very carefully, from the side of the pot, add the boiling water to the pan and stir once again. The pot will steam up, and the spices will sizzle and bubble. Season with salt and let it come to a boil over medium heat. When the water has almost evaporated, stir in the chopped mint leaves, cover and let the rice finish cooking on low heat for another 10 to 12 minutes, until the grains are fluffy, light and cooked. Do not be tempted to stir again. Garnish with the fried cashews and serve hot.Effortless Baby Potatoes with Mustard Seeds For this easy dish, in addition to mustard seeds, Godbole flavors the potatoes with fresh ginger, cayenne and lemon juice.

Makes 3 to 4 servings Tier One:
■ 1 Tbsp. cooking oil
■ 2 Tbsp. black mustard seeds
■1 tsp. fresh ginger, julienned Tier Three:
■ ¼ tsp. turmeric powder
■ 1 tsp. cayenne pepper powder Tier Five:
■ 450 grams (1 pound) baby red potatoes, see Prep Tier Six:
■ 1 tsp. salt, or to taste
■ ½ tsp. fresh lemon juice
■ ¼ cup fresh cilantro (optional) Prep: Wash the potatoes in cold water; ensure the skins are clean. Place them in a pot of salted water and boil them to cook until just tender, 6 to 9 minutes. Take care they are not overcooked. Drain and set aside.Cooking: Heat the cooking oil in a wok or sauté pan. Add the black mustard seeds and allow these to pop open. Reduce the heat to medium low, add the ginger and stir it in, allowing it to flavor the oil for one minute. Carefully add the turmeric powder and cayenne pepper powder, give it a quick stir and immediately add the cooked baby potatoes. The oil may sizzle a little.Stir the potatoes to coat them evenly with spices. Season with salt and lemon juice. Reduce the heat to low and continue cooking to let the potatoes crisp up slightly, about 3 to 4 minutes.Garnish with fresh cilantro just before serving.Cheesy Stuffed Peppers “Stuffed peppers such as these make an elegant and colorful treat on a festive table and are particularly welcome at potlucks,” writes Godbole. She made this dish using dark-green, semi-hot poblano peppers but notes that you can also bake the stuffing in sweet peppers or in tomatoes. Garam masala powder is a popular Indian spice blend.Makes 6 servings ■ 2 Tbsp. oil
■ 2 tsp. cumin seeds
■ 1 large onion, finely chopped
■ 1 tsp. ginger paste
■ 1 tsp. garlic paste
■ 1 jalapeño or other fresh hot pepper, seeds removed and finely chopped
■ 1 tsp. garam masala powder
■ 2 large baking potatoes, boiled, peeled and mashed
■ Salt, to taste
■ ¼ cup shredded Parmesan cheese
■ 1 tsp. lemon juice
■ 1 tsp. sugar
■ 3 dark green semi-hot or sweet peppers, rinsed
■ 2 to 3 Tbsp. oil, for basting
■ Lemon wedges for garnish Heat oil in a saucepan and add cumin seeds. When these sizzle, add onion and sauté until golden. Add ginger paste, garlic paste and jalapeño, and allow to cook for 1 minute. Remove from heat and stir in garam masala powder. Add mashed potatoes, salt, Parmesan cheese, lemon juice and sugar, and mix well until combined. Cool completely.Heat oven to 190°C (375°F). Halve peppers and remove seeds. Baste them with a little oil. Fill peppers with the stuffing, and bake for 15 minutes. Turn to a low broil for 5 minutes or until tops begin to crisp. Serve hot with lemon wedges.
Advertisement
PREMIUM Log Out
Subscribe for our daily newsletter