With America and world Jewry still reeling from the Pittsburgh massacre, developments are under way in the Start-up Nation to help prevent or at least mitigate the next shooting spree.

By HALEY COHEN
FOLLOWING THE October 27 shooting, US President Donald Trump and First Lady Melania Trump walk with Tree of Life synagogue rabbi Jeffrey Myers as White House advisers Ivanka Trump and husband Jared Kushner walk with Treasury Secretary Steven Mnuchin, outside the synagogue on October 30.
(photo credit: REUTERS)
Advertisement
The Jewish world is still processing the deadliest attack ever against Jews on American soil after a virulent antisemite stormed the Tree of Life synagogue in Pittsburgh two weeks ago, murdering 11 and wounding six congregants at Shabbat morning services. Sadly, such tragedies have become all too common in the US, home to nearly as many mass shootings as days in the year.The October 27 massacre in Pittsburgh marked the 294th mass shooting of the year, according to the nonprofit Gun Violence Archive, which tracks shootings in the US. Americans are more likely to die from gun violence than many other leading causes of death combined, with close to 11,000 people in the US killed in firearm assaults each year.Ideally, one of the best ways to prevent mass shootings, experts say, is to control who can purchase and use a gun. In Israel, citizens who are licensed to own a personal weapon have generally undergone military training. Guns are seen as a tool for self-defense only, not a hobby. Despite a few horrific experiences in the context of political violence, such as the assassination of prime minister Yitzhak Rabin in 1995, the gun death rate in Israel is consistently lower than international averages. But in the US, the politically powerful gun lobby coupled with recent Supreme Court decisions that apply the Constitution’s Second Amendment to personal gun ownership make sweeping gun control legislation unlikely, especially during the administration of President Donald Trump, who has made gun owners a core political constituency.In light of this reality, technological countermeasures, such as those being developed by Israeli entrepreneurs and data scientists, might soon be available to help American law enforcement and first responders reduce the scourge of gun violence plaguing their country. These generally fall into two categories: training and technology.“The US is far behind Israel in the prevention of mass shootings and other dynamic threats,” Scott Goldstein, captain of the Pikesville Volunteer Fire Department in Baltimore, Maryland, told the Magazine. “Israelis have many years of experience dealing with suicide bombers, stabbings in buses – not to mention the [constant] state of war.”Goldstein added that despite all of these threats, he feels safer walking in the streets of Israel than he does at home in Baltimore. “Israelis have more built-in security measures in many places where there are large gatherings. The mind-set of the average Israeli is to be more vigilant.”Goldstein is the US director of training for the Emergency Volunteers Project (EVP), an organization that prepares American first responders to deploy to Israel in time of crisis. Since its inception in 2009, EVP has trained close to 1,800 emergency responders throughout the US and Israel.“EVP is a tangible demonstration of the unbreakable bonds between Israel and America. Through our program, Israeli rescue services obtain reliable manpower during crises and the American emergency services personnel gain firsthand experience in mass casual and terrorism that make them better responders in their home communities,” Eitan Charnoff, director of Emergency Deployment and spokesperson for EVP, told the Magazine.While EVP’s primary goal is to provide American assistance to Israel during natural disasters or terrorist attacks, Goldstein echoed that the partnership goes both ways. When it comes to dealing with a mass casualty incident, such as a shooting, Goldstein has brought back to Baltimore what he’s learned from his Israeli peers.“I’ve learned their tactics – everything from triage to transport,” he said. “Israelis are less tied to treatment protocol, they are very focused on transport protocol. They use motorcycles to get into the scene and keep ambulance transport outside of the incident to be able to get out of the scene faster,” a medical countermeasure that could improve outcomes for victims of gunshot wounds. “Despite the cultural and language barriers between Americans and Israelis, the level of trust that’s automatically there between us is really significant.” 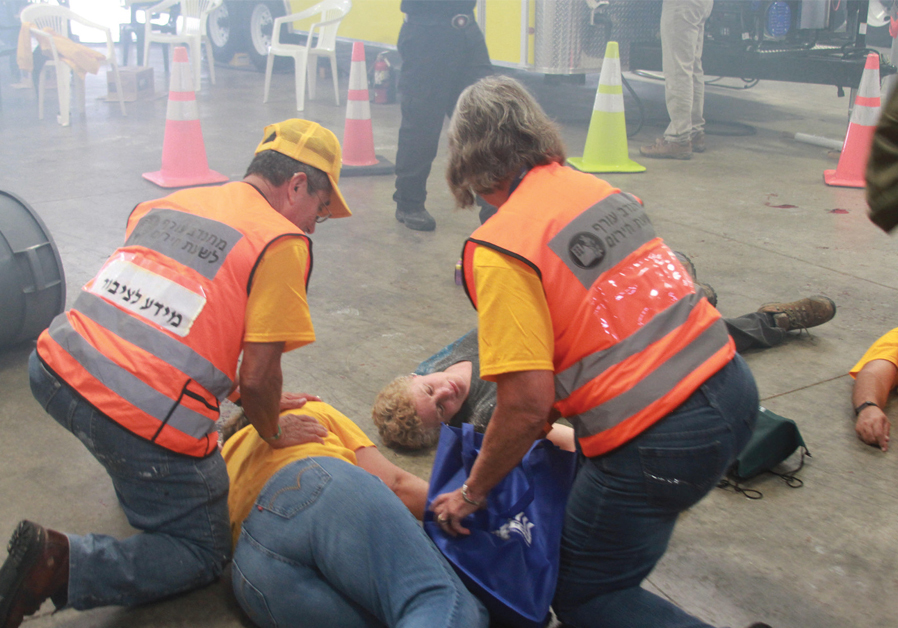 IN ACTION: The Emergency Volunteers Project trains American and Israeli first responders to respond to mass causality incidents. (EITAN CHARNOFF)
AI and big data A consultant in criminal investigations who works for an Israeli big data company and requested his and the company’s name remain anonymous had an explanation for Goldstein’s claim that the US remains significantly behind Israel in preventing mass shootings.“The major problem is that US police just don’t have enough money to process the information,” he said. “Technologies that overcome these challenges use artificial intelligence and big data. They utilize data management tools that can process virtually unlimited amounts of information,” he said, referencing the same machine-learning technology that allows the iPhone X to identify a user’s face.He added that police don’t have the time or resources to do what technology could quickly get done. “Automatic transcription is still very difficult, even for machine learning, but if police had more databases to put information into, they could easily use this. Right now police would have to look manually through thousands of hours of video footage. The main thing is that technology allows you to search quickly and transform information into something that is searchable.”Police capability to quickly search through footage wouldn’t just help them catch a suspect following a crime; it could actually provide tools to prevent a mass shooting before it occurs.“Preliminary signs can be identified, such as expressive language on social media. It never happens that someone didn’t hate anyone yesterday and then suddenly wakes up and wants to shoot 20 people; there are always warning signs and you need to monitor from far back to prevent,” the consultant told the Magazine.Researchers at Ben-Gurion University developed an algorithm based on those preliminary signs. Technology called “natural language processing” identifies school shooters based on personality traits that appear in their writing. In their study, the researchers selected writing by six shooters involved in major school massacres, including Virginia Tech. They compared their writings with 6,000 other people (who are not shooters), and had the computer identify the shooters.The computer would take a word, for example, “depressed” and then find words that appear in the same context, such as “suicidal,” “lonely” or “sad.” By doing so, it can determine the degree to which feeling depressed is expressed in the text. Once the number of times each word was used is found, the technology determines the distance between each word. The closer together each of the words are, the higher the expression of depression is in the text. This method can be used for screening of depression in texts; the word that is used can change based on what is being tested for. While the computer was not able to select individual people, it did reduce the number of suspects to 3% of the original chosen people, which included the writing of all six shooters.The criminal investigation consultant noted, “About 50% of [mass casualty] cases could have been prevented by using a thorough investigation with artificial intelligence.” But what should be done about the other 50% – the instances when technology wasn’t enough to stop a gunman? 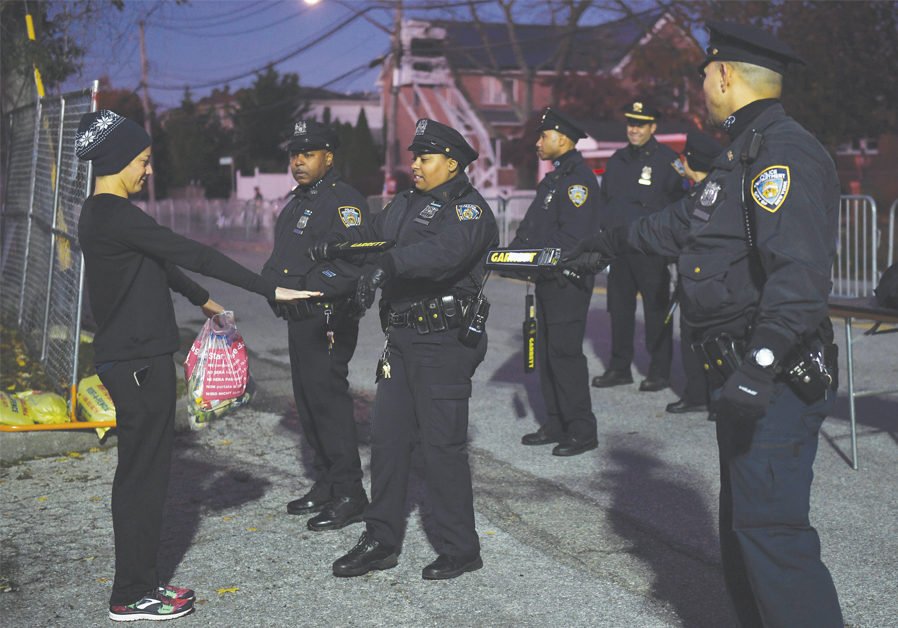 NEW YORK Police Department officers conduct searches before the New York City Marathon on November 4: ‘US police don’t have the time or resources to do what technology could quickly get done.’ (REUTERS)
Improving response times Amir Elichai founded Carbyne four years ago following his own traumatic event. When trying to call police in Tel Aviv, he found their reaction was dangerously slow.“They were asking me so many questions rather than just responding to the incident. What was my location? Who were the people around me?” he said. Carbyne, referred to as “the next generation of 911,” is a call-handling platform that encompasses IP-based communication features to help dispatchers analyze and process what is happening in real time, provide support and slash time-to-dispatch. The system integrates into already existing 911 technology.The company has an office in New York City but has yet to be used during an American mass shooting, according to Elichai. Carbyne has been used – and saved lives – during a shooting in Israel.Retired Israeli police bomb technician and counter- terrorism expert Moshe Guttman insists that technology should come second when preventing, and responding to, a mass shooting. During his 23 years as a bomb technician, Guttman participated in and investigated over 70 terrorist scenes and mass casualty incidents. Since retiring, he dedicates his time to train Americans how they can respond to terrorism the way Israelis do. He travels through the United States, having recently returned from a training in Lakewood, New Jersey, when he spoke to the Magazine.“Human resources should be No. 1 before technology. Technology will assist, but it never trumps human resources. The world is too concerned right now with more cameras, more artificial intelligence,” he said. Guttman emphasized that most important aspects are prevention and response.“Israel is one of the only countries that deals with prevention. Most countries spend billions of dollars only on responding. But what about how to prevent? That is what Israel brings. My doctrine is if you do it well and put 70% of efforts into prevention, you won’t need a response.”Guttman’s tactical training, called Total Solutions International, includes self-defense – which he clarified is different from krav maga. He said it is important to know about pressure points. Guttman added that women are naturally more suspicious in potentially dangerous situations, a trait that could be helpful for everyone.“Train, prepare, change the mind-set. We are available for everyone,” he said.Following the February shooting that left 17 students and instructors dead in Parkland, Florida, former governor of Arkansas Mike Huckabee reportedly received heat for tweeting “just waking up in Israel to news of heartbreaking school shooting in FL. Reminded that Israel pretty much eliminated it by placing highly trained people strategically to spot the one common thread – not the weapon, but a person with intent.” Critics of the politician, who is a strict supporter of the right to bear arms, quickly responded that it isn’t tight security that protects Israel from shootings, but laws that regulate who can own and carry a gun.But Huckabee was partially right: the Start-up Nation has developed countermeasures to mass shootings that the US could benefit from.