Amid post-coup purge, EU warns Turkey it's bound not to use death penalty 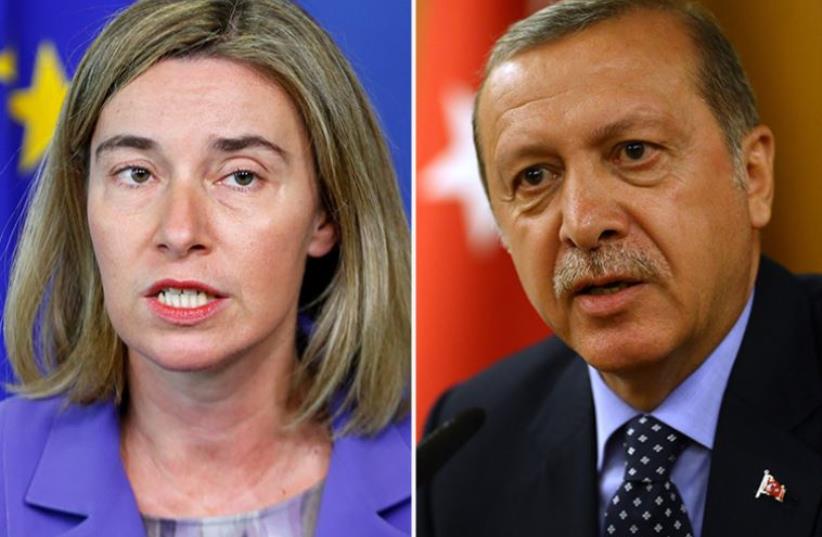 Mogherini and Erdogan
(photo credit: REUTERS)
Advertisement
BRUSSELS - The European Union reminded Turkey on Monday that it is bound by its commitments under the European Convention on Human Rights and as a member of the Council of Europe not to reintroduce the death penalty."No country can become an EU member state if it introduces the death penalty," EU foreign policy chief Federica Mogherini told reporters when asked about suggestions that EU accession candidate Turkey might execute leaders of the failed coup.She also noted that Turkey was a member of the Council of Europe and a signatory of the European Convention on Human Rights, which bans capital punishment across the continent:"Turkey is an important part of the Council of Europe and is bound by the European Convention on Human Rights, which is very clear on the death penalty," she said. Crowds at rallies have repeatedly called for the death penalty for the plotters of a failed coup that attempted to topple the government on Friday night. Turkey outlawed capital punishment in line with its efforts to join the European Union.On Monday, Turkish Prime Minister Binali Yildirim said it is not correct to make a hasty decision about the death penalty, but Turkey cannot ignore the demands of its own people.Yildirim also said in his comments following a cabinet meeting that reinstating the death penalty would require constitutional change. Turkey suspended thousands of police officers on Monday, widening a purge of the armed forces and judiciary after a failed military coup, and raising concern among European allies that it was abandoning the rule of law.A senior security official told Reuters 8,000 police officers, including in the capital Ankara and the biggest city Istanbul, had been removed from their posts on suspicion of links to Friday's coup bid by a faction in the army.Thirty regional governors and more than 50 high-ranking civil servants have also been dismissed, CNN Turk said.Thousands of members of the armed forces, from foot soldiers to commanders, were rounded up on Sunday, some shown in photographs stripped to their underpants and handcuffed on the floors of police buses and a sports hall. Several thousand prosecutors and judges have also been removed.More than 290 people were killed and around 1,400 wounded in the violence on Friday night, as soldiers commandeered tanks, attack helicopters and fighter jets in a bid to seize power, strafing parliament and the intelligence headquarters and trying to seize the main airport and bridges in Istanbul.