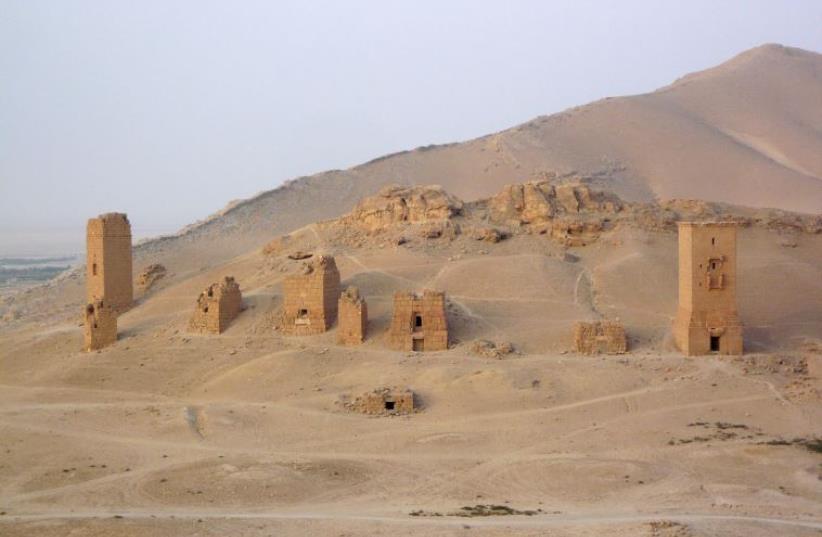 Tower tombs in the Valley of Tombs, west of the historical city of Palmyra, Syria.
(photo credit: REUTERS)
Advertisement
DAMASCUS - Islamic State has blown up three ancient funeral towers in the ancient city of Palmyra, Syria's antiquities chief said on Friday, continuing the destruction of a World Heritage site that UNESCO has condemned as a war crime.The militants, who have already attacked two Roman-era temples in the city, blew up the tombs dating from between 44 and 103 AD, Maamoun Abdulkarim told Reuters.He cited sources in Palmyra who confirmed the destruction of the tombs, including that of Elahbel, built in 103 AD.The four-storey building was one of the best preserved of Palmyra's funeral towers, sandstone constructions built to hold the remains of the ancient city's richest families.The Syrian Observatory for Human Rights monitoring group said the towers were blown up within the past two weeks.Islamic State, which has declared a caliphate in land it holds across Syria and Iraq, seized Palmyra from Syrian government control in May. The militants beheaded the 82-year-old guardian of Palmyra's ancient ruins last month.The group has used the city's ancient amphitheater for public killings and destroyed monuments it considers sacrilegious, publishing photographs or videos of its actions."We expect more damage to the monuments of Palmyra, but of course it is unpredictable because it is obviously to attract the attention of the public," said Tomasz Waliszewski, director of the Polish Centre of Mediterranean Archaeology which has carried out projects at Palmyra since the 1970s.He said there were concerns about the fate of other important parts of Palmyra, including the vast Roman-era necropolis and the main kilometer-long colonnaded street.UNESCO says Islamic State's actions are war crimes aimed at wiping out evidence of Syria's diverse cultural history.The group is keeping tight control on communications inside the city, making it difficult to track events.In the past two weeks the militants blew up part of the Temple of Bel, one of Palmyra's most significant features, and the Baal Shamin temple as well as a row of columns, a U.N. analysis of satellite images confirmed.