PA president swears in unity gov't with Hamas in Ramallah after compromise on Ministry of Prisoner Affairs reached. 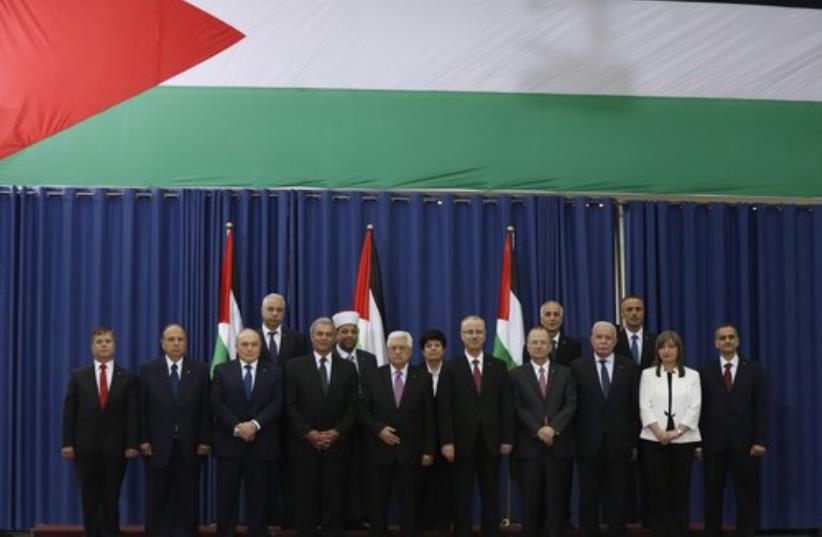 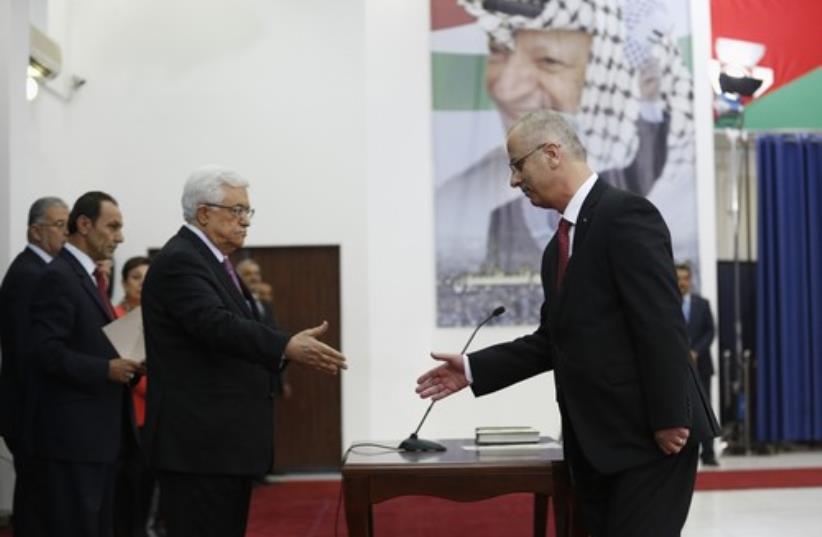 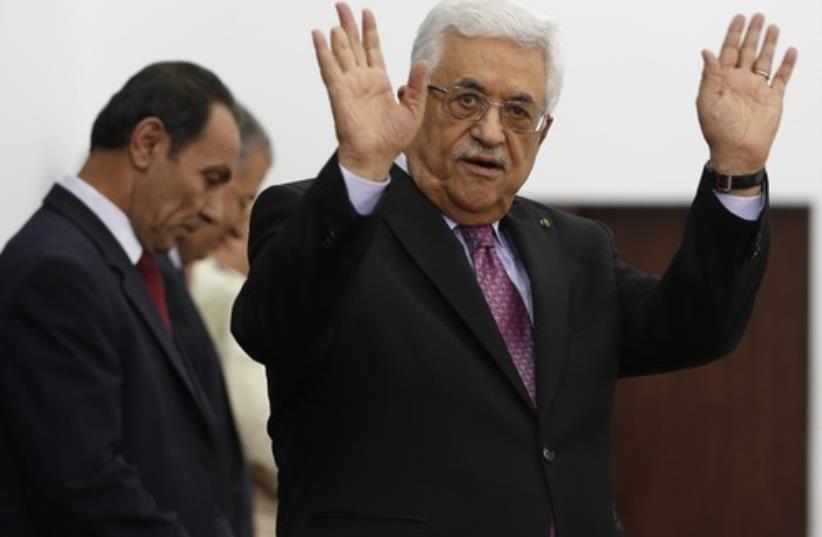 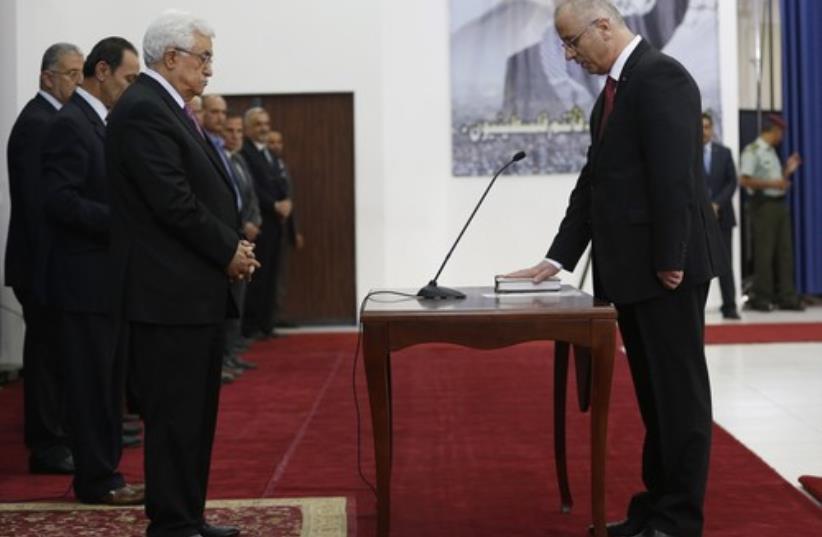 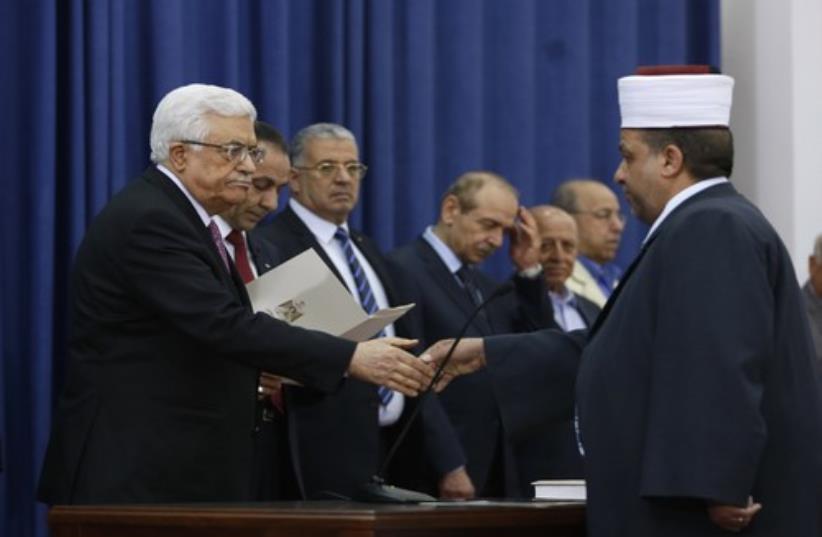 Ministers in the new administration, whom Abbas has said would be politically unaffiliated, took the oath of office in a televised ceremony in Ramallah. The swearing in of the unity government appeared to mark a significant step in repairing ties between the rival Palestinian factions which have been at odds since 2007 when Hamas seized control of the Gaza Strip from Fatah.Monday's ceremony came after Hamas and Fatah signed a reconciliation deal in April to form the transitional government which is now slated to pave the way for general elections in 2015."Today, after announcing the government of national unity we declare the end of division that caused catastrophic harm to our cause," Abbas said.At the inauguration ceremony, Abbas said the new government would abide by commitments made by previous Palestinian administrations and by agreements ratified by the umbrella Palestine Liberation Organization, a reference to interim accords with Israel.The unity government had appeared to be in danger earlier Monday when Hamas informed Fatah it would not recognize a unity government that did not have a Ministry for Prisoners Affairs.Hamas spokesman Sami Abu Zuhri said his movement would consider the Palestinian Authority president's announcement of the new government a "unilateral" step. Hamas, he added, "will not recognize this announcement." But Hamas official Salah Al-Bardaweel later said it was agreed that the ministry would be given to Prime Minister Rami Al-Hamdallah, "and the dispute between Hamas and Fatah has been resolved."Ismail Haniyeh, the outgoing Palestinian prime minister in Gaza, said in a speech in the enclave that it was "a historical day" that closed a "chapter of seven years of division".Hamas television referred to Haniyeh as a "former prime minister", in deference to the current West Bank-based holder of the post, Rami Al-Hamdallah.But in his address, Haniyeh spoke of pursuing "resistance by all forms", an apparent reference to actions that include armed conflict with Israel, and he said the unity deal meant that Hamas's militia, the Qassam Brigades, "became an army today."Prime Minister Binyamin Netanyahu warned the international community that recognition of the Fatah-Hamas unity government would only strengthen terrorism and increase the likelihood of terror attacks.“The Islamic terror is raising its head in Europe.The last expression of this was the murders in Brussels [last month],” Netanyahu told the Foreign Affairs and Defense Committee in the Knesset.“It’s strange that European governments, who strongly condemned the shooting attack in Brussels, at the same time speak kindly, and even with friendliness of the unity agreement with Hamas, a terrorist organization that carries out and praises such attacks,” Netanyahu said.“The policy has to be against terrorism and against partnership with terrorism,” Netanyahu said.“This kind of thing doesn’t strengthen peace it strengths terror,” he said."Even if we return to '67 borders and dismantle all the settlements, the conflict with the Palestinians will not end, because the root of the conflict is in their unwillingness to recognize the Jewish nation-state," Netanyahu posited.On Sunday, Netanyahu called an emergency cabinet meeting a night ahead of the Fatah-Hamas formal unity government declaration.
During the cabinet meeting, the ministers agreed to completely halt negotiations with the Palestinian Authority as long as it remains united with terror organization Hamas and to lower the amount of  money transferred to the PA.US Secretary of State John Kerry, who spearheaded the peace efforts that collapsed when the unity deal was signed in April, spoke by telephone with Abbas on Sunday and voiced his concern about Hamas's role in the government, State Department spokeswoman Jen Psaki said.Israel, the United States and the European Union regard Hamas as a terrorist group over its refusal to recognize Israel, accept existing interim Israeli-Palestinian peace deals and renounce violence.In his telephone call, Kerry stressed the importance of the new government committing to those principles, Psaki said."The Secretary stated that the United States would monitor the situation closely and judge any government based on its composition, policies, and actions," she added.Reuters and Jpost.com staff contributed to this report.