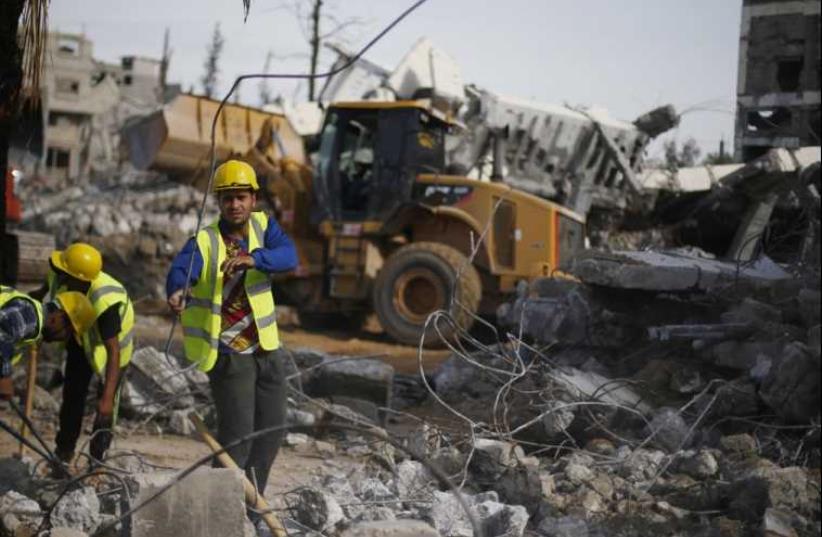 Clearing the rubble east of Gaza City
(photo credit: SUHAIB SALEM / REUTERS)
Advertisement
A Salafi jihadist group on Monday accused Hamas of demolishing a mosque in the Gaza Strip.The group, which is affiliated with the Islamic State terrorist organization, said that the demolition of the mosque in Deir el-Balah took place on Sunday night.The mosque had been frequented by supporters of the Salafi jihadi group, which is called Ansar al-Dawleh al-Islamiyeh (Supporters of the Islamic State).“The gangs of the Hamas regime destroyed the Mutahabin Mosque in a way similar to what the Jewish and American occupation do,” the group said in a statement.It said that three bulldozers took part in the demolition of the small mosque.“In the face of this new Hamas encroachment, we renew our allegiance to (Islamic State) Caliph Abu Bakr al-Baghdadi, may Allah protect him,” the group said.Hamas did not comment on the charges. However, sources close to Hamas denied the charges, saying the structure that was bulldozed was not a mosque but an office that served as a meeting place for the jihadists.The demolition of the mosque comes amid growing tensions between Hamas and Islamic State-affiliated groups in the Gaza Strip.In recent weeks, Hamas authorities arrested several supporters of the Salafi jihadi groups.Following the arrests, the group issued a statement threatening a number of Hamas security officers in the Gaza Strip. The group also published the names and photos of some of the security officers.