One Israeli found dead, one hurt after Istanbul club attack that killed 39

One assailant shot a police officer and a civilian as he entered the Reina nightclub before opening fire at random inside.

By HERB KEINON, REUTERS
JANUARY 1, 2017 13:11
39 killed in Istanbul nightclub attack
Advertisement
One Israeli woman was killed, and another wounded, when a terrorist opened fire on New Year’s revelers at a packed nightclub on the shores of Istanbul’s Bosphorus waterway early Sunday morning, killing at least 39 people, including 16 foreigners.Eighteen-year-old Lian Nasser, from Tira, was killed in the attack. Nasser was on a vacation in Istanbul with three friends.In confirming the death, Foreign Ministry spokesman Emmanuel Nachshon tweeted that Nasser was a “victim of blind hatred and fanaticism.” 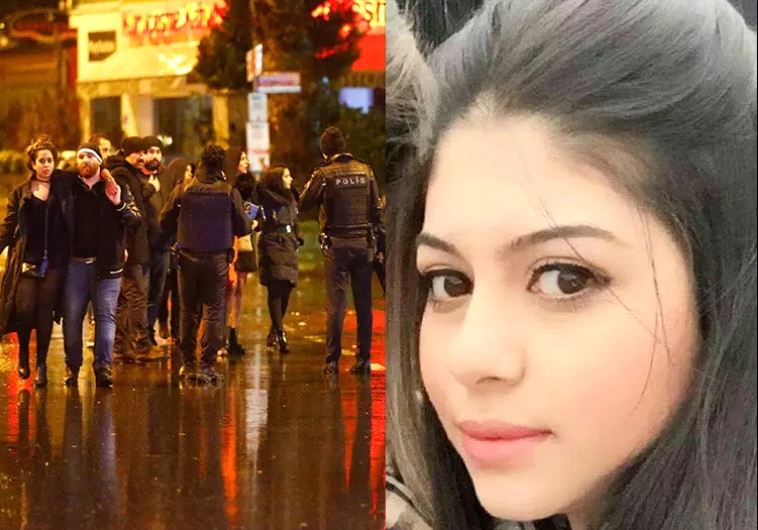 Lian Nasser (photo credit: Courtesy, REUTERS)Another 22-year-old Tira woman was shot in the hand and leg, and is receiving treatment in an Istanbul hospital.The father of the injured Israeli said his daughter sustained two gunshot wounds and that as of Sunday morning she was in “good condition” following surgery.He added that the family was told that their daughter was expected to remain hospitalized for about four days until her condition stabilizes, at which point her transfer to Israel will be permitted.The National Security Council’s Counter-Terror Bureau has a standing advisory against traveling to Turkey. The travel advisory on the bureau’s website calls for Israelis to refrain from visiting Turkey, and for those there to leave as soon as possible. The warning advises Israelis currently in Turkey to refrain from going to crowded tourist sites, and to listen to the directives of the local security authorities and the media.Nasser was the second Israeli to be killed abroad in terrorist attacks in the last two weeks.Dalia Elyakim was killed in Berlin two weeks ago in a truck ramming attack at a Christmas market, and her husband, Rami, was seriously wounded.Rami remains in a Berlin hospital, and on Saturday began to regain consciousness from a medically induced coma.Prime Minister Benjamin Netanyahu said at the opening of Sunday’s cabinet meeting that the attack in Istanbul is another example of the extremist Islamic terrorism that is the “biggest threat to the world.”He repeated a message he has been articulating for years, that the struggle against terrorism is an “international struggle.” Netanyahu quoted German Chancellor Angela Merkel who said over the weekend “what we have been saying for years – that the biggest threat to the future of the world is from extremist Islamic terror.”Netanyahu sent his condolences to the families of the victims of the Istanbul attack, and his wishes for a speedy recovery to those wounded.President Reuven Rivlin also relayed his sympathies to the Turkish people.Nasser’s family on Sunday turned to the ZAKA rescue and recovery organization for help in bringing Lian’s body back to Israel for burial, because she was not insured, and returning the body is both an expensive and logistically complex procedure.A ZAKA representative said the organization accepted the request, and a delegation from the organization will set out to Istanbul to hasten the return of the body for burial.“ZAKA is an international humanitarian organization that honors the dead, regardless of religion, race or gender,” said ZAKA chairman Yehuda Meshi-Zahav. “We will work on all levels to make sure that the body is brought home for burial in Israel as soon as possible.”The Istanbul attack took place in the Reina nightclub about an hour into the new year, with a gunman opening fire at random. Some people jumped into the Bosphorus waters to save themselves.Officials spoke of a single attacker but some reports, including on social media, suggested there may have been more.The attack shook NATO member Turkey as it tries to recover from a failed July coup and a series of deadly bombings in cities including Istanbul and Ankara, some blamed on Islamic State and others claimed by Kurdish militants.Security services had been on alert across Europe for New Year’s celebrations following the Christmas market attack in Berlin that killed 12 people and wounded 56 others. Only days ago, an online message from a pro-Islamic State group called for attacks by “lone wolves” on “celebrations, gatherings and clubs.”The Hurriyet newspaper cited witnesses as saying the attackers shouted in Arabic as they opened fire at Reina.“We were having fun. All of a sudden people started to run. My husband said don’t be afraid, and he jumped on me. People ran over me. My husband was hit in three places,” one club-goer, Sinem Uyanik, told the newspaper.“I managed to push through and get out, it was terrible,” she said, describing seeing people soaked in blood.The incident bore echoes of an attack by Islamists on Paris’s Bataclan music hall in November 2015 that, along with assaults on bars and restaurants, killed 130 people.Interior Minister Suleyman Soylu said, “A manhunt for the terrorist is under way.”Among the other foreign nationals killed in the attack were citizens of Saudi Arabia, Morocco, Lebanon, Libya and Belgium. France said three of its citizens were wounded.“As a nation, we will fight to the end against not just the armed attacks of terror groups, but also against their economic, political and social attacks,” President Recep Tayyip Erdogan said in a written statement. “They are trying to create chaos, demoralize our people, and destabilize our country... We will retain our cool-headedness as a nation, standing more closely together, and we will never give ground to such dirty games,” he said.There has been no claim of responsibility, but Erdogan linked the attacks to developments in the region where Turkey faces conflict across its frontier in Syria and Iraq.Some three million Syrian refugees currently live on Turkish soil.The Reina club is one of Istanbul’s best known nightspots, popular with locals and foreigners. Some 600 people were thought to have been inside when the gunman shot dead a policeman and civilian at the door, forced his