This is not the first time reports have been received regarding Israeli attacks on Hezbollah weapons convoys. 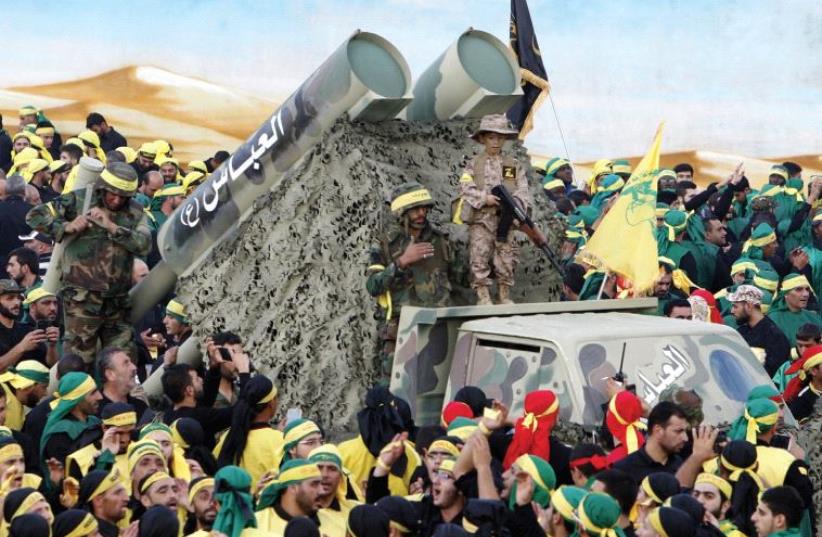 HEZBOLLAH MEMBERS, supporters and relatives attend the funeral of three Hezbollah fighters who were killed fighting alongside the Syrian Army last year. (
(photo credit: REUTERS)
Twice in the past week, Syria has reported an Israeli attack on military targets in the Damascus region, around 25 kilometers from the Lebanese border and approximately 50 kilometers from the border with Israel.During the first attack, a truck convoy on the Beirut-Damascus Highway that, according to the news reports, was transporting weaponry or even rockets from Syria to Lebanon, and a Syrian army arms cache were hit. A week later, an apparent arms cache was targeted at the Mazzeh Military Airport, and the ammunition caused secondary explosions that were heard and seen for many hours throughout the region.The Al-Jazeera TV station even reported that the weaponry at Mazzeh included barrel bombs, similar to those used by the regime against the rebels. It is unclear whether anyone was hurt in the two attacks.This is not the first time reports have been received regarding Israeli attacks on Hezbollah weapons convoy and arms caches in Syria, aiming to thwart the transfer of Syrian weaponry to Hezbollah in Lebanon. Up until approximately a year ago, Hezbollah even tried to create a tit-for-tat equation for some of these attacks; however the IDF’s tough and cautious policy has apparently caused it to reconsider.The number of attacks against Hezbollah’s arms convoys and caches has dwindled over the past year, and it was assumed that this was a consequence of the Russian presence in the area, including the positioning in Syria of advanced air defense systems and later the arrival of the Russian aircraft carrier and missile boats to the Mediterranean Sea.This latest incident, however, was irregular in several respects, including the non-kinetic way in which the sides are conducting themselves: Hezbollah and Syria have clearly laid the blame for the attacks on Israel. That was followed by announcements by Defense Minister Avigdor Liberman, who clarified that although Israel has no interest in intervening in Syria’s civil war, it acts to preserve its citizens’ security and protect its sovereignty, and attempts to prevent the transfer of smart weapons, military equipment and weapons of mass destruction from Syria to Hezbollah.Liberman emphasized that this is Israel’s policy and Israel “will make decisions according to this policy without taking other circumstances or restrictions into account.” The IDF generally refrains from referring, or even hinting, to these attacks, and reference to Israel’s red lines by political ranks in the past was only general.The statement that Israel will not take restrictions into account is presumably intended to refute the premise that the Russian presence prevents the IDF from acting freely. The two most recent attacks, if they were indeed carried out by Israel, prove that the coordination mechanism between the two countries is working at the highest levels. This is manifested, among other things, by the many visits of the highest Israeli echelons to Moscow. Senior officials in the Israel Air Force have even clarified that Israel understands that the anti-aircraft weapons that Russia has positioned in Syria are not directed at Israel and, therefore, the IAF “flies [regardless of] their presence.”However, this is not the end of the story.At the same time, and seemingly not coincidentally, the IDF published – in English – a map of Hezbollah’s military infrastructure in Lebanon – marking 10,000 structures and underground positions the IDF has identified in recent years. The map’s publication on the morning of the second attack was intended to serve as a message not only to the international community, but also to Hezbollah leader Hassan Nasrallah, as part of the efforts to discourage the Shi’ite alliance from retaliating over the attacks in Syria.The IDF and Hezbollah have been waging this type of psychological war for years. Hezbollah repeatedly threatens that it has new abilities to attack Israel, including occupying communities or IDF posts close to the border and firing rockets at Haifa’s ammonia tanks.On the other hand, the IDF reveals that it knows where Hezbollah’s “capabilities” lie, and that everyone knows their location is a breach of international law.As part of this strategy, the IDF has published video clips of Hezbollah depicting its clearing of arms caches inside villages that exploded as the result of accidents, maps and aerial photographs of Hezbollah’s deployment in villages in southern Lebanon and much more.After the civil war broke out in Syria, Israel sought to emphasize that despite the sending of Lebanese manpower to aid the war in Syria, the supply of Syrian weaponry to Hezbollah in Lebanon has not stopped.Incidentally, Israel takes Hezbollah’s threats very seriously. Along the border with Lebanon, one can see the fortifications the IDF has built to protect the border communities and farmers.Reports are constantly published in Israel regarding the Home Front’s readiness for rocket attacks, and the IDF frequently holds training exercises for such scenarios.During a week when Syrian President Bashar Assad’s regime is about to emerge victorious in Aleppo, and the confidence among the Shi’ite alliance is on the rise, one might ask how the Shi’ite leaders will choose to react.Will they not respond to the incidents and focus on northern Syria? Will they respond in a way that in their assessment will deter Israel from keeping to its red lines and allow them to continue transferring weaponry to Lebanon? Or will they respond mildly, merely to transmit the message that every Israeli action will be met with retaliation, or in other words, return to last year’s equation of action-reaction? The last two options might, in certain scenarios, lead to regional escalation.The author, a major in the IDF reserves, served for 15 years in the military specializing in intelligence and holds an MA in Middle East studies from Ben-Gurion University. She is the founder and CEO of Alma, an organization specializing in research and analysis of Israel’s security challenges on the northern border.