“Elements in the region are not sure which side the US is on, whether it is with the Sunni camp or the radical Shi’ite camp,” Ya’alon said. 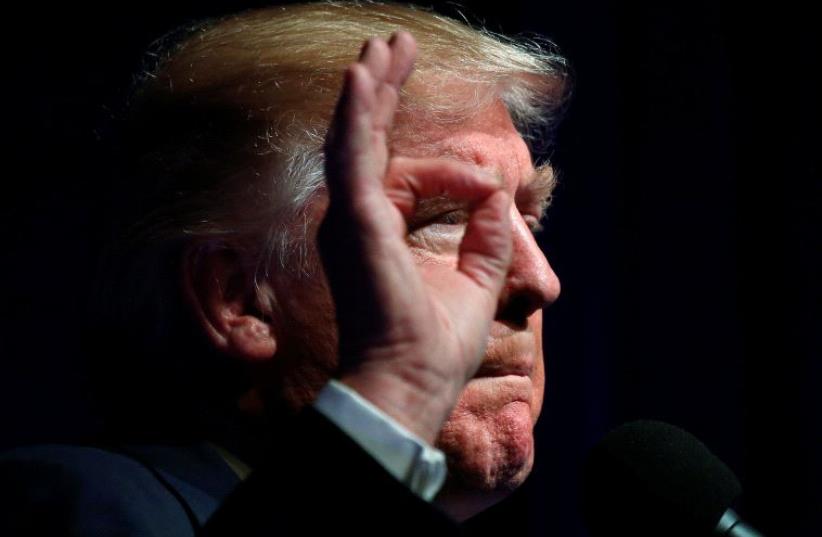 Republican presidential nominee Donald Trump attends a campaign rally in Scranton, Pennsylvania, US November 7, 2016
(photo credit: REUTERS)
The rise of Iranian hegemony in the Middle East, the strengthening of the Muslim Brotherhood, and the growth of Islamic State from Baghdad to Damascus, and from Lebanon to Yemen, are the direct result of waning US influence under the Obama administration, noted former defense minister Moshe Ya’alon at the Jerusalem Post Diplomatic Conference on Monday.“Elements in the region are not sure which side the US is on, whether it is with the Sunni camp or the radical Shi’ite camp,” Ya’alon said.His message was not new. The Obama administration’s foreign policy has been widely criticized, particularly by those on the American Right who are labeled “neocons.” Bret Stephens, the Pulitzer prize winning columnist at The Wall Street Journal and former editorin- chief of The Jerusalem Post, wrote a book about the US’s depleted influence under the Obama administration, titled America in Retreat: The New Isolationism and the Coming Global Disorder. Writers such as Lee Smith have written of the end of “Pax Americana.”What was new was Ya’alon’s call for the incoming Trump administration to turn around US foreign policy in the Middle East. Apparently, Ya’alon would like to see the US take a more active role in confronting Iran and ISIS and intervening in Syria.However, the Trump administration hardly seems poised to make a new start in the Middle East. Judging from his campaign statements, Trump is more interested in focusing on domestic policy, which is in line with the more isolationist position held by traditional conservatives. This position deviates sharply from the neocon position calling for more US intervention abroad. Trump’s “Make America Great Again” begins at home.One of the reasons for Trump’s popularity is the desire on the part of a large segment of the American public to remain out of the Middle East as much as possible.If Trump is determined to distance himself from his predecessor’s Middle East policies, it is reasonable to assume that resuming the stalled diplomatic process between Israel and the Palestinians will not be high on his agenda.Indeed, while Ya’alon might disagree, many on the Right in Israel see a blessing in Trump’s rise to power, since his noninvolvement is likely to give Israel more maneuverability in dealing with the Palestinians.Ya’alon should be careful what he asks for. Does he truly want the involvement of Trump, who just days after winning the US presidential race seemed to liken solving the Israeli-Palestinian conflict to a major real estate deal? This hardly reflects a deep understanding of the issues.In a meeting with writers and editors from The New York Times, Trump said that his Jewish son-in-law, Jared Kushner, could help broker a deal between Israelis and Palestinians.“Well, I think he’d be very good at it. I mean he knows it so well. He knows the region, knows the people, knows the players.”Trump does seem to have sympathy for Israel’s position vis-a-vis the Palestinians. He has expressed his intention to move the US Embassy to Jerusalem and he purportedly agrees with Israel’s position that settlements are not an obstacle to peace.But Trump is unpredictable. He has said, for instance, that he intends to be “neutral” with regard to the Israeli- Palestinian conflict. But in a speech before AIPAC he said, “When I become president, the days of treating Israel like a second-class citizen will end on day one.”He has also flip-flopped on issues such as the use of torture, abortion and immigration. How he will act toward Israel in the event of renewed negotiations is therefore unknown.Admittedly, it will be difficult for Trump to remain out of the Middle East altogether. The region has a way of imposing itself on US presidents by presenting challenges such the proliferation of weapons and terrorism. Trouble that originates from the Middle East has a tendency to spread.Trump might have pledged “America first,” but he will have a hard time keeping up to that promise. Should we welcome this intervention as Ya’alon seems to be suggesting? We are not sure.