It is part of the price, some have said, for the territories. 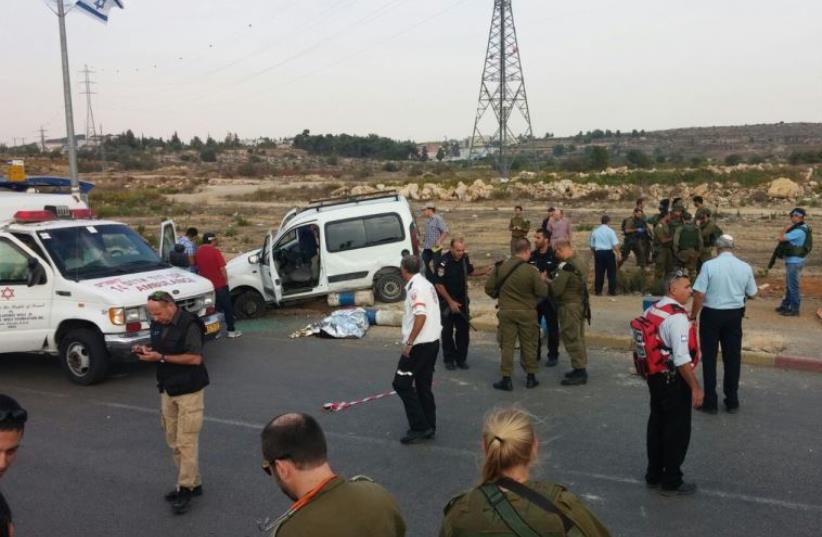 Scene of vehicular terror attack at Gush Etzion Junction, October 20, 2015
(photo credit: GUSH ETZION REGIONAL COUNCIL)
Advertisement
The purpose of terrorism, Vladimir Lenin said, is to terrorize. Political or, in our case, religiously inspired violence aims to create an atmosphere of terror, to immobilize the populace by making people so afraid that they can no longer act rationally. In its ultimate extent, terror is so blinding that it becomes morally incapacitating, such that one cannot differentiate between a terrorist enemy and an innocent bystander.For terrorism to succeed, it must deeply penetrate the public consciousness on two levels. One is the rational fear of an ever-present external threat to our lives posed by terrorists, which demands constant vigilance. But there is also another fear posed by an internal threat, which emerges when the terror has been deeply internalized. Terrorism succeeds when it turns victims into victimizers – for example, when it feeds on the ultra-nationalism of a growing number of Jewish extremists who have murdered Arabs and are now attacking Jews whom they regard as traitors.Successful terrorism brings normal life to a halt as the constant pressure of pervasive danger wears down resistance.Such tension has made people edgy to the extent that there have been days when everyone seemed to be staying home. In one horrifying incident in Beersheba, fear and panic took over, as people struck out blindly, mistaking an innocent victim for a terrorist.But is this terrorism different from all other terrorism we have known? According to the National Insurance Institute, from 1920 through 2014, a total of 3,782 Jewish residents of our country were killed by terrorists. In all those 95 years, however, 1,282 victims of terrorism – more than a third of the total – were slain since September 2000.Beginning with the second intifada, Israel has faced an onslaught of terrorist violence that has been more lethal than in any similar period during the past century. But this grim parade of casualties has failed to terrorize us. Since 1948 we have become inured to fighting for our survival, whether against foreign armies or legions of suicide bombers.It is part of the price, some have said, for the territories.The maxim of “ein breira,” there is no choice, guides our resistance – just as it did in times of total war and as it does today in our war against terrorism. Mostly we refuse to give in to terror, but there have been frightful lapses in our self-restraint under adversity that constitute small victories for a terrorism that seeks to strip us of our humanity.It is acknowledged by our security services that Jewish terrorists were responsible for the firebombing murders of the Dawabsha family of Duma last summer. No suspects have been arrested in the attack – although the authorities say they know who perpetrated it.The arson attack was not a spontaneous response to an assault in progress, but a planned act of revenge. In a second grisly attack, Jewish terrorists kidnapped and burned alive 16-year-old Muhammad Abu Khdeir in supposed retaliation for the kidnapping and murder of Jewish teens Eyal Yifrah, Gil-Ad Shaer and Naftali Fraenkel by Hamas.In countless so-called “price tag” attacks Jewish extremists have defaced and destroyed Arab property with impunity, including the arson of the Church of the Loaves and Fishes at the Sea of Galilee.The concept that “Not only must justice be done; it must also be seen to be done” has been sorely lacking under the present government. This is shamefully obvious in the official response to the persecution of Palestinian farmers by settlers, who deny them access to their farmland under the watchful eyes of nonintervening IDF troops.These settlers are motivated by a distortion of Jewish nationalism that recognizes no Palestinian property rights, but also borders on denying basic human rights. Witness the so-called Torah “sages” who produced the tract Torat Hamelech (“The King’s Torah”), which justifies killing Arab children for fear they could grow up to become terrorists.When rabbis quote sacred texts to support the murder of infants, it is time for a wake-up call.When those who express their love for the Torah and the Land of Israel by destroying other people’s olive trees, under a supposedly halachic rationale, we must realize that the scourge of terrorism is indeed on the brink of terrorizing our society.A clear sign of imminent danger was given last Friday, when Rabbi Arik Ascherman, founder and leader of Rabbis for Human Rights, was attacked by a knife-wielding settler near Itamar, while helping to put out a fire set in a Palestinian olive grove. Luckily he was unhurt, in an assault apparently meant as a warning. It is a warning we all must heed.