A future Palestinian state will have Islam as the dominant aspect of its governing system, despite Western wishful thinking to the contrary. 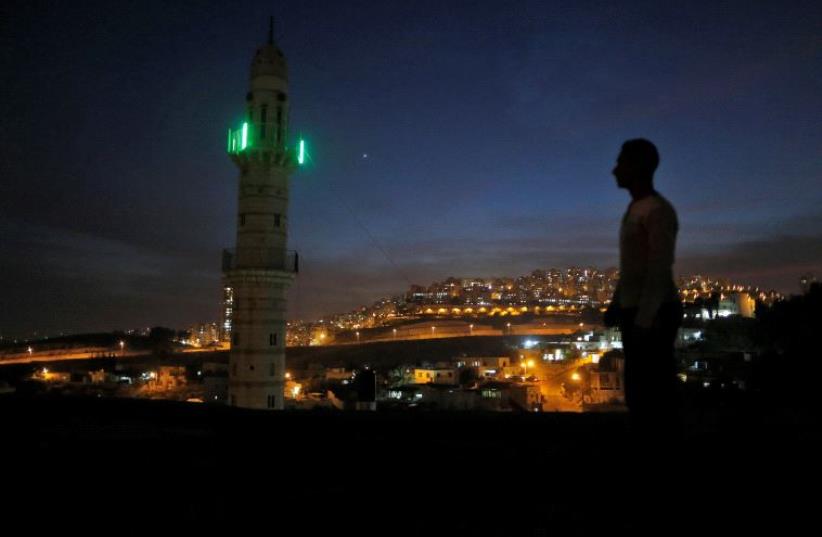 A man stands near a mosque opposite to a neighborhood in east Jerusalem November 13, 2016.
(photo credit: REUTERS)
Advertisement
Every few years, like clockwork an American administration comes along that thinks it can solve the Israeli-Palestinian conflict, while politicians and pundits annually march through the halls of the AIPAC national meeting talking about a two-state solution with security for Israel. Their motivations are genuine, but they can’t seem to learn the lessons of previous failures. This is especially important now, as US President Donald Trump seems bent on solving this heretofore- intractable conflict.To many Americans, Jews and Arabs are simply fighting over territory, so the logical answer is to simply divide the land. This has been the strategy for over 100 years. But this approach ignores the fact that this dispute, like so many others in the Middle East, is primarily a war of Islamic religious supremacy.The path to peace is not one a cartographer can delineate. We need to understand the ideological reasons why simply dividing the land has received consistently negative Palestinian responses despite offers of 100% of the territory, with land swaps. Until that understanding takes hold in the Western diplomatic mind, negotiations will continue to fail, promises will continue to be broken and violence will continue to follow.As Anshel Pfeffer wrote in The Guardian a few years back, “Accepting that the Israel-Palestine conflict is also a bitter religious war runs counter to the international community’s preferred solutions... which is a central reason that none of these solutions have worked.”America for decades has refused to recognize the obvious: in the Muslim and Arab world decisions are not based on Western democratic standards.There are no secular Arab states. In the Arab world there is no separation of church and state. The last secular Muslim state, Turkey, has become Islamized over the past 14 years.A future Palestinian state will have Islam as the dominant aspect of its governing system, despite Western wishful thinking to the contrary.Hamas is an Islamist regime that bases its desire to destroy Israel on Islamic texts and the Muslim Brotherhood interpretation of a worldwide caliphate.But is today’s Palestinian Authority really so secular compared to Hamas, as the UN, EU and the US State Department claim? If you examine statements by PA political and religious leaders, and from its state-sponsored television, the reality is quite different.To counter Hamas’ popularity, the PA has Islamized the conflict over the past 20 years. Secular PA President Mahmoud Abbas speaks of jihad and Jews overtaking al-Aksa Mosque, with the aim of motivating and enrage Palestinians, deflecting attention from the failings and corruption of the PA .In 1979 the Iranian revolution showed both Sunnis and Shi’ites that Islamism, not secular Muslim nationalism, is the winning formula. Over time, the corruption of the secular PLO /PA /Fatah and their failure to end the “occupation” of Muslim lands all combined to transform secular Palestinian society toward Islamist nationalism.According to Palestinian Media Watch, the PA preaches “Ribat, an uncompromising Islamic obligation... to liberate land said to be Islamic.Israel is considered to be Islamic land that must be liberated for Allah... The tragic conclusion is that the Palestinian Authority has adopted and is teaching its people the messages of radical Islam.”President Abbas appointed Sheikh Muhammad Hussein as mufti, the most senior religious leader in the PA.Hussein said, “The land of Palestine is Wakf. It must not be relinquished nor must any part of it be sold... It is the duty of the leaders of the [Islamic] nation and its peoples to liberate Palestine and Jerusalem.”Bewilderingly, the Trump administration may also be approaching the Israeli-Palestinian conflict emphasizing the territorial aspects while sidelining the primary Islamic root cause of the conflict.When speaking to the West, the Palestinians have perfected the art of doublespeak, telling Americans that if only Israel returns the stolen land over the “67 border” all will be well, as the conflict is just about territory.Trump refers to “a great real-estate deal” between Israel and the Palestinians.But you cannot have an “ultimate deal” if you don’t factor in the primary Islamic roots of the conflict which animate Palestinian Arab choices.Both the PA and Hamas’ lack of acceptance of Israel as a Jewish state and denial of Zionism as a legitimate national movement are based on Islamic beliefs. Hamas states this clearly. But the West closes its eyes to the Islamist nature of the PA , PLO and Fatah, claiming they are strictly secular movements.The PA ’s children’s TV programs teach that Jews are “Allah’s enemies – sons of pigs,” or “Oh, you who murdered Allah’s pious prophets,” or “as long as my heart is my Koran and my city... [Jerusalem] is the eternal capital of Palestine.”If you are really serious about resolving the Israeli-Palestinian conflict, for the sake of the parties involved, and for the security and interests of America and its allies you must acknowledge that Palestinian Arab decisions are judged through the lens of Islamic law, history and tradition.The author is the founder and director of MEPIN, the Middle East Political and Information Network. He regularly briefs members of Congress and think tanks on the Middle East.