The Women’s March on Washington: It doesn't end here

I’ve never seen anything like this in my life, and I’m not a stranger to political rallies.

By JOAN MARCUS
JANUARY 22, 2017 10:58
Half million people join Women's March in Washington DC
The Women’s March on Washington came at an inconvenient time for me. The college where I teach begins its semester in two days. Honestly, it would have made a lot more sense for me to stay at home and attend the local protest in my upstate New York town. But my husband and I felt compelled to take our teenage daughters to D.C. because it seemed like the only thing to do in light of the election. A man with no political experience whatsoever, an admitted sex offender who’s been gaming the system his whole life and whose conflicts of interest are so egregious he’s in direct violation of the constitution as we speak, has bested the most supremely qualified woman in the nation despite her huge lead in the popular vote. How can we help our daughters through this and teach them to be strong? The Women’s March on Washington seemed like a start. Still I wanted to protect my girls. I worried they’d be harassed on the subway by counter-demonstrators, so I asked them to carry their signs in a garbage bag. This turned out to be entirely unnecessary. From the moment we left our lodgings in suburban Maryland early on the morning of the march, we encountered nothing but support and solidarity. The crowds were massive — there were easily a thousand people waiting for the escalator at the downtown Bethesda metro and we were forced to walk a mile to a different subway stop. Even here the trains were packed – there was barely room to breathe -- but everyone was remarkably cheerful and accommodating. 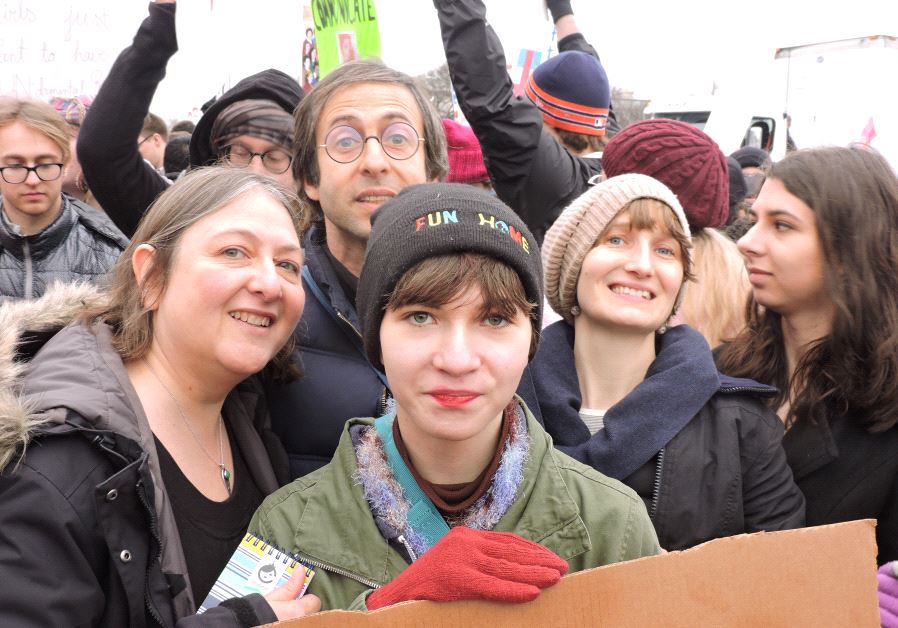 Joan Marcus and her daughters at the Women's March in Washington D.C. (Roger Hecht)We got off the train in Chinatown, flowed down 7th street in tight-packed foot traffic and made our way across the Mall. The crowds were so thick that it was hard to move forward, but eventually we made it to Independence Avenue where we were able to hear some of the speakers — Tammy Duckworth and Scarlett Johansson and, best of all, six-year-old immigrant activist Sophie Cruz with her clear, pure voice. By 2:00 pm the crowd began marching toward the Ellipse between the Washington Monument and the White House, but there were so many people that it wasn’t really a march, more like lava flowing slowly from many directions. I’ve never seen anything like this in my life, and I’m not a stranger to political rallies. The sheer numbers, the positivity and goodwill and humor, completely exceeded my expectations. “But do you think it’ll help?” my older daughter asked. By itself, maybe not, I told her. But if it doesn’t end here, if it’s the start of a focused movement to hold our representatives accountable, then yes, maybe it will.