In Miami, Trump supporters accuse press of selling out 'for a few shekels'

Clad in "Make America Great Again!" gear, the vocal supporter was flanked by several others who appeared to support his statements. 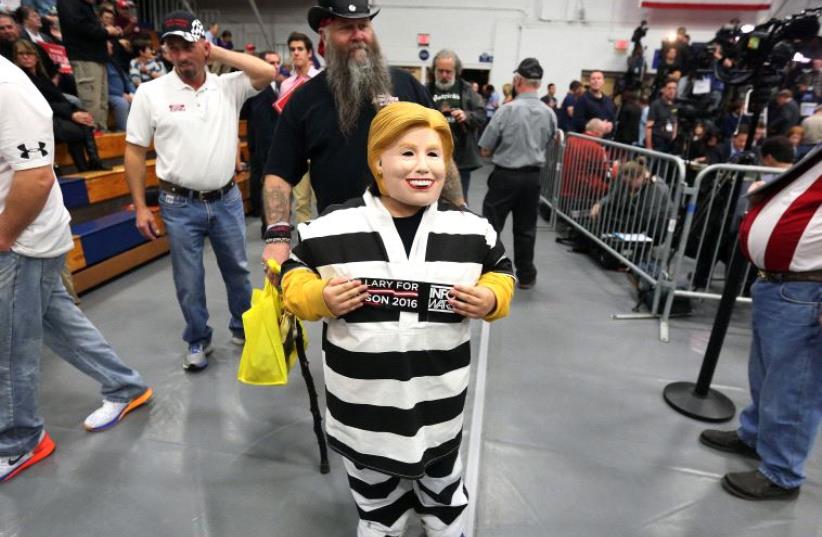 A child wears a Hillary Clinton costume before Republican presidential nominee Donald Trump holds a campaign event
(photo credit: REUTERS)
Advertisement
WASHINGTON -- Supporters of Donald Trump rallying in Miami heckled reporters on Wednesday with anti-Semitic taunts, accusing them of selling out "for a few shekels" and being an embarrassment to the journalistic profession.

Man shouts at press for selling out "for a few shekels" at Trump rally in Miami pic.twitter.com/f4MApeMgxa
— Shane Goldmacher (@ShaneGoldmacher) November 2, 2016

Clad in "Make America Great Again!" gear, the vocal supporter was flanked by several others who appeared to support his statements. Anti-Semitic epithets have become a common occurrence at Trump rallies. Last week, one supporter in Arizona turned to the media and chanted "Jew-S-A." Swastika signs have repeatedly been left in media pens along the GOP nominee's campaign trail, and last month, a Nazi slur, "Lügenpresse," meaning "lying press," was shouted at another Trump event in Ohio."You're a shame to your profession," the Trump supporter repeated. "You sell out for a few shekels. For a few shekels, you sell out."Trump himself has warned of a vast conspiracy, orchestrated by "the media" and "international bankers," intended to rig the election in favor of his opponent, Democratic presidential nominee Hillary Clinton.