Ron Dermer, Israel's Ambassador to the US speaks to members of the news media after meeting with then-President Elect Donald Trump at Trump Tower in the Manhattan borough of New York City, US, November 17, 2016.
(photo credit: REUTERS)
Advertisement
WASHINGTON – Ambassador to Washington Ron Dermer informed a senior White House official at former president Barack Obama’s final White House Hanukka party that he would be forced to reach out to President-elect Donald Trump’s transition team for help if the UN Security Council went ahead with a landmark resolution condemning Israeli settlement activity.The December 14, 2016, exchange – a climactic moment in the final chapter of a hostile relationship between Prime Minister Benjamin Netanyahu’s government and the Obama administration – has not previously been reported, and may prove critical in an investigation currently under way by Robert Mueller III, the US special counsel investigating contacts between Trump’s presidential campaign and foreign governments.Mueller, according to American press reports, is examining communications between Jared Kushner – then a senior foreign policy adviser to Trump during his transition to the White House – and Israeli government officials who were desperate to stop the resolution from proceeding to a vote. Kushner was Dermer’s point of contact with the transition team.While Kushner was still a private citizen theoretically barred from engaging in efforts to subvert US foreign policy, White House protocol encourages presidential transition teams to engage with foreign dignitaries as they prepare to assume the responsibilities of government.Israel’s clash with the US that December was an exceptional episode, pitting two successive White House administrations against each other over an imminent foreign policy decision. The Obama team was willing to let a condemnatory resolution on Israel pass at the UN in its final days, while the Trump team aggressively opposed the move. 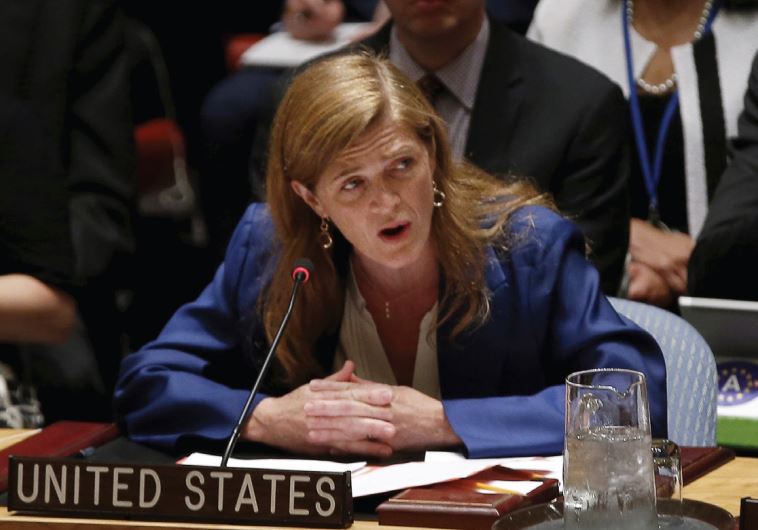 Former US ambassador to the United Nations Samantha Power speaks at the UN headquarters in New York on July 20 (Reuters)
Trump’s efforts to kill the UN measure – including the president-elect’s personal overtures to President Abdel Fattah al-Sisi of Egypt, who originally proposed the resolution, as well as the Trump team’s outreach to Russia, which has veto power at the Security Council – were widely reported at the time. Israel’s effort to encourage Trump to intervene was also extensively reported in the following weeks.The Security Council resolution, numbered 2334, ultimately passed, after the Obama administration declined to veto the measure. Israeli officials claim that Obama lied about his administration’s role in orchestrating passage of the resolution, which characterizes all Israeli construction in east Jerusalem as settlement activity pursued in “flagrant violation” of international law.People with direct knowledge of the exchange confirmed to The Jerusalem Post that the Israeli ambassador informed the Obama administration, on the sidelines of the White House holiday reception, of his intent to reach out to Trump’s team – exactly one week before Egypt introduced its original draft of the resolution in public, which it withdrew one day later on December 22, under intensive pressure from the president-elect. Dermer later said that Israel had proof Obama was working behind the scenes to push the resolution toward a vote.
UN Security Council passes resolution demanding an end to Israeli settlement building
Mueller is investigating Kushner’s contacts with foreign governments unknown or unreported to the White House. It is not clear whether the special counsel’s office is aware of Dermer’s effort to inform the government in power at the time of Israel’s intent to contact the presidential transition team.A spokesman for Kushner’s attorney, Peter Mirijanian, told the Post that, “without commenting on whom he talks with and how he does his work, Mr. Kushner is in conformity with the Presidential Records Act and other rules.” Kushner’s adherence to this law is under scrutiny in light of his use of private email to conduct government business.Ambassador to the UN Danny Danon said last week that he was not personally knowledgeable of or involved with a coordinated effort by Israel and Trump’s transition team to kill the resolution.“I am not knowledgeable [about] what are the rules here in the US,” the ambassador told the Post in an interview. “I don’t know what’s accepted or not accepted in American politics.“But I can tell you,” he continued, “in terms of Israel, we spoke with whomever we could – and we explained to everyone why it is a bad resolution.”The White House declined to comment for this report.Daniel J. Roth contributed to this report from New York.