As confirmation hearing approaches, liberal group urges US citizens to up pressure against David Friedman. 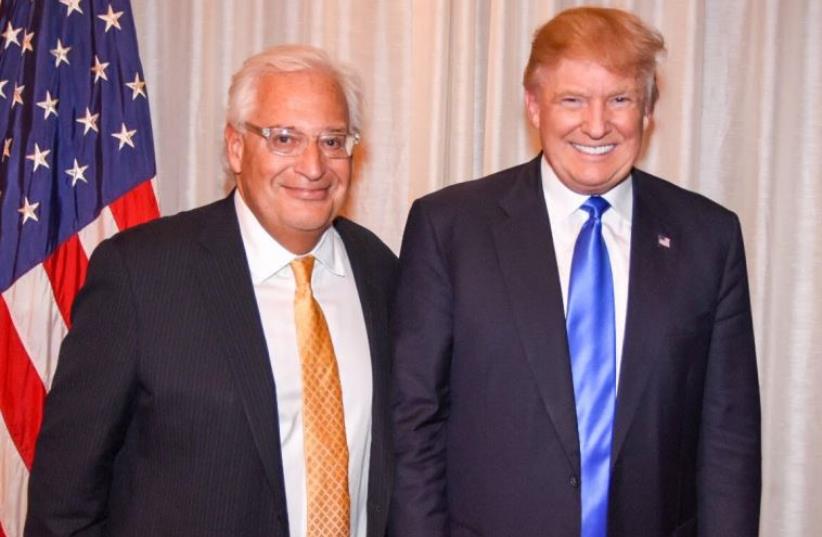 David Friedman with Donald Trump in Manhattan
(photo credit: Courtesy)
Advertisement
Liberal Jewish lobbying group J Street has launched a campaign against David Friedman, US President Donald Trump’s pick to serve as ambassador to Israel.Ahead of Friedman’s confirmation hearing in the Senate Foreign Relations Committee this Thursday, J Street is scrambling to transmit its plea far and wide: “Stop Friedman.”The group is calling on supporters and non-supporters alike to appeal to senators to oppose Friedman’s confirmation, charging that his appointment should alarm all Americans, including those who tend to disagree with J Street.
J Street President Jeremy Ben Ami discusses David Friedman and Trump policy on Israel (credit: TOVAH LAZAROFF)
“David Friedman is a friend of the settlement movement who backs unlimited settlement expansion, has accused [former] president [Barack] Obama of being an antisemite and says that liberal Zionists are ‘worse than kapos,’” the advocacy group stated. J Street supporters were the targets of the latter insult, while members of the Anti-Defamation League were branded by Friedman as “morons.”“The contempt Mr. Friedman has shown toward liberal American Jews – labeling them worse than Nazi collaborators – makes him a horrible choice to be our representative in Israel,” reads a letter drafted by J Street for Friedman opponents to send to their senators.Friedman – who has a long personal history of supporting the settler enterprise – has referred to the two-state solution as a “scam” and “an illusory solution in search of a nonexistent problem.”Friedman served as one of Trump’s two advisers on Israel throughout his presidential campaign. A bankruptcy lawyer, he has no prior experience in diplomacy or governance, another point highlighted by J Street.Following Friedman’s nomination in December, White House chief of staff Reince Priebus responded to questions about his politics by asserting that Friedman would not dictate the direction of the administration’s policy on Israel.Michael Wilner contributed to this report.