The Anti-Defamation League has found itself in combat with the Trump administration on several fronts. 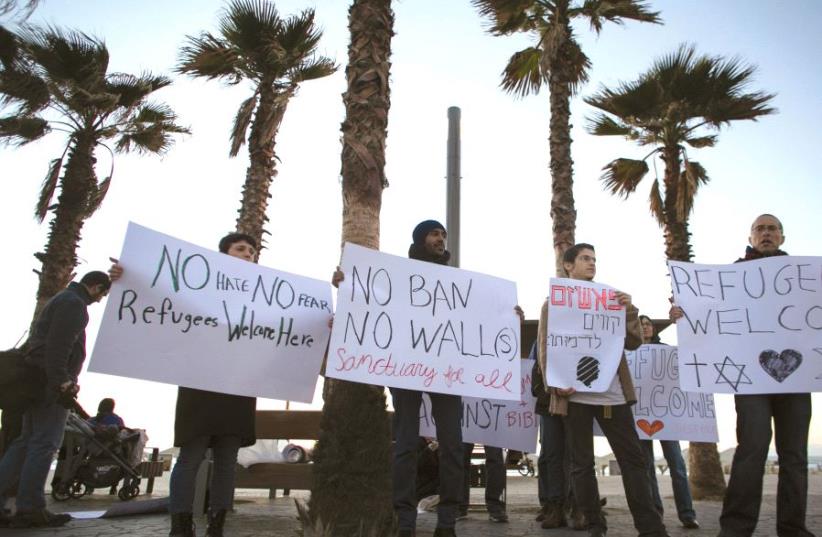 PROTESTERS hold placards during a rally supporting refugees worldwide and in reaction to US President Donald Trump’s travel ban outside the US Embassy in Tel Aviv last month
(photo credit: REUTERS)
Advertisement
American Jewish groups are criticizing the US Supreme Court for its decision to lift an emergency halt of President Donald Trump’s ban on travel to the US for citizens of six Muslim-majority nations.The Anti-Defamation League characterized the decision as “profoundly disappointing.”The court “failed to recognize the plight of the world’s most endangered refugees – those fleeing countries where their lives are in imminent danger,” said Jonathan Greenblatt, chief executive officer of the organization. “We should not turn back the clock to a time when refugees were stopped at our borders and turned away. That is an outmoded and inhumane policy when we know that people are in danger and children are suffering, starving and dying in conflicts overseas.”
Muslim travel ban Trump
The ADL has found itself in combat with the Trump administration on several fronts, but its battle over the president’s refugee ban started the group off on a contentious footing with the administration, which issued an even harsher executive order on travel than the version currently before the courts just a week after Trump took office.“President Trump’s de facto Muslim ban is deeply un-American, violates constitutional principles and undermines our global reputation,” said Rabbi Jack Moline, president of Interfaith Alliance.“The Supreme Court should strike it down in its entirety. Discriminating against millions of people on the basis of their religion does nothing to make Americans safer.”The American Jewish Committee has not commented on the development, which Trump officials are characterizing as a significant victory for national security and for the president. But it did outline its stance just days before the court ruling.“AJC has maintained that the executive order was not sufficiently grounded in real threats to national security to withstand judicial scrutiny,” its leadership stated shortly before the stay was lifted.“The administration appealed to the Supreme Court after lower courts upheld the injunction against implementing the executive order.”Several other, smaller Jewish organizations have voiced disappointment and concern. HIAS – a group primarily devoted to the protection of refugees, which has sued Trump over this matter – called the executive orders “shameful” in a statement on Monday.“For the American Jewish community, this hearkens back to our darkest days of the 1920s to 1940s, when America last broke with its tradition of welcoming refugees by imposing discriminatory and tragic admissions criteria based entirely on where people were born,” the group’s president, Mark Hetfield, said. “The results of those discriminatory laws and policies, particularly for those trying to escape the Nazi genocide in Europe, were tragic.The result of this executive order to allow arbitrary criteria to turn away refugees and other non-citizens will also have tragic results.”Trump argues that the travel ban aggressively targets nations that cannot control their own borders, and cites precedent that has historically given the executive branch near exclusive power over immigration.But critics of the policy point to his rhetoric during the campaign, which characterized Islam as “hating America” and vowed to ban Muslims from entry to the United States.The court will rule on the merits of the case – whether or not the executive order is constitutional – in the fall.