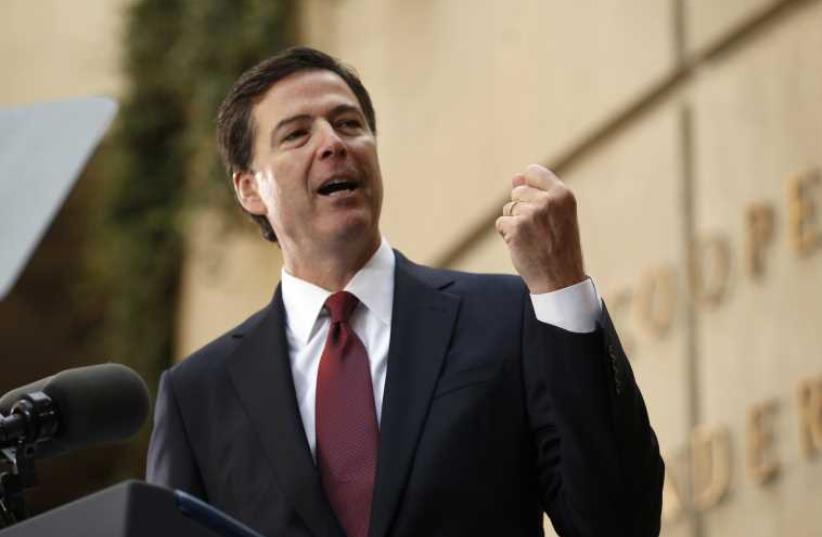 Former FBI Director James Comey
(photo credit: REUTERS)
Advertisement
US President Donald Trump abruptly fired FBI director James Comey after the president's attorney general and deputy attorney general recommended his removal, White House Press Secretary Sean Spicer said on Tuesday night.Spicer said that Comey was "notified a short time ago," but did not provide more details as to the manner in which Comey was notified.CNN reported that the letter of dismissal was hand-delivered to Comey and that the news of the decision to lay off the FBI head were kept under wraps throughout the day, only reaching a select few administration officials. The dismissal took effect immediately and Trump followed with an official statement, saying that "the FBI is one of our nation's most cherished and respected institutions and today will mark a new beginning for our crown jewel of law enforcement." The White House Press Secretary also told reporters that Comey "accepted the recommendation of the deputy general and the attorney general," who both recommended that Trump carry out this highly unusual and unexpected move. "It is essential that we find new leadership for the FBI that restores public trust and confidence in its vital law enforcement mission," Trump said in a letter to Comey released by the White House.Trump also told Comey in the letter he accepted the recommendation of Attorney General Jeff Sessions that "you are not able to effectively lead the bureau."The White House said that a search for a new FBI director will be launched immediately.
FBI Director to Justice Department: Reject Trump"s wiretapping claim (credit: REUTERS)
While the reasoning for Comey's dismissal was not provided, most speculations point to the rift that was created between the president and the former FBI director when an official investigation was opened in July regarding Trump and senior administration officials' alleged ties to the Russian envoy during the elections campaign. Earlier in the year when Trump claimed that his predecessor, former US President Barack Obama, wiretapped his phone conversations Comey reportedly was "bewildered" by the president's allegations and in March asked the latter to refute his claim. Obama appointed Comey in 2013. Comey has been embroiled in controversy surrounding his probe into whether Clinton's use of a private email server while US secretary of state during Obama's first term compromised national security.He said in July that the case should be closed without prosecution, but then declared - 11 days before the Nov. 8 election - that he had reopened the investigation because of a discovery of a new trove of Clinton-related emails.It was a decision Democrats believe cost Clinton victory.The White House released a memo by Deputy Attorney General Rod Rosenstein about Comey's actions."I cannot defend the Director's handling of the conclusion of the investigation of Secretary Clinton's emails, and I do not understand his refusal to accept the nearly universal judgment that he was mistaken," Rosenstein wrote.Rosenstein identified several areas in which he said Comey had erred, saying it was wrong of him to "usurp" then-Attorney General Loretta Lynch's authority by announcing the initial conclusion of the email case on July 5.Comey "announced his own conclusions about the nation's most sensitive criminal investigation, without the authorization of duly appointed Justice Department leaders," Rosenstein wrote. Comey also "ignored another longstanding principle" by holding a news conference to "release derogatory information about the subject of a declined criminal investigation."Comey told the Senate Judiciary Committee last Wednesday it made him "mildly nauseous" to think his announcement of the reopening of an investigation into Clinton's emails affected the 2016 presidential election, but he had no regrets and would make the same decision again.