Getting a seat at the table

The Council of Young Jewish Presidents wants the next generation of philanthropists prepared for the job. 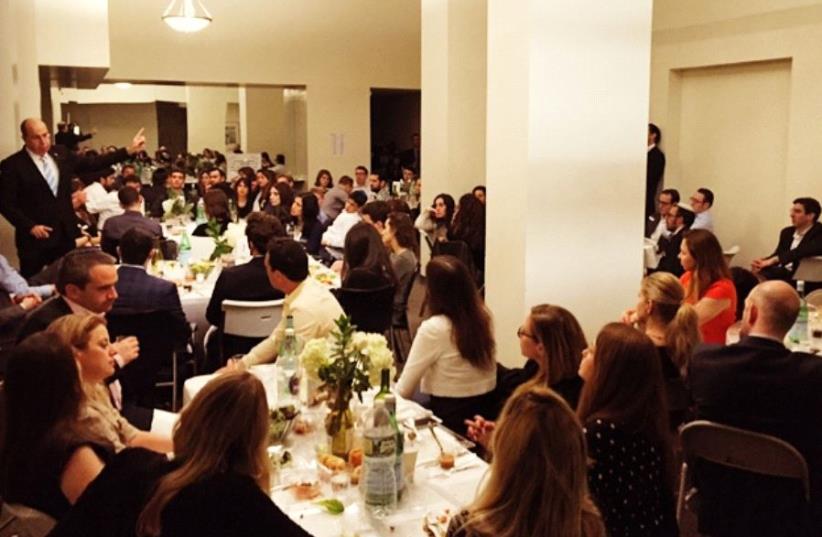 Former Defense Minister Moshe Ya'alon speaks to Council of Young Jewish Presidents (Courtesy)
(photo credit: COURTESY/COUNCIL OF YOUNG JEWISH PRESIDENTS)
Advertisement
hat will the biggest Jewish nonprofit organizations look like in 10 or 20 years? How will the boards of the UJA, JNF, ADL, AJC, Hadassah and URJ adapt to the changing landscape of Jewish communal life? The Council of Young Jewish Presidents, currently helmed by chairman Michael Littenberg-Brown, aims to make sure that the transition is smooth, and that young Jewish leaders’ voices are heard.“You have people on these boards for 25, 30 years running these major American Jewish organizations,” said Littenberg-Brown. “While that brings a tremendous amount of experience, at the same time the way of doing things becomes fixed around those people’s ideas and experiences.”And even with efforts to change that over the past few years, he said, “there’s still not nearly enough young energy and voices on these leadership boards. In fact, if you look at most of these organizations, I would imagine that the percentages of board members under the age of 40 are quote low.”The problem, Littenberg-Brown said, is “that’s going to make it very difficult for these organizations to weather very changing dynamics in the Jewish community, and weather very changing lines of messaging and policies that are compelling for young people and for the next generation and the generation after that.”CYJP was founded in 2005 by David Borowich-Ya’ari, who was looking to strengthen young Jewish voices in the biggest Jewish organizations.“The Council of Young Jewish Presidents was formed to empower the presidents of young leadership groups to work together and address issues of broad concern to our people,” he said, “and to develop the skills and understanding to advance the next generation of Jewish leaders.”To that end, the organization runs a two-year curriculum to give burgeoning young Jewish leaders the tools and skills needed to make their voices heard. The members are mostly the co-chairmen of organizations’ young leadership committees, as well as “at-large members,” said Littenberg-Brown, “who are basically young people who are running very cool initiatives and programs which are not formal organizations.”The Council of Young Jewish Presidents wants the next generation of philanthropists prepared for the job ‘THE COUNCIL of Young Jewish Presidents was formed to empower the presidents of young leadership groups to work together and address issues of broad concern to our people.’ (Courtesy) The two-year program “opens them up to the core skills that are necessary for people to be effective young leadership board members at their organizations,” he added. It also allows these future leaders to network with one another and build “relationships with other successful young leaders that will help them now and far into the future.”CYJP was born under the Jewish Community Relations Council in New York, and is now affiliated with the UJA-Federation of New York.Hindy Poupko, who previously managed CYJP as part of her role at JCRC, now works as the deputy chief planning officer at UJA-NY.“As UJA-Federation of New York looks to its second century, it is critical to cultivate leaders from our community,” she said. “We are proud to support CYJP in its work nurturing and developing the talents and skills of tomorrow’s leaders in business and Jewish philanthropy.”Littenberg-Brown says one thing the organization focuses on is providing a wide variety of voices that are attuned to the next generation.“We pride ourselves on being a very diverse range of voices in the Jewish community, in terms of the level of religiosity and ethnic background and political viewpoints,” he said.“So we think it’s going to be very important for the next generation of Jewish communal leadership and people who are focusing on supporting Israel to be familiar and comfortable and have access to all those viewpoints.”The CYJP chairman noted that the current political atmosphere is highly charged, which can effect Jewish giving and involvement.“Right now there’s a lot of divisiveness in the Jewish community in many ways... and it’s going to be imperative for the next generation of leaders to understand and have a kind of language on how to serve the community the best.”CYJP is partnered with more than 40 Jewish organizations across the religious and political spectrum, bringing together young leaders of all stripes.Zoya Raynes, a board member and past chair of CYJP, said the organization works to fulfill the “need for our community to truly invest in the current and future leaders within the Jewish community.“CYJP is composed of a diverse and powerful foundation of dozens of leaders, representing a spectrum of organizations that reflect our wonderful and complicated people,” she said.Many of the biggest and oldest Jewish communal organizations have executive boards made up of serious donors, which can be another hurdle for young leaders to cross.CYJP’s efforts are geared toward making those organizations “feel comfortable bringing young people on to their boards who don’t necessarily have huge amounts of wealth today,” said Littenberg-Brown, “but offer very specific amounts of expertise and knowledge, and are going to contribute to the board, even if they’re not the major funders of the board.”Josh Tanenbaum, the vice chairman of CYJP, echoed Littenberg-Brown.“CYJP brings together top young lay leaders and teaches them to do more than write a check,” he said. “It gives them the tools to drive meaningful impact.”