Ross: White House took 'conscious decision to try to distance itself from Israel'

The veteran diplomat, who used the occasion of the conference to promote his latest book, said that Washington has failed to gauge the priorities of Arab regimes. 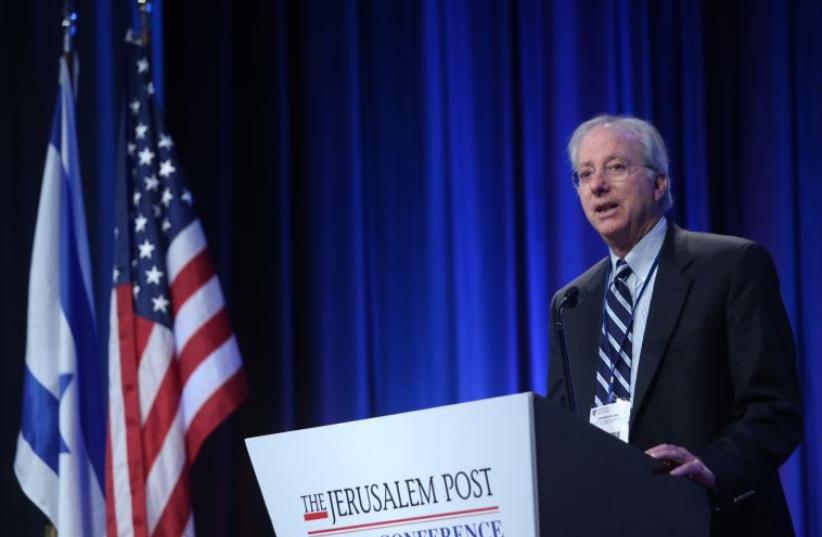 Dennis Ross at JPost Annual Conference
(photo credit: MARC ISRAEL SELLEM)
Advertisement
NEW YORK – Barack Obama is one of five presidents in modern history who has made a “conscious decision to try to distance [himself and his administration] from Israel,” his former aide, Dennis Ross, said on Sunday.Addressing The Jerusalem Post’s annual conference in New York, Ross, a veteran diplomat who has worked on peace negotiations between Israelis and Palestinians under the Reagan, H. W. Bush, Clinton and Obama administrations, said the White House has worked under the assumption that “Israel is more of a problem than it is a partner.”“If you distance yourself from Israel, you’ll gain with the Arabs,” Ross said, summing up the premise of the Obama administration’s policy on the Israeli-Palestinian conflict.But he said the assumption is not unique to this White House as former presidents Eisenhower, Nixon, Carter and H. W. Bush all tried to distance themselves from Israel for the same reason.Ross offered his analysis of the policy approach: “Every administration that has tried to distance itself from Israel has gained nothing,” he said.The diplomat also said the Obama administration worked toward a two-state solution believing it would bring peace to the wider Middle East, but argued that assumption is flawed, as well.“If tomorrow you could solve this issue, it wouldn’t stop one barrel bomb in Syria,” he said. “It wouldn’t change Iran’s ambition in the region. It wouldn’t change the challenges Egypt is facing.”Ross questioned whether a comprehensive peace deal is possible in the current political climate – both in Jerusalem and Ramallah. But he characterized himself as an optimist, and said his recent book, Doomed to Succeed, is intended to educate the next president on the mistakes of past negotiations.