Analysis: Israeli public has accepted the 'routine of terror'

The IDF and Shin Bet's recommendations for a diplomatic initiative or gesture of good will have fallen on deaf ears. 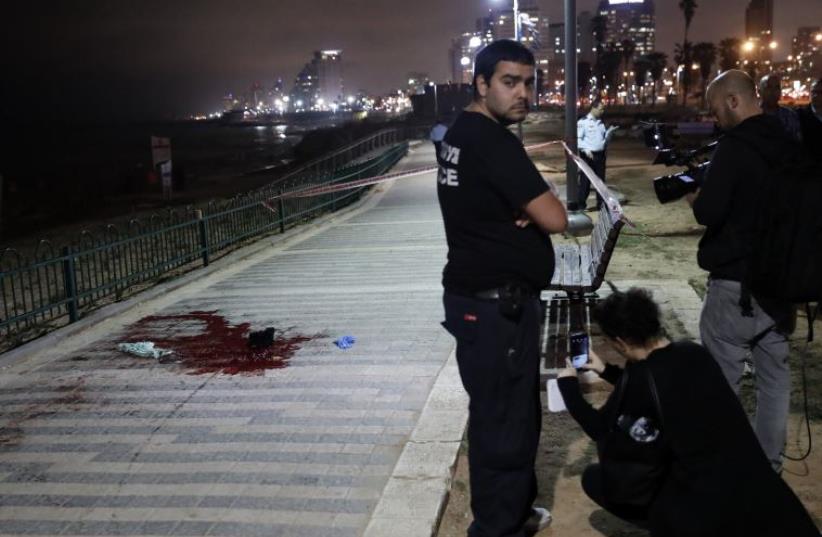 Scene of stabbing in Jaffa
(photo credit: THOMAS COEX / AFP)
Advertisement
Tuesday was an unusual day in the routine of terrorism. Five terrorist attacks, or attempted attacks, in three different places – east Jerusalem, Petah Tikva and Tel Aviv-Jaffa – which ended in the death of one person and left more than 10 wounded, purportedly signals an escalation.US Vice President Joe Biden’s participation in an event at the Peres Center for Peace in Jaffa, not far from one of the stabbings at the Jaffa Port and the Tel Aviv promenade, led to baseless claims that there was a connection between the attacks and his visit. The naked truth is that there was no connection. There also was no connection between the different terrorist attacks on Tuesday.Tuesday’s assailants fit in with what we’ve known for more than five months, since the beginning of the third intifada, in which 34 Israelis and some 180 Palestinians have been killed. They were lone wolf attackers who do not belong to an organization. The majority of them are teenage boys and men, but some are even middle-aged women. Their weapons have included everything at hand – kitchen knives or home-made submachine guns. It can happen anywhere. In the territories, east Jerusalem, or anywhere within the Green Line.This is an intifada that the Shin Bet (Israel Security Agency), Israel Police and the IDF are powerless in the face of. The terrorist attacks are not guided by any organization. The Shin Bet and security forces cannot gather intel on the attacks ahead of time. Therefore, they cannot be thwarted. In this reality, it is impossible to initiate steps, but only to react.The reality is one of accepting the situation.The public accepts the terrorist attacks as if they are God’s will, a cosmic event or an act of nature.On the one hand this approach shows national strength. The mantra that we must continue with our routines has been absorbed well.However, the public’s acceptance of the situation plays into the government’s hands. The ministers are not subject to criticism, and therefore they feel they can pull the wool over our eyes with nonsense proposals that have no chance of passing. And even if they do pass, they won’t change the reality.The only chance to perhaps decrease the scope of the phenomenon is a diplomatic initiative or a serious gesture of good faith from Israel. That is what the operational echelon – the IDF and Shin Bet – have recommended, and almost begged for, but the recommendations and the proposals fall on the deaf ears of the prime minister and his cabinet. They feel secure, because they have no public pressure on them to change the reality.In 1992, the murder of a young woman from Bat Yam sparked protests in the streets, which eventually led to elections which the apathetic and passive prime minister Yitzhak Shamir lost and Yitzhak Rabin ascended to the premiership.That is not happening this time. The majority of the public is apathetic and accepts the situation without challenge or a demand for answers from the government.In this situation, it is possible, unfortunately, that tomorrow or the next day, in a week, or later, all of a sudden by surprise, unnecessarily, another terrorist attack or attempted attack will occur. And once again the politicians, with media that do not want to expand their view beyond the tiles under their feet, will blame the Palestinian Authority, Hamas and incitement for being responsible for the situation, and will not take diplomatic steps that could possibly lessen the phenomenon.The unpleasant truth is that the government is a prisoner of its own right-wing ideology. It refuses to make concessions that would lead it to give up land and dismantle Jewish settlements on the West Bank, because such measures contrast its ideology. This is a routine of terrorism that costs us in lives, but its scope is apparently acceptable to all.