Some 300 people accepted the invitation and traveled to the Lower Galilee Arab-Israeli town of Arrabe from across the country. 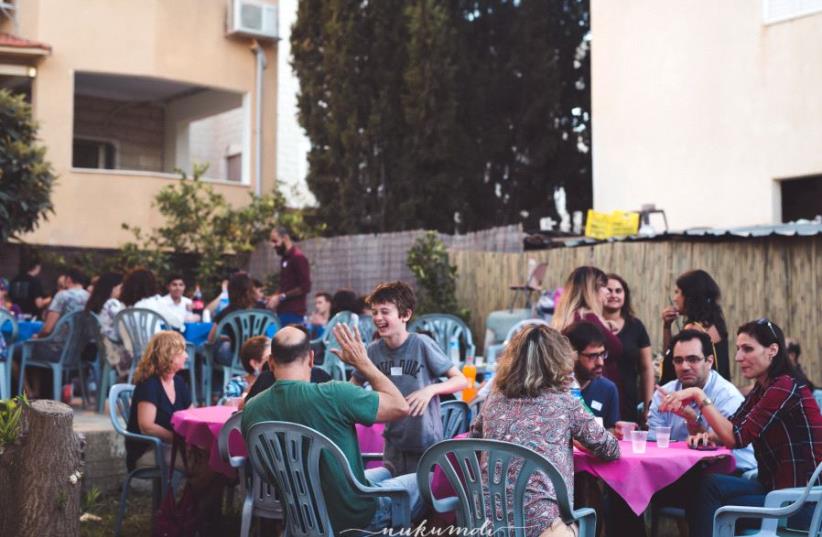 Palestinian-Israeli vlogger Nas Daily hosts 300 strangers for Iftar
(photo credit: YUKARI TURJMAN)
Advertisement
“When I made this event, lots of people told me I was stupid to post the GPS coordinates of my home to Facebook,” travel vlogger Nuseir Yassin told guests as his home on Saturday night, after he had posted an open invitation to his Facebook page Nas Daily to join his family in celebrating the end of Ramadan.Some 300 people accepted the invitation and traveled to the Lower Galilee Arab-Israeli town of Arrabe from across the country, with two guests even hailing from Spain and Hong Kong, to take part in the Iftar feast.Yassin is a 25-year-old videographer who 442 days ago began making daily one-minute videos from locations all over the world. Yassin has become somewhat of an international celebrity, with many of his videos going viral.The one-minute video he created from Saturday night’s fast-breaking event gained almost 200,000 views within hours of being posted on Sunday morning.“What you see behind me is 300 people from the Internet that I invited to come celebrate with my family the end of Ramadan,” Nas said in the clip. “But what happens when you invite a bunch of strangers to your home? My answer is: magic happens.“Because, yes, you can have strangers over and make friends with them. You can share your home GPS coordinates with 1,500,000 people,” he continued. “You can invite them to break their fast with you. And yes, one of these people could be a bad person. But for the 1% chance of something bad happening, I don’t wanna miss the 100% chance of something great happening.”“The Internet has become a breeding ground for racism, antisemitism and trolling, and Nas wanted to prove that there are good people on the Internet and it’s going back to basics,” said British-American immigrant Jessica Kosmin, who traveled to the event from Hod Hasharon. “The Internet was supposed to bring people together, and this was an example of it actually bringing people together.“It [the feast] was very homely and they [Nas and his family] were very welcoming. And you can totally see why Nas is the way he is because his parents are so open, kind, hospitable and educated,” she added.“This was a fabulous event where people got together from all over the country, and actually all over the world, to celebrate the holiday and multicultural, open, welcoming environment. Nas’s family was very warm, inviting and hospitable,” agreed Canadian-Israeli guest Tova Schoc, from Kiryat Tivon.Nas’s mother, Omaima Yassin, a special education teacher, was brimming with pride for her son. “We have been preparing for this event for a week,” she said, adding that while it may have been “crazy,” she did it out of love for Nas.The tables were overflowing with an abundance of traditional Arab food, some homemade by the Yassin family, some brought by friends and the remainder catered. Nas said that the $2,000 he spent on the evening was the most he had ever spent in a single day, but that he’d “never been happier to spend it.”“This is the best thing I’ve ever been part of so far,” he gushed.There were many immigrants in the crowd, in addition to Arrabe residents and Jewish and Arab Israelis from neighboring areas, as well as further afield.“It’s not easy to have 300 people you don’t know in your home,” said Yassin. Nonetheless, she said she had no hesitations about hosting the event and saw her guests “as good people, with good hearts, who believe in coexistence and peace.”