The meeting comes in response to a Palestinian request that was supported by Kuwait, Egypt and Jordan. 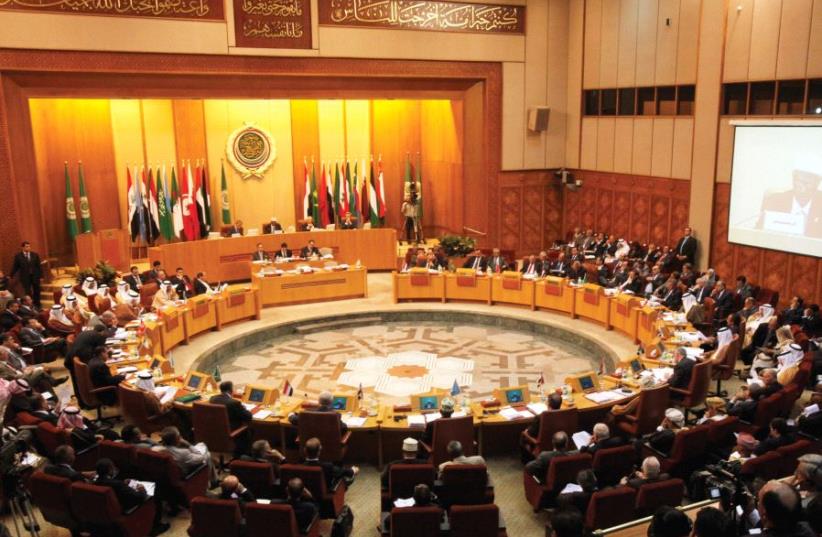 A GENERAL view of the opening session of the Arab Foreign Ministers meeting at Arab League headquarters in Cairo, in 2010.
(photo credit: REUTERS)
Advertisement
The Arab League is planning to hold an emergency meeting on Tuesday at the level of permanent representatives to discuss “the crimes of the occupation against the Palestinian people,” the assistant secretary-general for Palestinian affairs, Said Abu Ali, told official Palestinian news agency Wafa.He added that the league is closely following developments after the “Israeli massacre against peaceful civilians” on the Gaza border.
No Gaza inquiry, Israeli Defense Minister Liberman says, April 1, 2018 (Reuters)
Abu Ali called on the international community to put an immediate halt to “the Israeli crimes” and to provide protection to the Palestinian people.The meeting comes in response to a Palestinian request that was supported by Kuwait, Egypt and Jordan.Meanwhile, a Jordanian columnist advised the Palestinians that they should refrain from responding violently to the IDF’s killing of 16 protesters along the Gaza fence on Friday.“If the Palestinians respond by firing rockets, opening fire, stabbings or car rammings the results will be catastrophic for them,” wrote Jamal al-Nammary in Al Ghad daily newspaper.He argued that this will only bring heavier Israeli violence and alienate the international community.As it is, he wrote, “the Israeli crime in facing the peaceful protest will bring international sympathy for the Palestinians, encourage steps of solidarity with them and perhaps impose penalties on the occupation and restore the Israeli peace camp.”Nammary termed the Gaza protest “a new program of peaceful resistance” and said it was noteworthy that Hamas had adopted the march despite shunning that approach in the past.“This approach has been welcomed by those Israeli commentators who support peace and Palestinian rights,” he wrote.Nammary was typical of Arab world media reactions in terming the killings “a massacre.” Jordan’s foreign minister, Ayman Safadi, accused Israel on Sunday of “murder” in dealing with the protesters, some of whom threw petrol bombs and rolled burning tires, according to the IDF.“It’s an unacceptable escalation in Gaza,” Safadi said in Cairo at a joint press conference with Egyptian Foreign Minister Sameh Shukri, according to Reuters. “We condemn Israel’s violence against peaceful protests and the innocent lives who went to practice their right of expression to reject the occupation. Peace and security are our objectives. But peace won’t be achieved through oppression or murder.”Abdul-Bari Atwan, the editor of the London based pan-Arab website Rai al-Youm, lionized the Gaza protesters.“These young men sent a message to thousands of Israeli soldiers that we are here, rooted in the land and will not abandon even one centimeter of Palestine.”Speaking in a video, Atwan wrote that the Israeli troops are in a state of terror from these unarmed youth, who didn’t go to the border with missiles or Katyushas, just with the Palestinian flag.”Of Israelis, he said: “They tell the world ‘We are civilized and democratic.’ What civilization and democracy are they talking about when they open fire on unarmed people?” Atwan bitterly criticized Gulf countries he alleges are seeking to normalize relations with Israel. “This is the Israel the Arabs want to normalize with. It is a tragedy that they want to normalize even though the Israelis kill Arabs.”Atwan said Friday’s events show that “it has been 70 years since the nakba (catastrophe) and the flame is still burning in the hearts of the people.They expel Palestinians to refugee camps yet the people are still raising the banner of resistance. This people can’t abandon its homeland, dignity, Jerusalem. All the Palestinians everywhere are united on one thing, the right of return.”“The Israelis are not afraid of the Arab armies and the billions of dollars spent equipping them. They are afraid of the starving people of Gaza,” he said.He accused Palestinian Authority President Mahmoud Abbas of doing nothing to support the Gaza protesters.“You speak about popular resistance. Here is popular resistance, why not support it?” In Egypt’s Al-Ahram, columnist Makram Mohammed Ahmad argued that the toll of Palestinian fatalities and wounded points to a premeditated Israeli massacre.“Israel has arranged to commit this massacre before it happened,” Ahmad wrote. “She arranged the stage in the border and gave the troops orders to kill and open fire and drown [the Palestinians] in volcanoes of tear gas in addition to hundreds of snipers who had clear orders to open fire on the demonstrators.”“These events could have passed peacefully but the Israelis were ready to commit this crime,” he wrote.In contrast to Nammary, Ahmad does not think the Palestinians will gain from Friday’s events. “Although the Gaza events have raised the Palestinian cause again to the center of international interest, all efforts will fail because of the biased American position, the absence of international law and the continuation of the Palestinian division, which is still a point of weakness.”Closer to home, MK Jamal Zahalka voiced dismay in an article he distributed to journalists over the broad backing the IDF received in Israel.“It is important for us to point out that apart from a tiny minority of radical lefties, Israel has stood by its soldiers and supported them as they murdered unarmed Palestinians,” he wrote. “This includes the government, the army leadership, political leaders in both the ruling coalition and the opposition and the press, which has behaved like a royal mouthpiece and a media outlet dedicated voluntarily to the service of the army.”