Arab ministers in Cairo agree to maintain boycott of Qatar

Doha is not “understanding the seriousness and gravity of the situation,”say Arab diplomats. 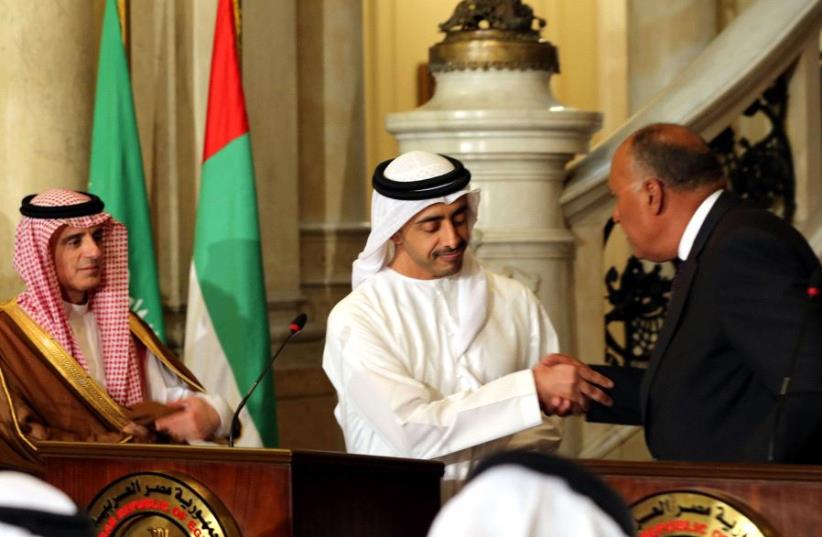 Saudi Foreign Minister Adel al-Jubeir, UAE Foreign Minister Abdullah bin Zayed al-Nahyan and Egyptian Foreign Minister Sameh Shoukry attend a press conference after their meeting that discussed the diplomatic situation with Qatar, in Cairo, Egypt July 5, 2017.
(photo credit: REUTERS/KHALED ELFIQI/POOL)
Advertisement
Senior diplomats from across the Arab world met in Cairo on Wednesday and rejected Qatar’s response to their demands, characterizing it as “negative.”“The political and economic boycott will continue until Qatar changes its policies for the better,” Saudi Foreign Minister Adel al-Jubeir told a news conference.“The response the four states got was overall negative and lacked any content. We find it did not provide a basis for Qatar to retreat from its policies,” Egyptian Foreign Minister Sameh Shoukry said, reading out a joint statement after the meeting.The four foreign ministers, from Saudi Arabia, Egypt, the United Arab Emirates and Bahrain, had assembled in Cairo to coordinate the next steps in their confrontation with Qatar.They said they would next meet in the Bahraini capital Manama, though they gave no date. Intelligence chiefs from the four countries also met in Cairo on Tuesday night, officials said.They had been expected to consider further sanctions at the gathering, but announced no new measures.Qatar’s response to the demands has not been made public.Several Arab states have applied severe economic pressure on Qatar over the last month hoping to convince the government there to curb its relations with Iran, the Muslim Brotherhood, and terrorist organizations such as Hamas. They are also demanding that Doha shut down Al Jazeera, the news network funded by the Qatari state.Speaking from Cairo, the four foreign ministers said they would provide a thorough joint response to Doha’s offer “in a timely manner.”But their initial reaction was to characterize the document as “negative.”Doha is not “understanding the seriousness and gravity of the situation,” the Arab diplomats said.Without resolution, even more punitive actions are possible that would compound Qatar’s woes: Bahrain’s foreign minister would not rule out expelling Qatar from the Gulf Cooperation Council.Egypt’s Shoukry issued a statement on behalf of the group saying that all four nations represented in Cairo are committed to international law, to fighting terrorism and to ending incitement, and thus “cannot accept Qatar’s destructive role” in the region any longer. Doha continues to “interfere in the internal affairs of states,” Shoukry said.Arab capitals gave Qatar until Monday to respond to their 13 demands, but offered a 48-hour extension at the last minute. After submitting responses, Qatar’s foreign minister spoke from London and labeled the Arab blockade as an aggressive siege: “The answer to our disagreement is not blockades and ultimatums – it is dialogue and reason,” he said.Jubeir said he hoped Turkey would remain neutral in the dispute.Turkey, the biggest regional power to stand by Qatar, has sent to Doha 100 cargo planes with supplies since its neighbors cut air and sea links. It has also rushed through legislation to send more troops to its base in Doha.Turkish President Recep Tayyip Erdogan on Sunday dismissed calls for closure of the base and said the list of Arab demands amounted to an unlawful intervention against Qatari sovereignty.Kuwait and the United States have assumed mediating roles in the crisis. US President Donald Trump is actively engaging regional players and phoned Egypt’s President Abdel Fattah al-Sisi from Air Force One on Wednesday to discuss developments out of Cairo.The US president “called on all parties to negotiate constructively to resolve the dispute, and he reiterated the need for all countries to follow through on their commitments made at the Riyadh Summit [in May] to stop terrorist financing and discredit extremist ideology,” the White House said in a description of the call.Two days earlier, Trump wrote on Twitter that “interesting things [are] happening” with respect to Qatar, offering no details.While the US government supports many of the policies motivating the Arab blockade, it faces a practical challenge, as Qatar hosts the America’s largest military base in the Middle East.Reuters contributed to this report.