The attack comes at a time of greatly increased tension in the Israeli capital following Friday morning's deadly terrorist attack on the Temple Mount. 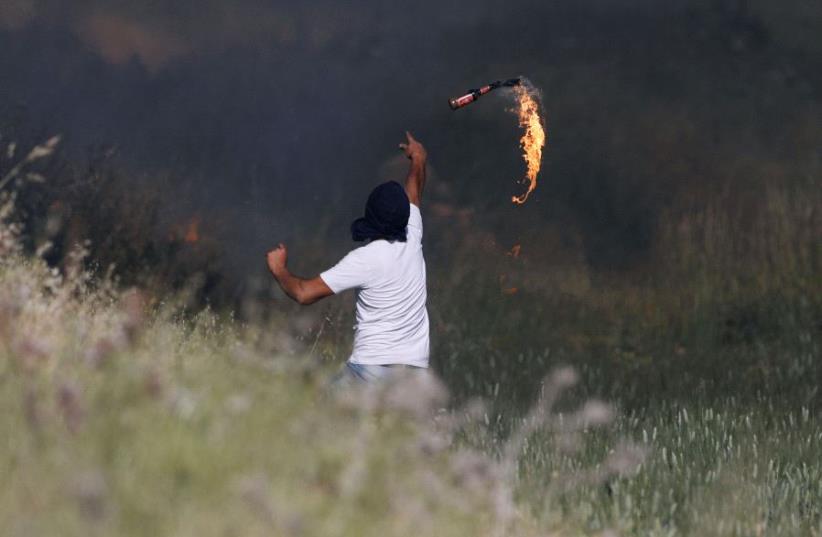 A Palestinian protester hurls a molotov cocktail towards Israeli troops during clashes at a protest in support of Palestinian prisoners on hunger strike in Israeli jails, near the Jewish settlement of Beit El, near the West Bank city of Ramallah May 11, 2017.
(photo credit: REUTERS/MOHAMAD TOROKMAN)
Advertisement
A two-month old baby and two adults were lightly injured on Friday afternoon when a Molotov cocktail was thrown at the vehicle in which they were traveling in the Silwan neighborhood of Jerusalem.According to a hospital statement, the three were taken to Jerusalem's Hadassah Ein Kerem hospital where they were treated for injuries resulting from smoke inhalation.Israeli police and Border Police forces are working to identify and locate the perpetrators of the attack.The attack comes at a time of greatly increased tension in the Israeli capital following Friday morning's deadly terrorist attack on the Temple Mount. Three Arab-Israelis from the northern Israel town of Umm al-Fahm killed two police officers and injured three others in a shooting attack. The perpetrators were shot dead at the scene.The slain officers were named by Israel Police as Hail Stawi, 30, from Maghar and Kamil Shanan, 22, from Hurfeish both in northern Israel.The attackers were later identified by the Shin Bet as 29-year-old Muhammad Ahmad Mahmoud Jabarin, Muhammad Ahmed Fadel Jabarin 19, and Muhammad Hamed 'Abd al-Latif Jabarin, 19, from Umm el-Fahm in northern Israel.