Construction of border fence may lead to flare-up with Hezbollah, IDF warns 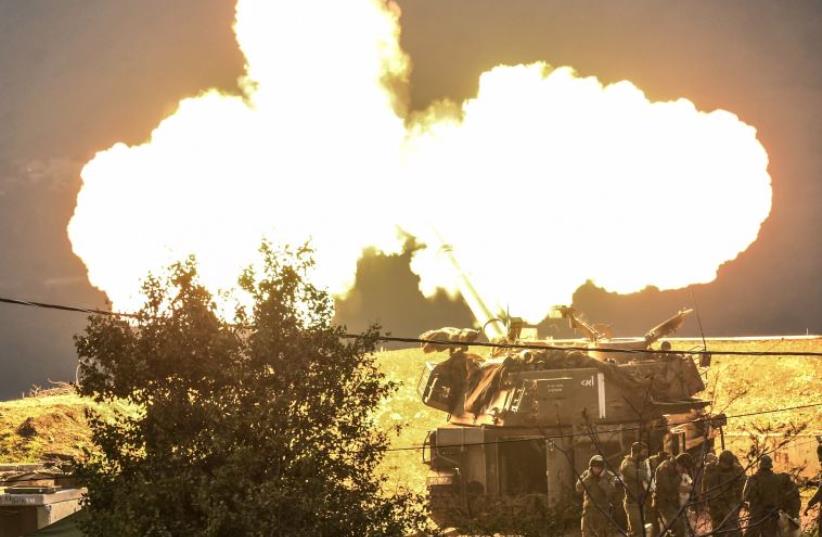 An IDF self-propelled gun fires a shell into Lebanon, January 4, after a roadside bomb exploded next to an army patrol on the northern border
(photo credit: REUTERS)
Advertisement
The building of barriers near the Lebanese border might lead Hezbollah to attack before their opportunity is gone, a counterterrorism expert said Monday.Nitzan Nuriel, the former director of the Counter Terrorism Bureau at the Prime Minister’s Office and former deputy commander of the IDF’s Galil Division, said that while Hezbollah might not make any moves on the Syrian border, the building of the barriers designed to prevent infiltrations set to begin next month may push the group to act from Lebanon.Comparing the Lebanese border to the Gaza border Nuriel, on a conference call with journalists on Monday, said Israel is building a new type of barrier that can remove threats of terror tunnels and ground attacks.Nuriel said Hezbollah and Hamas in Gaza must decide whether or not to use the strategic capabilities before the construction of the barriers are completed, and stressed that if they do use them they are taking the risk that will lead to either a third Lebanon war or another major military operation in Gaza.IDF Chief of Staff Lt.-Gen.Gadi Eisenkot has accused Hezbollah of continuing to prepare themselves for war in villages, cities and towns south of the Litani River, “arming itself with more lethal and accurate weapons to harm the Israeli home front.”The army is concerned not only by Hezbollah rocket barrages, but the possibility of ground attacks against civilian communities on the border.This has led to Israel to invest significant amounts of money and effort into strengthening its defenses along the border with Lebanon over the past years, creating obstacles such as artificial cliffs and building high concrete barriers to help prevent ground attacks.The border fence with Lebanon was originally built in the 1980s, and while sections of it have been upgraded several times – including most recently in October when a 29-km.stretch was upgraded with engineered barriers including reinforced concrete panels of several feet high and concrete blocks and fortified watchtowers - it is said to be in poor condition.The border area with Lebanon has been flagged by the IDF as vulnerable to enemy infiltrations and has seen several incidents in the past few months where individuals have crossed the border, including last week when an Israeli citizen crossed into Lebanon and in April when an unarmed Lebanese citizen walked several kilometers to Kiryat Shmona before being arrested.According to Haaretz, the upgraded border security fence will be built along two stretches of the border stretching between Rosh Hanikra on the northern Mediterranean coast and the kibbutz of Misgav Am near Kiryat Shmona, as well as between Rosh Hanikra and Hanita, northeast of Nahariya.It is expected to be similar to the “smart fence” that runs along the border with Egypt and some 30 km. along the border with Jordan. The steel and barbed wire fence will be six meters high stretching several kilometers with information collection centers and warning systems. It is expected to cost NIS 120 million.Israel fought a 34-day war against Hezbollah in 2006, and since then hostilities between them have been limited to occasional firing across the border and reported air strikes by Israel against Hezbollah leaders and military equipment in Syria, where the group is fighting in support of President Bashar Assad.Due to its fighting in Syria, the group has grown significantly in terms of technological advances, along with battlefield experience, and is considered Israel’s most dangerous enemy.Last week, Hezbollah leader Hassan Nasrallah warned that “hundreds of thousands” of Shi’ite militiamen would volunteer to fight with the group against Israel if it should attack Syria or Lebanon.“The Israeli enemy should know that if it launches an attack on Syria or Lebanon, it’s unknown whether the fighting will stay just between Lebanon and Israel, or Syria and Israel,” he said.