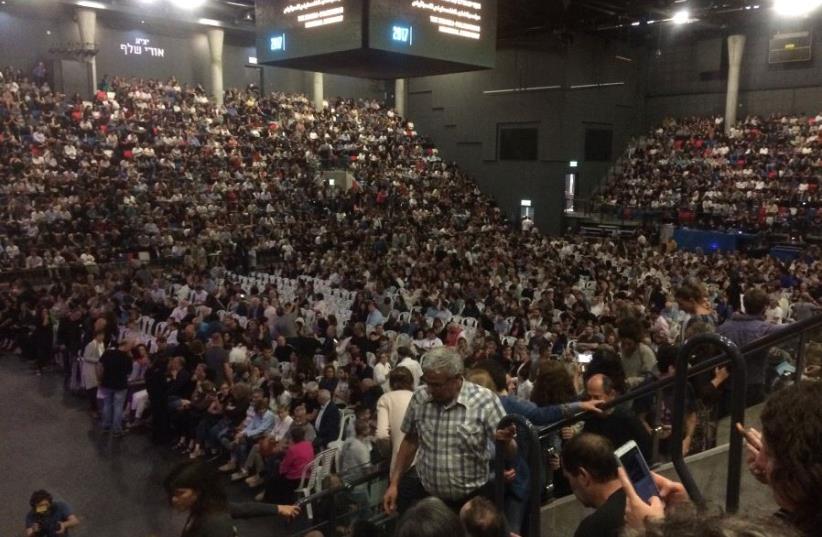 Thousands attend joint Israeli-Palestinian memorial day ceremony in 2017.
(photo credit: UDI SHAHAM)
Advertisement
Defense Minister Avigdor Liberman prevented the entrance of 110 Palestinians to Israel, who were planning to attend the joint Israeli-Palestinian memorial ceremony in Tel Aviv next week, on Remembrance Day for the Fallen of Israel’s Wars.In a statement issued on Tuesday, Liberman said: “I will not allow the desecration of Remembrance Day. This ceremony is not a memorial event but a display of bad taste and insensitivity that harms our dear bereaved families.”In response to the decision, Combatants for Peace and the Parents Circle-Families Forum – the organizations that organize the ceremony – said that the defense minister is the one who is desecrating the memorial with his actions.“He is harming Israeli and Palestinian bereaved families who seek to promote a discourse of reconciliation,” a statement said.“This is a political and cynical use of a tool that is meant to be for security purposes, a use whose whole goal is to deal a blow to Israeli and Palestinians bereaved families that seek to commemorate Remembrance Day together, out of the mutual respect and recognition that pain and sorrow are not the exclusive legacy of any side.”Meretz chairwoman Tamar Zandberg said that Liberman is trying to score political points “on the backs of the families who paid the price of this conflict with blood.“Liberman wants to make Remembrance Day into a controversial issue, and use his security authorities to prevent the families from commemorating it as they wish,” she said.“They want to do it in peaceful ways, with a true will to stop the bloodshed. The Netanyahu-Liberman government wants to use the bereavement to create division among Israeli citizens,” she added.This would be the 13th consecutive year that the joint ceremony would be held.It was recently announced that Man Booker International Prize laureate David Grossman, who lost his son Uri in the Second Lebanon War in 2006, would be one of the main speakers at the ceremony. Grossman will receive the Israel Prize on Independence Day.Last year, far-right activists gathered near the entrance to the hall where the event was held, shouted at the attendees and called them “traitors” and “Nazis.” Some protesters spat at the attendees entering the hall and threw water bottles at them.A tweet that appeared on the Twitter account of Education Minister Naftali Bennett after the event said that “if the report is true, I expect from people who grieve over the murderers of babies and people who blew up buses that they be a bit less sensitive about spitting, pushing and water.”Bennett then deleted the tweet, denied that he was the one who wrote it, and said that a student working for him tweeted it from his account.“So when I was visiting the family of Emmanuel Moreno, one of my students tweeted a pointless tweet, and there is a commotion. Relax, this is Remembrance Day,” he tweeted.