300 Jewish activists from around the world joined Israelis and Palestinians in the West Bank over the weekend to reconstruct what they claimed was a former Arab village near the settlement of Maon. 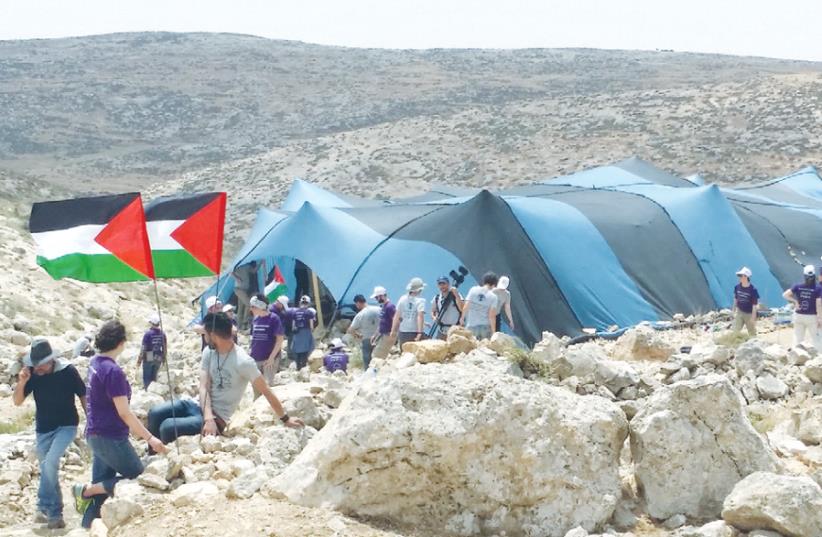 PROTESTERS PITCH tents in the West Bank over the weekend, rebuilding what they claimed was a former Arab village on the site.
(photo credit: MAX SCHINDLER)
Advertisement
Some 300 Jews from around the world, together with Israelis and Palestinians, camped out near the settlement of Maon in the West Bank over the weekend rebuilding what they claimed was a former Arab village on the site.The activists, most of whom hail from the leftist Center for Jewish Non-Violence, pitched tent pegs on the rocky rubble of caves that once housed Palestinians in the village of Sarura, just south of the Jewish settlement.“As Jews, we know the importance of liberation and freedom,” said CJNV head Ilana Sumka.While the West Bank draws its hefty share of international activists, the protest participants, mostly in their 20s and 30s, emphasized the uniqueness of hundreds of Jews volunteering alongside Palestinians.“The turnout is a clear indication of a widespread rise in activism among Jewish communities to fight against the occupation,” said Sumka.Josh Hasten, director of the pro-settler group Regavim, said the activists were naïve about the security situation and complicated facts of property ownership, calling many of the Palestinians who remain in the South Hebron Hills “illegal squatters.”“It’s disappointing that someone would fly all the way over here to cause chaos and annoy and disturb people on the Sabbath,” Hasten said, labeling the activists as “full of hate for other Jews based on their geography in this country.”Fadel Aamar, 55, said his family once lived in Sarura, pointing to a nearby cave where his brother was born, claiming he held an Ottoman tabu, or land-title deed to the property.
Trump tells Israel to "hold back on settlements" during meeting with Netanyahu at White House on Feb. 15, 2017 (credit: REUTERS)
“This is the first time we return to the land to rebuild and fight,” Aamar said, trembling as he looked around.Approximately 10 Palestinian families dwelled in Sarura until the IDF removed the seasonal residents in 1999 – sealing the caves and prohibiting their return – according to a report from the left-wing human rights organization B’tselem. The army subsequently declared the site a closed military zone, saying it was needed for infantry target practice.The firing zone sits next to several Jewish settlements, including Maon.Following a petition by Palestinian residents, the High Court of Justice ruled in 2002 that the residents could return pending mediation, but talks broke down and subsequent litigation hasn’t changed the land designation.A spokesperson for COGAT – the army unit that administers the area – declined to comment on the protest, which occurred in Area C, or the part of the West Bank under direct Israeli control. A representative from the settlement of Maon could not be reached as of press time.The CJNV-led trip also brought 140 international Jews to volunteer in other West Bank locales where they have gardened and cleared fields in Umm al-Kheir and Sussiya. Other activists volunteered in east Jerusalem including in Isawiya, and in Hebron.On Friday morning, participants traveled from Jerusalem and Tel Aviv to the isolated hamlet, passing jagged retaining walls – all that remains of the cave dwellings.Clad in purple shirts emblazoned with the slogan “Occupation is not my Judaism,” activists labored under the hot Judean sun, and some hoisted Palestinian flags. They cleared and lined the road, stacking stones on the crumbling sides of former dwellings, along with rebuilding terraces and cleaning out the sealed shut caves.Friday evening, Muslim participants prayed while Jewish activists took shifts watching out for settlers or the army. Jewish activists then held a traditional Kabalat Shabbat prayer service that welcomes the Sabbath, while their Palestinian partners kept watch.One participant, Larry Rubin, said volunteering in the West Bank reminded him of his civil rights work half a century ago.“Through nonviolence, we changed the legal structure of the [US] South, we got rid of segregation,” said Rubin, who helped register black voters in Mississippi during the 1960s. “Here, in the West Bank, we also see a whole people stripped of their rights.”The protest was organized by a joint Palestinian-Israeli coalition, including the Hebron-based Youth Against Settlements, the Bethlehem- centered Holy Land Trust, Combatants for Peace and All That’s Left: Anti-Occupation Collective, along with CJNV.As they labored, activists noticed an IDF or settler drone hovering above Sarura. Around 5 p.m. on Friday, three settlers drove by the encampment, two on motorbikes and one driving an ATV. They circled the site a few times, and before departing wished the activists a “Shabbat shalom.”Later on Saturday night, activists at the scene reported that two dozen soldiers approached the site and tore down the tents. Eyewitnesses claimed that the soldiers pushed some of the activists in an attempt to evict the illegal encampment. A standoff then ensued, and soldiers eventually left the scene without detaining anyone.