The denial was issued following a fierce backlash from the Egyptian public, targeting Foreign Minister Sameh Shoukry's apparent fraternizing with the Jewish leader. 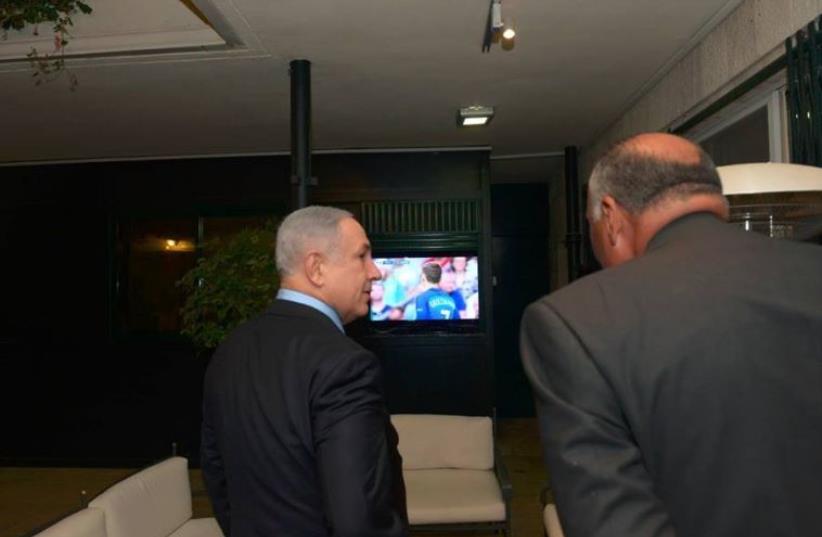 PM Netanyahu with FM Shoukry in Jerusalem
(photo credit: TWITTER)
Advertisement
The Egyptian government on Thursday issued a denial that its foreign minister and Prime Minister Benjamin Netanyahu had watched the Euro 2016 soccer final together in Jerusalem after the premier posted a photo of occurrence on social media, according to Iranian state news agency Press TV.
The denial was issued following a fierce backlash from the Egyptian public, targeting Foreign Minister Sameh Shoukry's apparent fraternizing with the Israeli leader.
A spokesperson for Egypt's Foreign Ministry issued a statement shortly thereafter saying that Shoukry had merely stumbled into the living room where the game was playing while visiting the prime minister's residence in Jerusalem.
“Netanyahu brought a cameraman to record everything that was happening," the spokesperson claimed in the statement. "The Egyptian foreign minister doesn’t watch soccer games during a formal and important visit such as this."
Netanyahu had posted to Facebook and Twitter a photo of the two watching the match between Portugal and France on Sunday, with the former winning 1 to 0.

Tonight Sara & I hosted Egyptian FM Sameh Shoukry in our Jerusalem home. We made time to watch the #Euro2016Final. pic.twitter.com/30zQnBj6LY

“This evening my wife Sara and I hosted Egyptian Foreign Minister Sameh Shoukry in our home in Jerusalem," the Netanyahu post reads.
"He arrived today for a visit to Israel. When our meeting ended, we had time to watch the Euro 2016 final,” it added.
Shoukry's visit last week was the first high-profile visit by a senior Egyptian official in over a decade.
After the post went public, a number of social media users and public figures began denouncing Shoukry's friendly moment with the prime minister.
“I would understand if our foreign minister would watch a game, a movie or a play with an Arab official, who is a friend... But not an Israeli official,” Imad ad-Din Hussein, an editor from the Egyptian in the daily newspaper al-Shorouk, wrote in the publication.This “dastardly” regime “is the main reason for most disasters in Egypt,” he added.