Egyptian Ambassador to Israel: Chaos will break out without peace with the Palestinians

The Egyptian ambassador is expected to address the Knesset on Tuesday on the 40th anniversary of Anwar Sadat's visit. 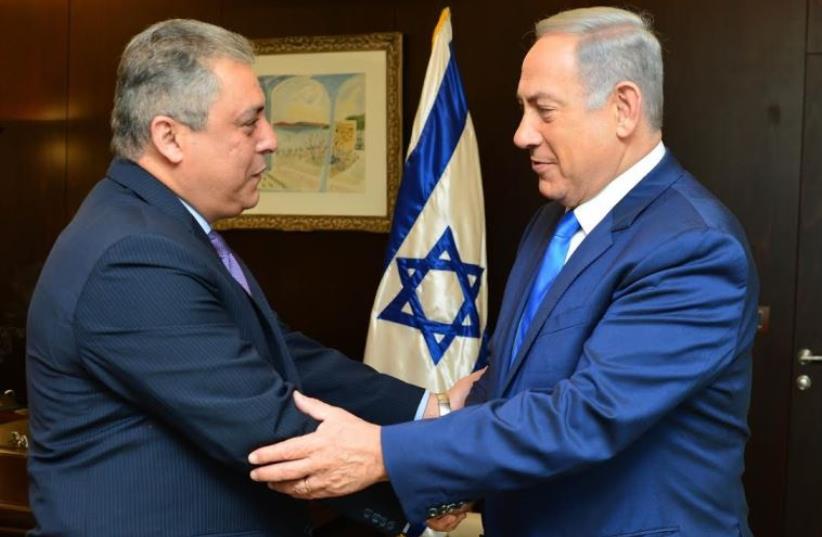 Prime Minister Benjamin Netanyahu meets with new Egyptian Ambassador Hazem Khairat in Jerusalem, February 29, 2016
(photo credit: KOBI GIDEON/GPO)
Advertisement
Egyptian Ambassador to Israel Hazem Khairat urged Prime Minister Benjamin Netanyahu in an interview with Army radio to take historic steps for peace, warning that without a two-state solution, chaos would break out.“We have to be optimistic there is no other option (to two-states), without this chaos will break out everywhere, this is our last option, for you and for all of us,” Khairat said. His interview comes before a series of special ceremonies in the Knesset to mark the 40th anniversary of former Egyptian president Anwar Sadat’s visit to Jerusalem, an event that paved the way for the peace deal between the two countries.Khairat and Netanyahu are both expected to deliver speeches.In speaking with Army Radio, Khairat referenced Sadat’s speech to the Knesset and said that those "who bear responsibility have to be brave and take fateful decisions.”Egypt is asking the Israeli public to help its leadership arrive at an overarching and just peace, Khairat said.“Wars do not bring calm and security, peace is the only true solution,” Khairat said. A permanent peace based on two states is the only way to achieve peace."Khairat urged the Israeli public to reread Sadat’s speech and the 2002 Arab peace initiative which offers Israel normalized ties with its Arab neighbors in exchange for a return to the pre-1967 and minor land swaps.If this were to happen Israel would find herself living in peace, calm and security with her neighbors, Khairat said.He said that diplomatic ties between Israel and Egypt are strong, but the absence of a final resolution to the Israeli-Palestinian conflict has harmed the full normalization ties between the two peoples.But, the fact that the Israeli-Egyptian peace has held for 40 years shows that there is a commitment and a desire to strengthen the ties between the two countries.